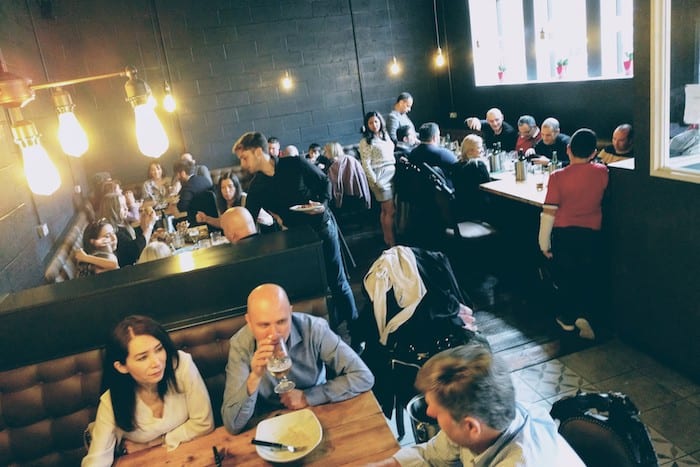 You might not expect to find a gem of an Italian restaurant outside the city centre. But Vero Moderno on Chapel Street is just that.

The cosy neighbourhood restaurant opened in 2016, and was soon included in a list of “three of the best modern Italian restaurants” in The Sunday Times. Reviewer Lisa Markwell wrote that it “has quickly earned a reputation as a serious Italian”. In 2017, it was awarded an entry in The Good Food Guide.

Two things set this place apart. One is the warmth and friendliness of the welcome – largely thanks to owner Beppe, who hails from Rome. The other is the menu.

We’ve been before but they have recently launched a new seasonal winter menu, so we went to try it out.

‘Vero moderno’ translates as ‘true and modern’. Authentic ingredients are carefully sourced from Italy and treated with respect, while some unusual dishes offer a contemporary take on Italian cuisine. 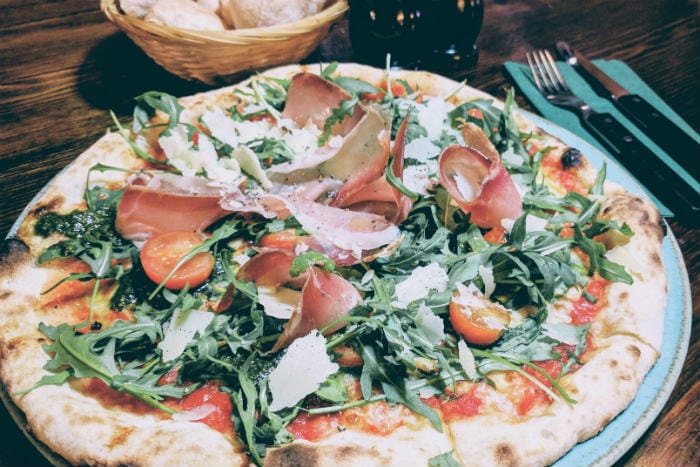 As you might expect, the winter menu features lots of seasonal ingredients like root vegetables to produce heartier versions of their summer dishes.

There’s no spaghetti bolognese or lasagne here. There is pizza though, made using an authentic, slow maturing dough rising recipe which takes up to 48 hours to complete. The chef, unsurprisingly, is from Naples.

Pizza campione is so-called because it’s a champion, says Beppe. Topped with creamed butternut squash, Gorgonzola cheese, smoked pancetta, Parmesan and cherry tomatoes marinated in oregano, it was once named the world champion in Italy.

Ingredients all have to work harmoniously to bring a dish together, believes Beppe. And that’s evident in the ravioli of the day, which on the evening we visit is made with halibut and courgettes, with lemon butter and a raspberry reduction. “In Italy berries with fish is a popular combination these days,” he explains.

New menu items include mussel meatballs. “They’re not made with any beef or pork meat, it’s just the meat from the mussels,” says Beppe. “It’s the modern way, with just a bit of fish to bring it all together. It’s the beautiful texture of mussels, but without getting your hands messy.” 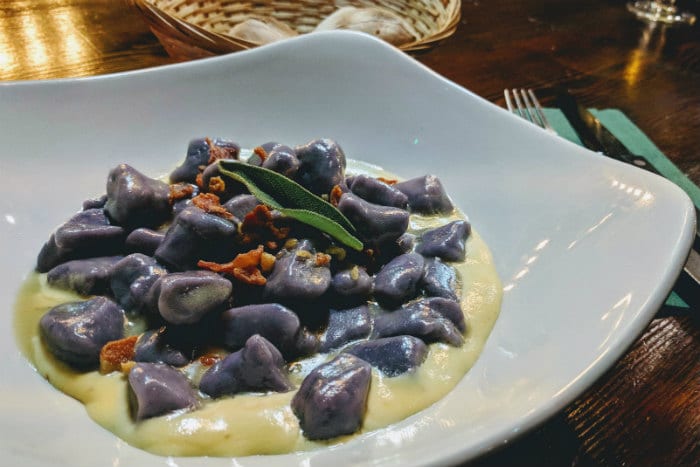 Black squid ink gnocchi has been replaced for autumn with purple potato gnocchi with Parmesan cheese fondue, crumbled walnuts, and speck – a smoked dry cured ham from the north west of Italy. There’s a new spaghetti dish with cauliflower, chilli, garlic and breadcrumbs.

A seasonal starter of chicken with savoy cabbage and saffron is wrapped in filo pastry parcels, oven baked and served with red pepper sauce. Risotto comes with pumpkin and aged Gorgonzola. Wild sea bream comes as a millefeuille made with layers of potato and fish.

Sadly, there’s no fresh tuna steak in sesame seeds the day we visit. It’s a dish I’ve been eyeing up on their social media. But Beppe’s explanation instills confidence. “We couldn’t get any today from the supplier. And when it’s fresh sashimi grade tuna like that, served rare, you don’t want to take any gambles. I’d rather be honest.” 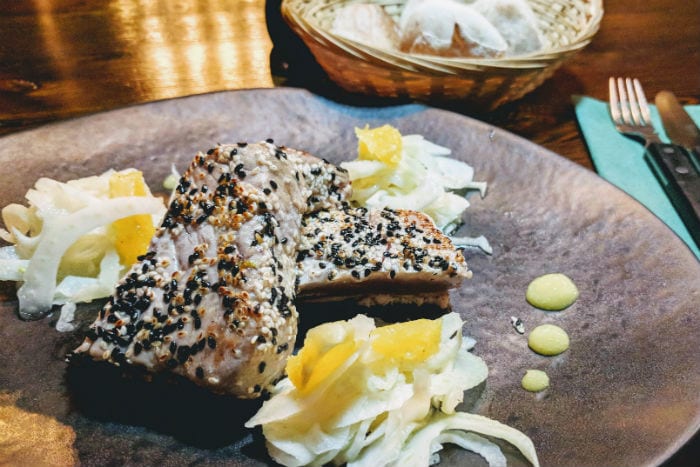 It’s hard to decide what to order. We start with a basket of bread, baked fresh daily, while we choose. There’s stone baked ciabatta, and focaccia flecked with fragrant dried oregano, with the purest of olive oils and balsamic to dip. It’s delicious.

On to starters, and we opt for calamari and king prawns. The seared baby squid is served on a silky, autumnal Jerusalem artichoke puree with toasted hazelnut, while the huge freshwater prawns are started off in a pan and then wrapped in a foil parcel and finished in the oven to seal in the flavour. They’re fat and buttery, and served in the shell. “Like little lobsters,” says Beppe.

We pair the crustaceans with a Soave white wine from the hills of Verona, dry but rounded, full of citrus and gooseberries, its zestiness a fine match for seafood. 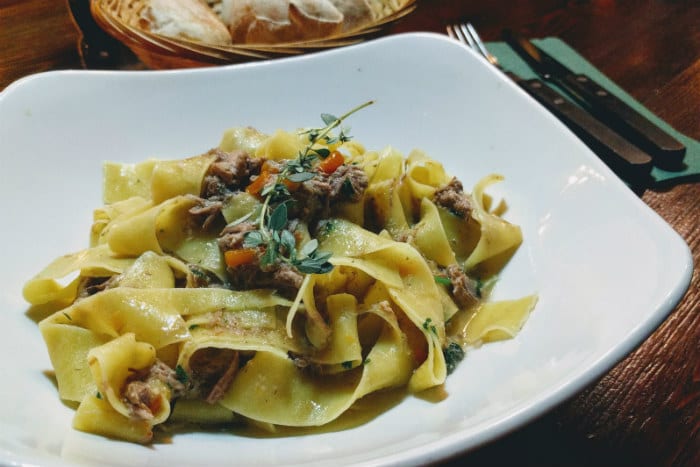 When it comes to mains, I can’t resist pasta. What’s more comforting than a warming heap of carbs? It doesn’t disappoint. The fresh egg pappardelle ribbons are drenched with slow cooked lamb ragu, served bianco – so white, rather than cooked with tomato sauce.

The lamb shoulder has been cooking slowly for five hours with white wine, onion, celery and carrots. As it cooks down, they add more wine. It’s hearty and rich and feels nourishing. A hug in bowl. A glass of Nero D’Avola Sicilian red wine cuts through the fattiness nicely.

Sausage and mash has a twist. The meaty, lightly spiced sausages were named the best in Italy in 2015, says Beppe. Packed with flavour, they’re roasted and served with creamy mash made with cannellini beans. It’s 60% cannellini beans and 40% potato – I ask because I want to recreate it at home. 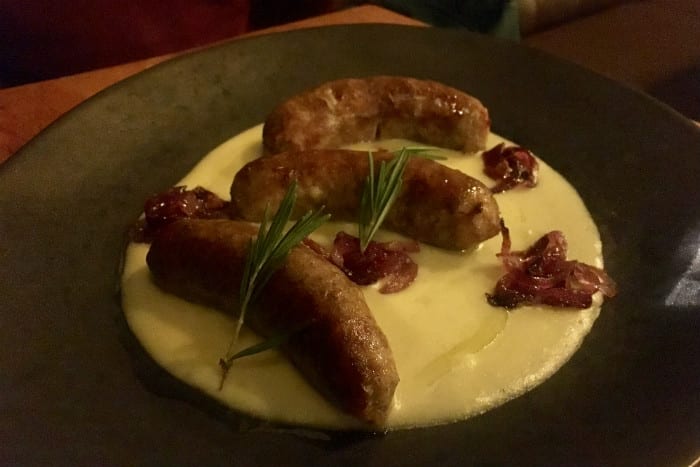 I’ve had many a lemon sorbet doused in vodka, but this one is whisked with limoncello and prosecco, light and palate cleansing. Like a citrusy prosecco slushy.

It’s an accomplished menu, full of rewards. They also do Italian-style roasts every Sunday, and every Tuesday you can get two pizzas and a bottle of prosecco for £30.

Well worth seeking out, Vero Moderno could well become your new favourite Italian.