Vermilion Cinnabar Reviewed – The Mother Of All Prawns 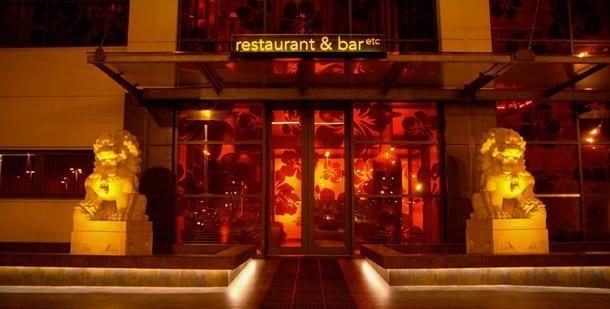 We haven’t been to Vermilion Cinnabar since its launch five years ago and remember it as a stunning venue somehow incongruously set, well there’s no nice word for it, on an industrial near the Etihad stadium.

It had slipped off our radar, not because it wasn’t good but because it is on the other side of town. A good £6-8 cab fare unless you have a designated driver which we did in Ginger, though comments like ‘I don’t do roundabouts’ were a little alarming.

The venue was originally built to service the glossy high powered casino near the home of Manchester City Football Club, but that never happened, so it stands alone, a little lost and lonely among the warehouses and other businesses.

It still looks good, that’s the plus of being out of town, it means that there is heaps more space than in the city centre.

“…red and black with giant pieces of oriental kitsch…”

The restaurant is sumptuous, red and black with giant pieces of oriental kitsch, with doors that shish open like Star Trek (the Gay and Chadders love a good entrance) and the upstairs bar – the Cinnabar bit (open to 2am, three night a week) is kooky and cool with giant fruit coloured lights and swing booths.

The food is a fusion of Indian, Thai and Asian. They are the only venue in Manchester to exclusively serve giant prawns. Ocean Tiger Prawns to be exact, although we were a little bemused when the amuse bouche came, and mistook this for the signature dish – as delicious a morsel they were in no way giant.

Then the real ones arrived. These aren’t just any prawns, these are the mother of all prawns. Like, the monster in Aliens. They cover a whole plate, and are as delicious as they look. 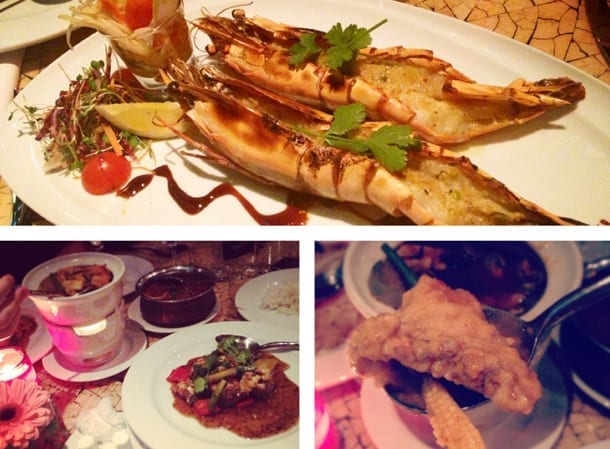 One part is flavoured Thai style and the other under the influence of India. It was like eating the best bits of a lobster without all the fuss. The texture was slightly different to what you may expect, and the Gay pointed out it’s because they’re grilled.

Still juicy, zesty and bursting with flavour, they are worth a drop in if you’re in the area in their own right. At £20 a pop, they’re not cheap, but would do for lunch without much else. You get what you pay for.

The other and a bit unexpected hit of this dining experience were the cocktails which Gay and Ginger adored, drinking Mai Tai’s and Raspberry Cosmos. 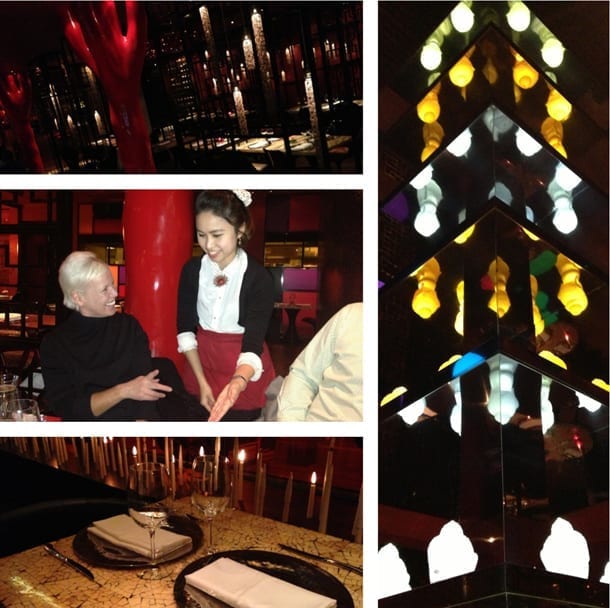 For our review we had a cross section of dishes pre-selected for us to try, showcasing a variety of flavours and gave us a more eclectic insight into the culinary delights on offer.

We’re used to trying out signature dishes etc but not having an entire meal planned. The problem with that is that you don’t really peruse the menu looking for what you want. Considering that, we weren’t disappointed.

So for the good bits of that: the Lamb Massama curry which is slowly cooked was gorgeous, the meat tender and velvety, the flavours intense but not too in your face, we all agreed, this was a very tasty dish, especially served with a mountain of steamy, fluffy boiled rice.

The crayfish and blackbean however caused a split decision, Dubai and Ginger loved it, but Chadders and the Gay found it not to their liking at all, finding the taste a bit ‘tepid’. Each to their own.

The third dish which was a Jungle curry wasn’t really one for us. The boys thought it too spicy (who are wussies according to Chadders (who could handle the kick). The red snapper fishiness in a strong curry was a flavour too far. Which was a real shame, and may have been slightly too much of an Asian amalgamation, which our pallets were simply not used to. Hey, you might be more cosmo than us, come ‘n’ have a go if you think you are. 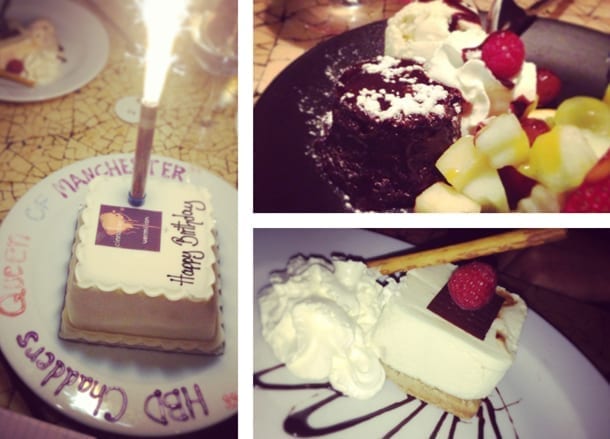 It was onto puddings and a revolt by us diners against just the chosen for us chocolate torte. Also, Dubai tucked into white chocolate cheesecake, which was deemed ‘truly excellent’. Ginger had the warm chocolate pudding, which he described as delicious. Chadders and Gay were too full, but as an extra special ‘bday’ treat for the lovely Chadders, we where given a birthday cake with a personalised message, a huge sparkler and the staff singing – smiles all round.

In terms of pricing, it’s a little hard to know what to make of Vermilion Cinnabar, with starters ranging from £4.95 for poppadum’s to £20.00 for the King Tiger Prawns, mains averaging £15 and house wine from £19, coupled with getting there it’s quite a hefty night out, but well worth the effort. This is the sort of place you’d plan to go to, with the expectation of price anyway. A feast fit for an emperor.

We’d certainly take advantage of the late licence bar after our food had settled.

We would definitely look them up for the giant prawns, and make it the venue of choice for a special occasion.