Veeno Wine Café: a touch of the Amalfi Coast in Manchester

The name may be a quaint corruption of the Italian for fermented grape juice, but the owners of Veeno know a thing or two about wine and nibbles, says George Matthews 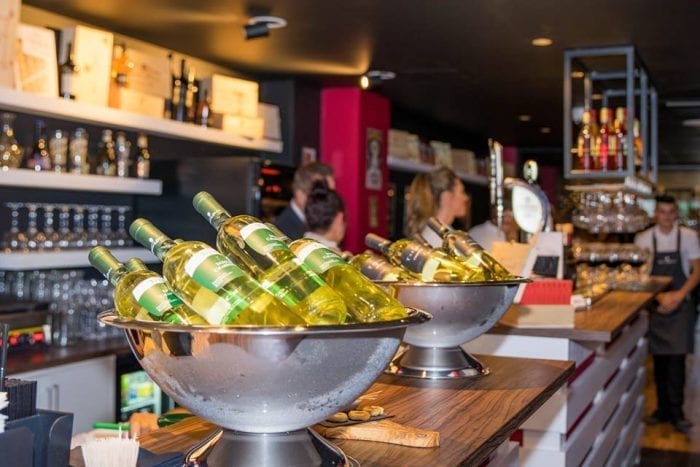 Veeno is an Italian wine café which opened its flagship branch in Manchester about two years ago, followed by four further sites around the country with three more in the pipeline.

“the ideal place
for sharing a
bottle of wine
and some nibbles
after work.”

Unpretentious in outlook, the wines are given nicknames such as the ‘Our Classic’ red and ‘The Mid-Dry’ white so you will find something for you, even if your normal approach to choosing wine is ordering the second cheapest bottle on the list in an attempt not to look cheap.

The outside feels a little like a hangover from Christmas, with lacklustre fairy lights in the window. Inside, however, it’s more Malmaison meets Carluccio’s, with red walls and soft lighting, decorations made from corks and Italian foodstuffs dotted around. The Easter eggs wrapped in garish sheets of brightly-coloured foil reminded me of a family holiday in Sorrento.

I indulged in their Classic Winetasting menu (normally £19.90 per person) – a flight of six wines, complete with tasting notes and paired spuntini (nibbly bits). All the wine sold is from Caruso & Minini, a Sicilian vineyard owned by the founders of Veeno, and the tasting selection is a great introduction to their wares.

The Tasari Catarratto is a morish dry white and goes well with the breads and olive oil, although the bread was not as fresh as it could have been. The olive pâté was almost buttery and thankfully lacked the unpleasant bitter saltiness so often present in a French tapenade and made a great accompaniment to the crisp yet fruity Giumara Inzolia.

In contrast to the whites, the reds felt more pedestrian.  I would avoid the Giumara Nero d’Avola unless you are into a particularly acidic red with hard-hitting tannins, almost to the point of being metallic.

Concluding the menu with a shot of Marsala, the tiramisu was my food highlight. Soft sponge, bitter coffee, creamy-but-not-too-sweet cheese and just a hint of sugar crunch, it was perfectly juxtaposed with the dry fortified wine.

The lack of soft furnishings does make the bar a little on the noisy side, so not first date territory, although this is the ideal place for sharing a bottle of wine and some nibbles after work.

Veeno is a place to while away an hour or two feeling sophisticated and pretending you are on the Amalfi Coast instead of Manchester city centre opposite Gregg’s, until you realise that you’ve just shovelled down your third plate of the fruit-sweet Parma ham.