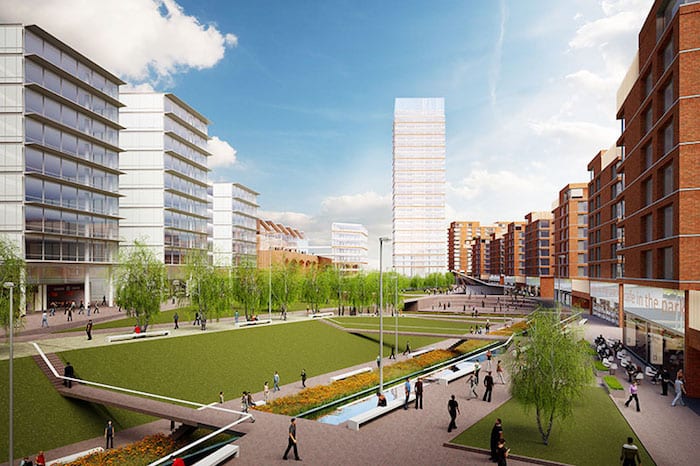 From neglect and dereliction to one of the coolest places to live in the UK. That’s been the astonishingly successful Ancoats story.

And the remarkable transformation is set to be replicated in the next ten years less than half-a-mile away.

Mayfield is separated from Ancoats only by the elevated railway tracks on the approach to Manchester Piccadilly station.

There are many parallels between the two neighbourhoods, not least the industrial heritage once regarded as massive problems but now seen as valuable assets earmarked to become centrepieces of the new development.

Ancoats has its pioneering mills; Mayfield has its former station, a cavernous goods depot and imposing red brick railway arches.

The £850 million Mayfield regeneration project – seen as “a once in a lifetime opportunity” – incorporates more than 30 acres and promises to lay out the first new city park for many decades.

The results have been incorporated into an updated version of the area’s so-called strategic regeneration framework and formally adopted by Manchester City Council. It is now the key document to be used when deciding on future planning applications, which will be brought forward as development goes ahead.

Plans are gradually evolving and include around 1,500 new homes and 155,000 sq m of new office space, hotels, retail and leisure facilities and a new 6.5 acre city park.

A spokesman for the partnership said: “Exactly what we’re going to build and how it’s all going to look is up for discussion and will be shaped by scores of different conversations we’re having with the people of Manchester. Mayfield is a once in a lifetime opportunity and we’re determined to make it a neighbourhood that’s loved by the people who live, work and visit the area.

“Mayfield’s industrial heritage is one of its greatest assets and the site’s history will guide our approach to its future. The former Mayfield station, the depot and the imposing redbrick railway arches will remain centre stage, but we’ll be using them in new and imaginative ways.

“A new public park by the River Medlock will also provide a new safe, green place in the heart of the city. It will provide the perfect environment for local people to relax, chat and take a time out.”

During the consultation much of the focus centred on the park and how it would be managed. Developers are pledged to design the park – which follows the course of the River Medlock – “to be welcoming to everybody whether that be to walk their dog, kick a ball around or to sit back and relax.”

It will be actively managed in a non-intrusive way – there won’t be security guards on the gates but there will be people on hand to remove litter and to challenge any anti-social activity.

The park will be funded through the development and the intention is to complete significant parts of the park in the first phase of the project.

Many people had also asked about types and availability of housing. In response the partnership stated: “We have a long-held view that we want to see a mix of housing types within Mayfield and plans set no limits on the diversity of the housing stock.”

The consultation revealed universal support for the retention of both Mayfield station and the Mayfield depot with its railway arches and the developers stressed: “We are very much looking forward to bringing them back into regular use.”

Mayfield station was built in 1910 to revive overcrowding at Piccadilly (then called London Road) station, but closed to passengers in 1960 and for goods in 1986.

Ten years later, television producers thought its dereliction made a perfect location to film the violent denouement of The Street, an episode of Prime Suspect starring Helen Mirren. The historic Star and Garter in Fairfield Street, one of Manchester’s best loved music venues, is also likely to be retained, but in what guise remains unclear.

In total, the scheme will create more than 7,500 office, retail, leisure and construction jobs and will reshape and extend the city south from Piccadilly station and act as a catalyst for the regeneration of the wider Piccadilly area.

The updated plan also reveals the developers’ intention to “bookend” the site with six tall buildings which could, with agreement, soar 40 or 50 storeys high – “among the most impressive in the city”.