Twilight in Salford: arts festival celebrates the magic of the city with a weekend of events 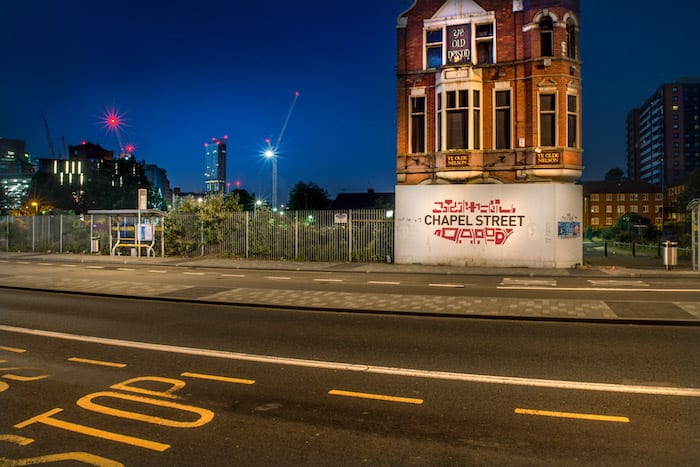 The Not Quite Light festival returns at the end of the month for a programme of 30 events which focus on cities, regeneration, art, music and performance at 12 venues and locations across Salford.

With newly commissioned work by artists, musicians, historians and filmmakers alongside walks, tours, talks and workshops, the festival focuses on Salford as a place of change and regeneration and asks how our cities are changing, from a range of perspectives.

The weekend includes a walk to record sounds at dusk, a film screening projected on the back of a sofa, walks along the River Irwell, an opportunity for children to dream the city of the future and a question on how the way we light our cities is affecting our daily lives.

Not Quite Light started as a photography project in January 2015 when festival curator Simon Buckley was living in the Northern Quarter and used to go out with his flatmate to walk his dog around Angel Meadow and the surrounding streets in the early hours of the morning.

Simon may have moved to Salford but he’s still up at the crack of dawn.

“It’s so magical, a time of possibility and beauty,” says Simon. “I often feel as if I’ve stepped through the back of a wardrobe, and I never tire of seeing the new day emerge from the darkness.”

Taking place on the weekend the clocks go forward, the festival uses the twilight hours as moments of inspiration for reflection and ideas.

“It allows us to reflect and to consider where we are in our world, and what we want from the city in which we live,” says Simon.

“The artists and performers that I’ve brought together are there, as always, to provide us with inspiration, to begin a conversation. The reason I do this is because of the magic that happens in the half light..”

Beneath These Tarmac Cracks

The world premiere of a play specially commissioned for NQL 2019 with music written by Bruntwood Prize finalist, Joshua Val Martin and sound artist, Daniel Mawson. Beneath These Tarmac Cracks tells the story of a Salford woman, born in 1913, who has developed a regenerative neurological disease that makes her vividly remember every second of her life. Are there some things better left forgotten? Friday 29th March, 7.30pm, Five Four Studios, £12.50

The NQL 2019 festival gets off to an amazing start, with a night of music, light and sound performed by artists exploring our haunted city of unresolved pasts and unrealised futures. It’s a unique event that will stay with you for a long time, as it plays with your mind and senses. Hauntology will feature artists Wilderness Hymnal, Black Lodge, Sean Clarke, Xavier Velastin, Zirkus, Ruby Tingle and Simon Woolham. To end the night, the excellent LoneLady will be performing a DJ set. In association with HAUNT Manchester at Manchester Metropolitan University. Thursday 28th March, 8pm, The White Hotel, £6.50

This night walk led by author and academic Nick Dunn will ask “What is a border?”. What happens when the identity of places become smudged? By exploring the two cities of Salford and Manchester at night we can experience how time becomes elastic and the nature of space changes. Friday 29th March, 10pm – 11.55 pm, Greengate Square, £8

Dave Haslam and The Option (Paris) perform their ambient soundscape Breathless live for the first time in the UK accompanied by a video created by Donna Jevens and sets by spoken word performers Eve Piper, Karl Hildebrandt, and Kieren King, and acoustic singer/songwriter Evie Russell. Using Dave Haslam’s heartbeat, together with found sounds, disembodied voices, and effects and weirdness galore, it’s an intense and overwhelming experience.The night concludes with Salfrica, a one-off club night of Afro-flavoured house and disco with DJs Levi Love and Selina Nongaliphe Oliphant (aka SNO). Saturday 30th March, 7.30pm until late, Five Four Studios, £9 (£5 for after party only)

The Dark City will see a panel discussion and performances from poets and authors Kate Feld, Emily Oldfield, Nick Royle, Rosie Garland, Steve Marland and Anne Beswick. They will explore the darker side of the city as an inspiration for crime novels, the gothic and film noir. Saturday 30th March, 2pm – 4pm, Five Four Studio, £6

This will be a fascinating talk by experts from Arup and a leading Manchester architecture practice on how we use artificial light. Light plays a vital role in our lives, affecting how behave and feel. They’ll be discussing how a human centred approach to urban lighting can create a truly 24hr city. Saturday 30th March, 11am – 1pm, Five Four Studios, £6

Salford underwent extraordinary change during the Industrial Revolution, and the Victorians built a new city. Historian John Garrard will discuss the social and economic factors that inspired the architecture of the Victorian era, and that ultimately has led to its demise as a fresh city is built in the 21st Century. Urban explorer Matt Holmes enters abandoned buildings and records the decay of these once grand structures, often at great risk. Sunday 31st March, 2pm – 4pm, Five Four Studios, £6