Trackwork construction on the long-awaited Metrolink line to the Trafford Centre is all but complete, paving the way for trams to start using the route in the first half of 2020.

This week saw the final concrete pouring of the £350 million project on a 15 metre stretch of track close to the ITV Studios on Trafford Wharf, on the south bank of the Manchester Ship Canal opposite MediaCityUK.

Now, transport bosses will start the process of testing trams on the tracks at low speeds on the 5.5km stretch to the six new intu Trafford Centre stops over the next couple of months.

They have yet to confirm the exact date that trams will start to take passengers, but say it will be “early 2020”.

The final pouring took the total volume of concrete used in construction of the link to 21,100 cubic metres – enough to fill EIGHT Olympic-sized swimming pools.

Last Sunday (3rd November), traffic restrictions on busy Trafford Wharf, which runs between Manchester United’s Old Trafford stadium and Imperial War Museum North, were lifted, returning the road to two-way traffic for the first time in two and a half years.

The road was made one-way eastbound on 19th June 2017 to allow utility and construction work to take place. Village Way, one of the key roads through the heart of Trafford Park industrial estate is expected to revert to two-way operation within the next week.

Transport for Greater Manchester committee chair, Councillor Mark Aldred, said: “This really is an exciting week for the Trafford Park line with the final pieces of the construction jigsaw put in place, paving the way for tram testing along the line.

“And the return of a major local road to two-way operation will provide a boost to motorists and I’d like to thank them for their patience during the essential one-way restrictions.

“Once open, the Trafford Park line will enable much improved access to Europe’s largest industrial estate and some of the region’s biggest visitor attractions.”

Councillor Andrew Western, Leader of Trafford council, said: “The scheme is hugely important for Trafford Park and the areas around intu Trafford Centre, both of which are essential to Trafford’s economy; not only do they provide thousands of jobs, they also attract a significant number of visitors while also delivering continued growth, regeneration and investment.”

During construction, the 4.5km of highways that run alongside the tram track have been improved or renewed and an additional 4.2km of cycling lanes have been provided, doubling the existing provision.

Construction of the new 5.5km line, which will serve Europe’s biggest trading estate – home to more than 1,300 businesses employing more than 35,000 people – as well as one of the biggest shopping centres in the UK, began in late 2016. 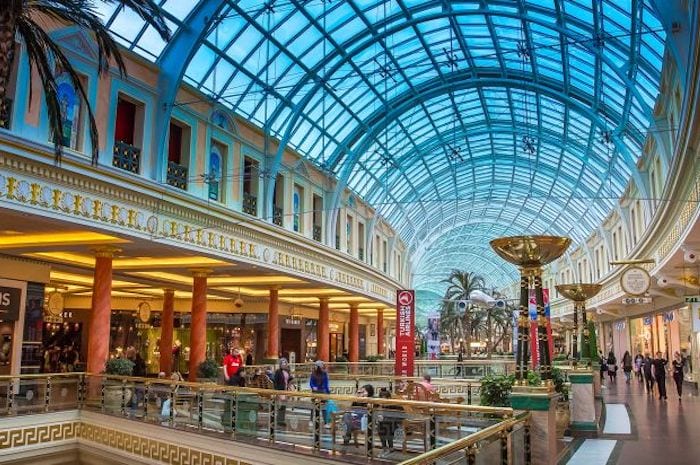 The new line will run from the existing Pomona Metrolink stop, through Trafford Park, terminating at intu Trafford Centre with six new stops.

The Trafford Park Line will run through zone 2 and zone 3, with Parkway tram stop located on the zone border.