Photographer Shirley Baker, who was born in Salford in 1932, was best known for her striking images of Manchester working class streets scenes in the 1960s and 70s.

Manchester Art Gallery held one of the largest retrospectives of Shirley’s now iconic street photography to date in 2017. This week, the gallery will celebrate the publication of two new books featuring her work: Dog Show 1961-1978 and Without a Trace: Manchester and Salford in the 1960s.

This special event is part of Manchester Art Gallery’s monthly first Wednesdays late opening series, which offers a chance to browse the galleries after hours along with live music, food and drink.

The evening will start with a welcome address by senior curator Natasha Howes, followed by a performance and live electronic music by artist, dancer and musician, Renu.

Shirley’s daughter, Nan Levy, will also be selling a limited range of exclusive ‘lifetime photographs’ developed and printed by Shirley herself.

“Whole streets were disappearing and I hoped to capture some trace of everyday life of the people who lived there,” she said. “I was particularly interested in the more mundane, even trivial, aspects of life that were not being recorded by anyone else.'”

The local documentary photographer, who died in 2014, also had an eye for the hobbies of post-war Britain. She first took her camera to the Manchester dog show in 1961, and returned several times in the following couple of decades. 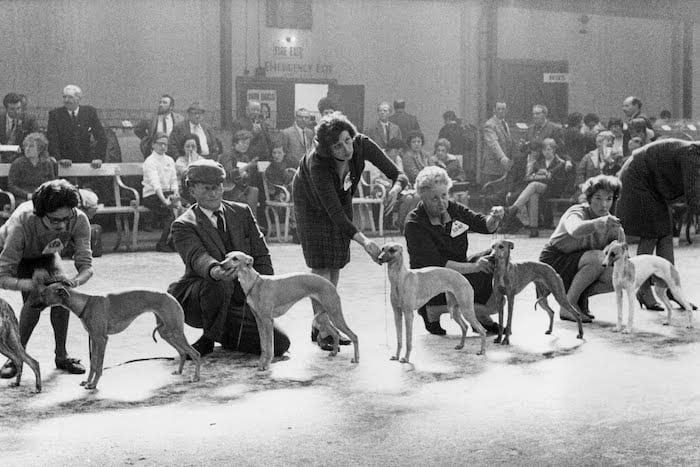 Dog Show 1961-1978 is book of images of British dogs and their equally groomed owners published by Hoxton Mini Press, featuring photographs of whippets, poodles, bloodhounds and dalmatians leading their owners into the show ring.

The images capture the tender, amusing and at times obsessive relationship between humans and their dogs. In some cases, the hairdos of the owners were more impressive than those of their groomed canines.

Manchester Art Gallery late-night opening and Shirley Baker book launch is on Wednesday 7th November 5-9pm. Tickets for the performance by Renu are free but booking is required.