The story of Manchester in 101 objects: #4 the Romans in Manchester 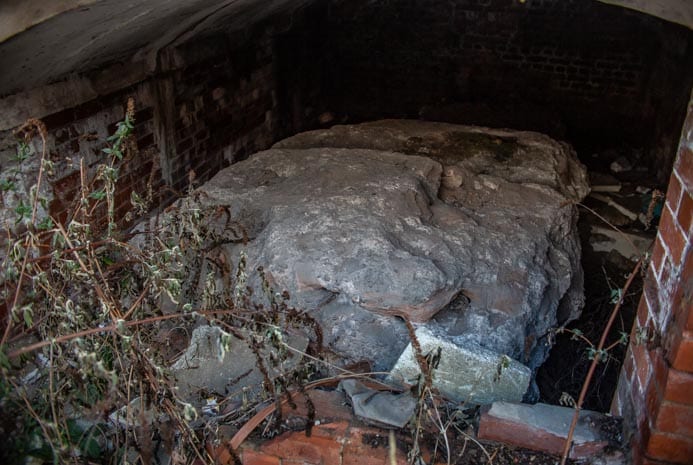 The Romans first came to Manchester in the year 79AD. Their settlement was not an important or large one, but it did lie at a crossroads of major routes leading from Chester to York and Ribchester (between Preston and Blackburn) to Buxton.

Three major forts were constructed over the centuries, with a civilian settlement alongside (to the east of where the Museum of Science and Industry now stands), before they left the area around the year 400.

One piece of authentic Roman masonry survives in its original position in Manchester. It is a block of stone, about a foot high and a few wide, dating from around the year 200. It can be found by turning left at the end of Collier Street under Arch 95 of the Manchester, South Junction and Altrincham Railway.

How it has survived is a miracle, as nothing else similar has, although the Earl of Ellesmere did urge workmen to save what they could when the railway lines were built in the mid-19th century.

The great historian A J P Taylor once described the relic as “the least interesting Roman remains in Britain”.

For decades the block was enclosed in land belonging to a timber firm. The owners would charge “10 bob (50p) to see the Roman wall”.

When they moved out in the 1980s, the site was locked up behind two sets of impenetrable barriers because the council was concerned people might damage it, might splice slivers away, like with the Berlin Wall, destroying it.

Now, a car park has been built on the site so it is accessible, although the block remains behind a sturdy metal fence.

One of the main differences between the Roman invaders and the indigenous population was that the former could write and left evidence. The latter, as far as we know, couldn’t.

A series of excavations carried out since 1970 before the construction of new roads or buildings have unearthed a few treasures.

On 12 April 2008, archaeology student Sarah Duffy found a well-preserved three feet high altar stone by the junction of Great Jackson Street and Chester Road – the location, ironically, where the newest, tallest tower blocks in Manchester’s history are being built.

In full, the inscription on the altar reads:

To the mother goddesses, the Hananeftae and the Ollototae, Aelius Victor gladly, willingly and deservedly fulfilled his vow.

It was the first time in nearly 400 years that archaeologists were able to put a name to a local Roman solider.