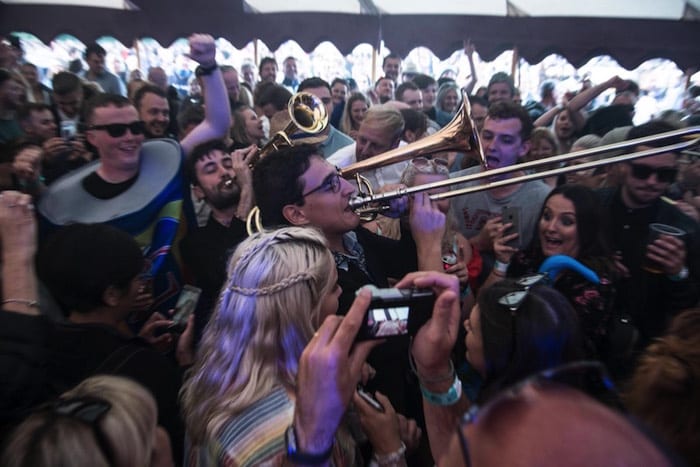 It took place one warm Saturday in August.

This year will be the same – if not bigger and better – with an exciting line-up spread over two days including big names like The Lightning Seeds, Toploader and Sister Sledge, as well as local musicians and small traders, with no big brands or expensive beers to be seen.

We spoke to festival director Rick Lees about the event, why it’s not like any other festival around, and about a beer dedicated to the festival.

Why did you decide to start the festival in the first place?

Me and my younger brother, Max, have played and worked at lots of festivals all over Europe over the last 10 years. We always thought Saddleworth would be an ideal location for a festival. It’s an amazing setting and isn’t too far from Manchester or Leeds. We had the contacts through playing at festivals previously and in 2016 we teamed up with a local entrepreneur, Luke Stanley, and were finally able to put the wheels in motion.

How are you feeling about this year’s festival?

We’re so excited for this year’s event. Our debut last year was quite a steep learning curve but, other than a few logistical issues, it went perfectly. As a result we were nominated for three awards at the UK Festival Awards, so we couldn’t have asked for more.

We’ve pushed the line-up to a whole new level this year. There’s the legendary Sister Sledge and also lots of fresh new acts like The Orielles who are destined for bigger things. We’ve tried to keep the line-up diverse to appeal to as wide a demographic as possible, whilst also introducing a number of hugely talented local acts that have caught our eye over the last 12 months.

How are you going to offer something for all the family?

Alongside the headliners, we’ll always look to bring some alternative artists to Cotton Clouds. We’re huge music fans and having been in the industry for many years we’ve seen some amazing performers. This year, we’re particularly excited about having Chali 2na from Jurassic 5 and Krafty Kuts perform. Chali is a legend of hip hop and it’s mind-blowing that he’ll be performing in somewhere off the beaten track like Saddleworth. He’s not that well known locally but it’ll be one of the performances of the weekend. It’ll be nice to see so many people surprised at how good he is.

Last year we were nominated for Best Family Festival at the UK Festival Awards and we had over 400 kids attend. We’re expecting just as many, if not more to join us this year too. We’ve teamed up with Global Grooves, another local organisation, who are known mostly for the Mossley Light Festival. They’ll be providing drumming workshops and lantern making throughout the day for the kids. We feel it’s important to push the art element with the kids as well as the music. In the evening there’ll be a procession through the festival grounds of some giant illuminated sculptures, dancers and drummers. The idea is that kids will be joining in with the lanterns they’ll have made.

Why have you added a Friday line-up?

Ultimately, we’d love Cotton Clouds Festival to grow to become a full weekend event but we have to take it one step at a time. The Friday night event will be more like a concert- type show with just the main stage in operation. We’ve managed to get together a brilliant line-up for the Friday and it just adds to the what we already have in place for the Saturday.

Where did the idea come from to create a Cotton Clouds beer?

We were approached by Donkeystone Brewing Co who are based just up the road from our festival site. They’re a young and passionate new business, much like ourselves, and they’ve earned a great reputation locally. We thought it’d be great to engage with a local business and create our own ale which would be on sale throughout the year. They did an amazing job and so far we’ve sold over 12,000 pints.

What’s so special about the festival compared to others?

I think what sets us apart from other festivals is Cotton Clouds has a real organic feel. There’s no big company behind the event, just a handful of young and passionate individuals who simply love live music and want to create an amazing experience. It’s the same small team of people that book that line-up, build the website and do letter drops to the residents. We’re committed to supporting local artists whilst bringing household names to a very small village in the north west. The setting is second to none. Saddleworth is such a beautiful place – especially if it’s sunny.