Dogs that go to work: meet the shop dogs of Manchester

We’ve all been there. You’re browsing a shop and suddenly you spy a little ball of fur or a wagging tail in the corner of your eye. It can be an uplifting moment.

Shop dogs have been on the rise in recent years, as more business owners start to take their pets into work with them.

Not only do these furry pals offer comfort and support to their owners; but they also make the customers and staff happy too. It’s a win-win.

Get ready to coo – they’re all adorable. 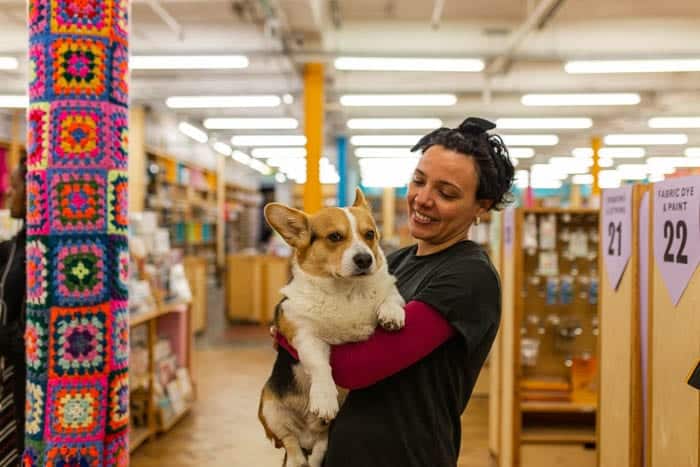 A family business, Fred Aldous has been operating in Manchester since 1886. Their shop  a loveable little Corgi called Morus is just 2 years old. One of a litter of six, he’s a full pedigree but he’s not got his papers. Not that owners Serena and Mark mind. “We don’t want him for those reasons anyway,” they say. 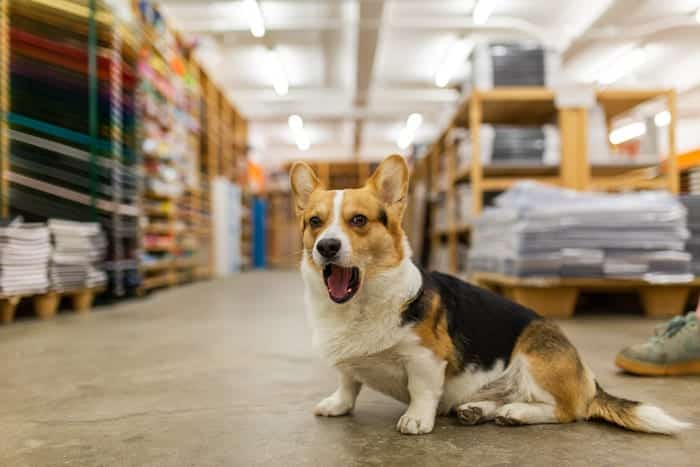 They’re both in the shop Monday to Thursday, and Morus comes into work with them in the week. At weekends he stays home with Serena, going on nice long walks and having a good play in the garden.

When he’s at work, he’s often behind the scenes with them, but he does like to go for a wander and pinch bits and pieces to play with when he gets the chance.

“He loves stealing the wool. We chase him up and down the aisles,” says Serena.

“He knows he’s not allowed to have it that’s why he doesn’t snatch it anymore but he used to just grab it and run. Occasionally he still does.”

She tells us the staff say he can make or break their day, depending on what kind of a mood he’s in in the morning. 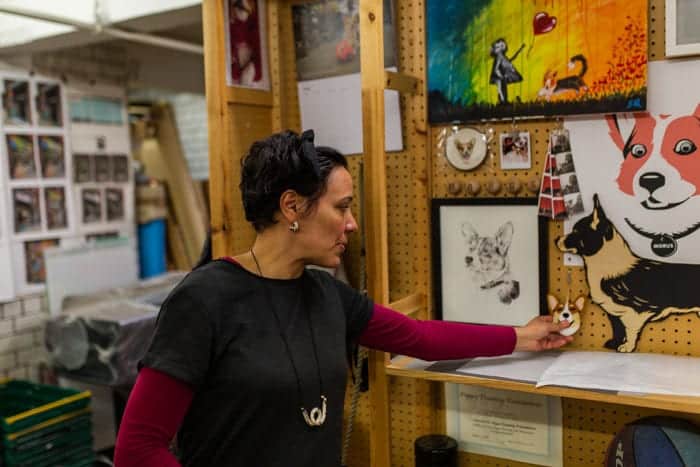 In the back is a little Morus shrine filled with pieces of Morus-inspired artwork and a Morus calendar – gifts from staff and customers alike.

Underneath, there’s many a deflated football and a big bag of polyester filling that he’s nicked off the shop floor. He loves a football, does Morus.

Porter and Cole at Porter + Cole 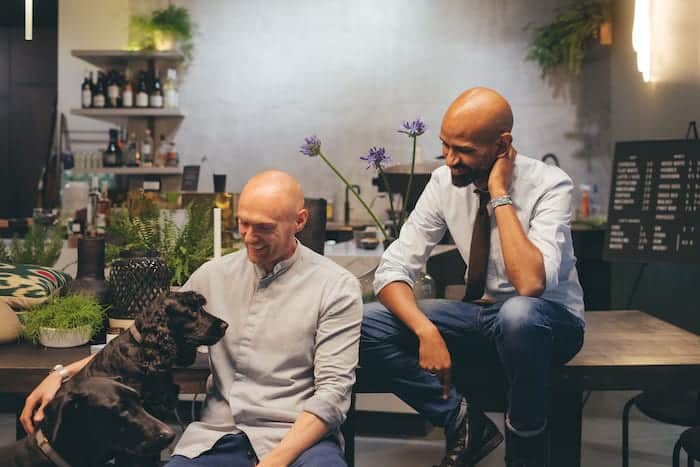 Porter & Cole owners Billee Williams and Ronnie Fearn love their dogs so much they named their Northern Quarter shop after them. It wasn’t intentional, Billee tells us, but it’s certainly been well received. They always have people coming in to say hello.

Weirmaraner-Doberman Porter and Cocker Spaniel Cole are pretty much permanent fixtures at the lifestyle cafe and can often be found nuzzling up to customers as they enjoy a wine or a coffee.

Cole came first followed by Porter, who they found at a rescue centre just as they were about to go on a family holiday. 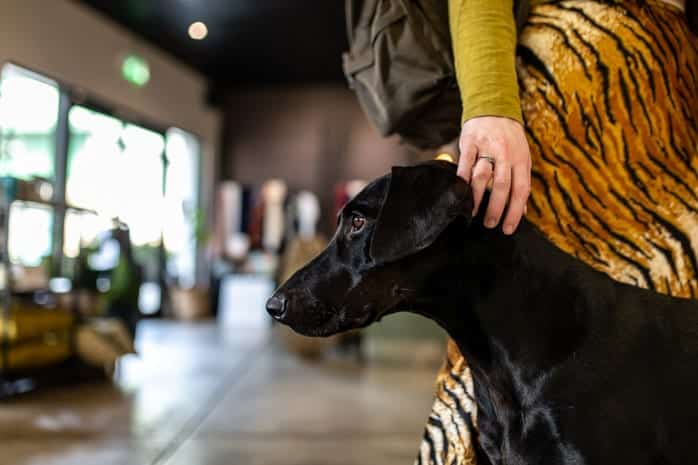 “We went thinking ‘Mmm there won’t be any dog that you like there’, but it was like a weird freak of nature moment. Our two favourite breeds are Weirmaraners and Dobermans and there was the only mixed dog in the kennels and it was our two favourite dogs so it was kind of hard.”

“I did say no quite a lot, but he came home with us,” Billee tells us.

“Cole is totally the boss” he continues, “really chilled, quite nonchalant with everyone, loves being fussed over but will quite easily move on to the next person to get more attention.” 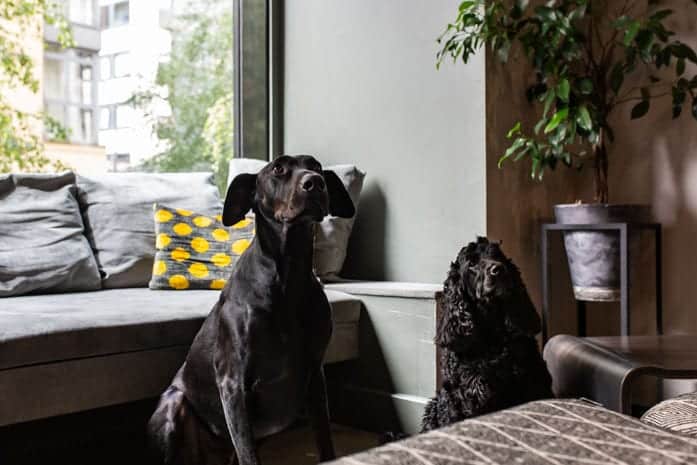 Porter, on the other hand, is a tad more high maintenance. He’s very loyal, but also can be a bit flighty. “He just doesn’t relax,” says Billee.

As well as the shop, the couple also have a design agency. Whilst that focuses more on domestic projects, their keen eye for design is evident everywhere. There’s a strong focus on being select and having ‘the right products’ here.

The beauty of the shop is that you can buy everything you see, so if you’re having a glass of wine and find yourself coveting the glass it’s in, they can ring it up on the till for you to take home. Perfection.

Bertie and Babs at Lanigan & Hulme 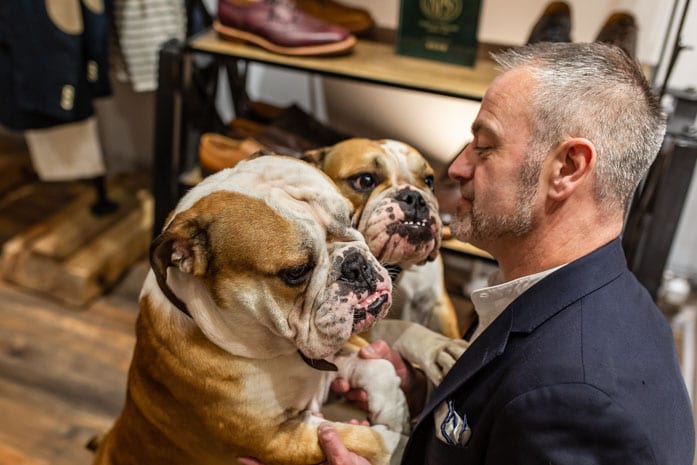 Tailor Phil Lanigan at upmarket menswear store Lanigan & Hulme brings his English bulldogs Bertie and Barbara into work with him every day. These two cheeky pups are just 18 months old and completely adorable.

Their favourite spot to sit in the shop is right in the door, looking out into The Royal Exchange Arcade, maybe chewing on a clothes hanger.

“Everyone always thinks I’ve trained them to do that, but it’s just a nice mat,” Phil tells us. “They have a following. We get a crowd of people outside the shop taking photographs. It’s like a zoo sometimes.” 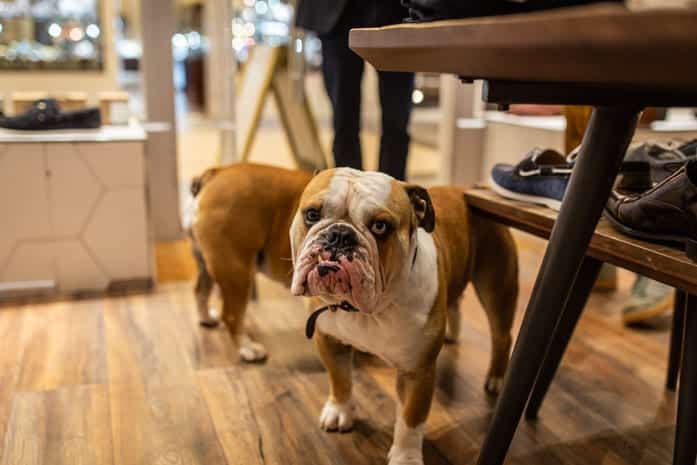 “We get a lot of people coming in that have got dogs as well. From their point of view, they love it because they can bring their dogs in with them – so, on some days in here, it’s like a dog creche.

“They normally sit either side of the mat. It’s funny because a lot of people think they’re porcelain.”

He tells us that they get loads of customers popping in to bring the dogs presents – and they’ll often pop in with leftovers to give them as a little treat too.

We don’t blame them. Who wouldn’t want to scootch up to these cuties? 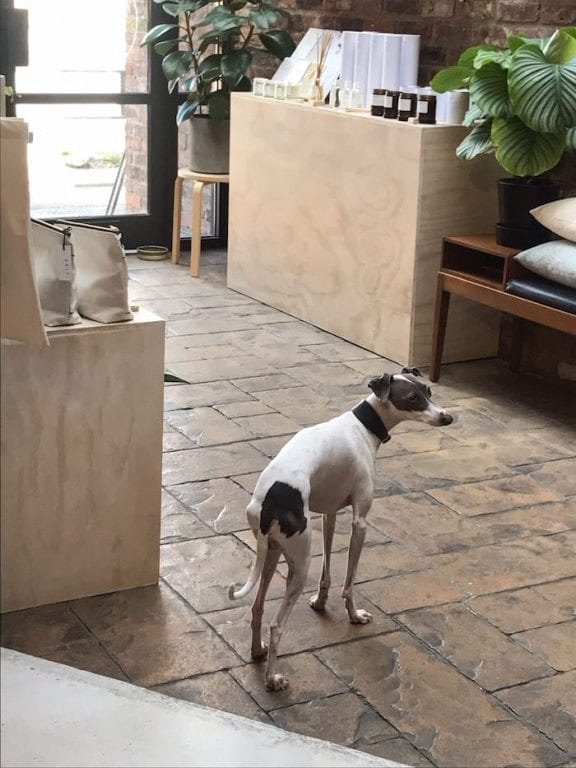 Italian greyhound Rudy is just as chic as Ellie and Harry’s shop. It’s a beautiful oasis of calm tucked away in the back streets of the Northern Quarter. which sells some stunning handmade items from makers both local to Manchester and further afield.

Rudy’s favourite place to be is curled up in co-owner Harry’s lap or, failing that, snuggled up in his bed.

An expert at navigating the beautiful spiral staircase that sits in the middle of the store, he’s mastered where to place his tiny paws so that he doesn’t fall through the gaps 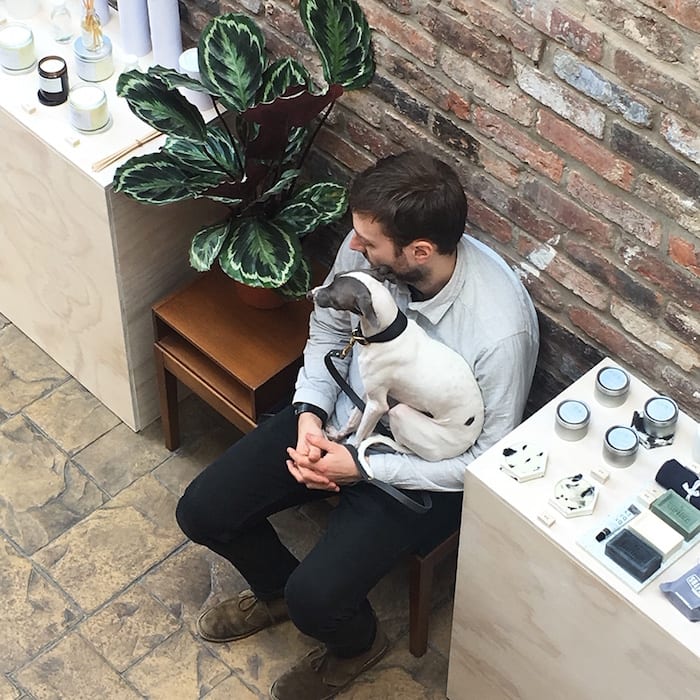 Ellie and Harry also host regular workshops with their makers and other local creatives in their upstairs and downstairs spaces – covering everything from terrarium making to screen printing and even dumpling making.