Manchester’s latest private members’ club The Milton enjoyed a resounding seal of approval from the city’s movers and shakers at its media launch party last Thursday. The Deansgate bar and club was packed to its 250 capacity with everyone happily soaking up the sophisticated atmosphere (and complimentary bar!) into the night.

“IT’S CLEAR MANCHESTER IS READY FOR THE MILTON – WE OFFER SOMEWHERE FRIENDLY, SMART AND ELEGANT TO MEET AND RELAX.”

As launch parties go, this was a classy affair and the guest list very much celebrated Manchester’s growing reputation as the media capital of the UK. From broadcaster and former top basketball player John Amaechi OBE, to the talented teams from the BBC, Gaydio and ITV to name a few, The Milton Club played a perfect host to some of the most influential media and business figures in Manchester. 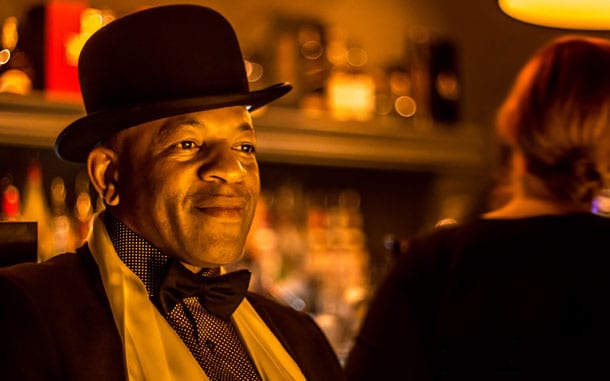 Sales and Marketing manager Joanne Barlow told us: “We’ve been blown away with the amazing feedback and compliments from everyone who came down to the launch. It’s clear Manchester is ready for The Milton – we offer somewhere friendly, smart and elegant to meet and relax, with a real emphasis on service and quality.

“.AN ATMOSPHERE THAT APPEALS TO A MORE PROFESSIONAL CROWD – PEOPLE WHO APPRECIATE A REALLY GOOD GLASS OF WINE OR A WELL-MADE COCKTAIL.”

“We’re an over-25s only venue too which our members really welcome. It means we offer an atmosphere that appeals to a more professional crowd – people who appreciate a really good glass of wine or a well-made cocktail. We’ve a great team here too – all the staff uphold the club’s emphasis on courtesy and friendliness which is a key element to what we have to offer.” 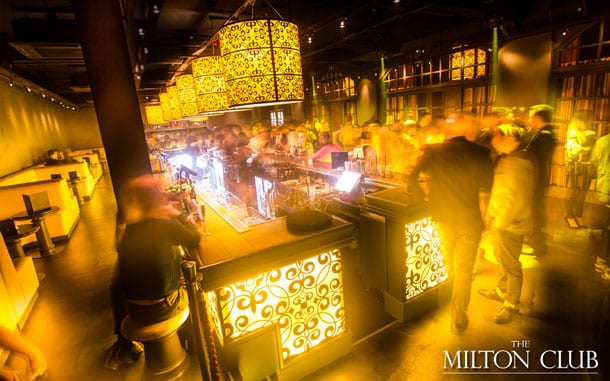 Inside, the Milton Club’s central feature is an impressive 25 (check) foot long bar which offers a fabulous menu of both classic drinks as well as rare spirits and wines. There’s also a dedicated champagne and cocktail bar as you enter, where French cocktail maestro Al and his colleagues will rustle you up possibly the best espresso martini in town. Al was a very popular man on Thursday! 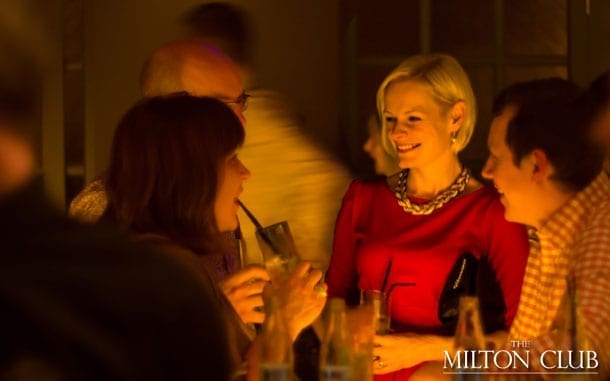 The amber and charcoal grey colour scheme at the Milton was created by top interior designer Bernard Carroll and really adds to the warm, sexy vibe.  For those who like a little extra privacy or somewhere to party in style, there are cosy booths too which can be booked in advance on busy nights. One of these is so swanky it has its very own private bar!

Membership is free which is good news. You simply sign up online at www.themiltonclub.com and once you do, you get all manner of perks, discounts and incentives. You’ll also be added to the mailing list for parties, events and launches. 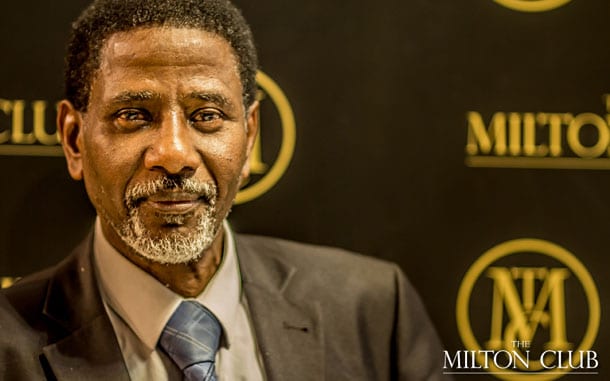 The club is available for private functions, launches and meetings daytime and evening in the week but is pleased to have been issued with a late (4am) licence at weekends. Looks like this could be the place to be for those wanting to escape the rowdy club scene or to chill before or after a swanky dinner.

“.TRIBUTE TO THE POET AND FREE-THINKER JOHN MILTON. HE’S THE MAN WHO WROTE THE FAMOUS POEM PARADISE LOST.”

So where is it? Well, the club is located to the rear of Milton Hall on Deansgate, opposite the Great Northern. It’s an intriguing place – the hall was built originally as a church and later became Milton Hall in tribute to the poet and free-thinker John Milton. He’s the man who wrote the famous poem Paradise Lost. Well Manchester, it looks like it’s Paradise Found now that we have The Milton Club to enjoy.