Think I’ll go to The Laundrette. Not any old laundrette... 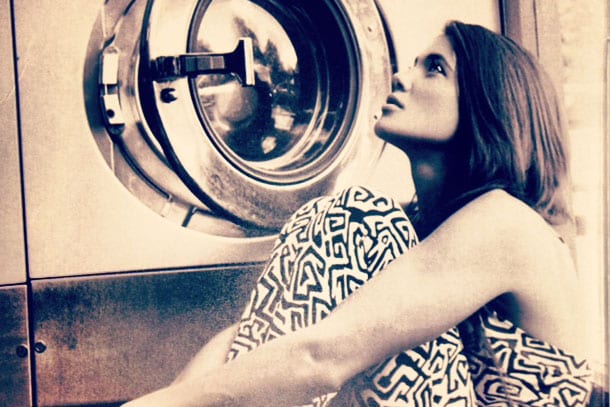 Owners Jon Charles and Patrick Hall – who also own The Chorlton Green Brasserie down the road – have kept the laundrette theme going not just in the name. Open the door and there’s half a dozen washing machines and a couple of tumble dryers. Only kidding.  There are a dozen or so tables and a nice cosy atmosphere. Exposed floorboards and brick and reclaimed tables and chairs. It’s nice. And it’s busy, too, considering it’s a wet Monday evening. A good sign. 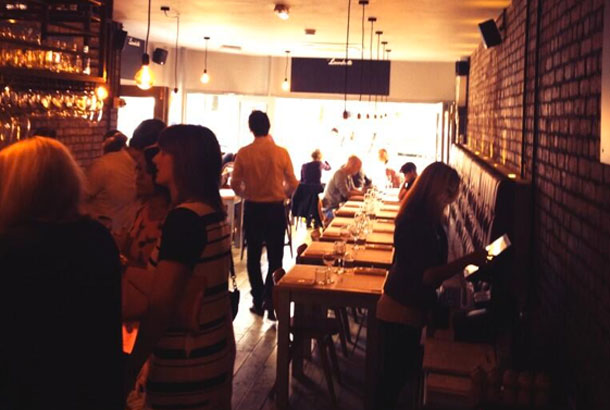 The theme does, however, extend to the name (obviously) and the menus which are beautiful and witty. But enough about the menus. It’s the food that counts. So here we go.

The waitress took our orders on an iPad Mini so we didn’t have to wait long for our food to be served (order goes instantly to the kitchen so food was being cooked even whilst taking the rest of our order). For starters (or ‘prewash’ as they are described on the menu) we had calamari (£6), Laundrette ribs (£6.50), and garlic dough balls with rocket and padano (£3.50). We weren’t being greedy. There were three of us. All of the starters were yummy and hit the spot. Oh and the bread was lovely and locally sourced, like a lot of the other produce they use.

“My ginger companion described his porky pizza topping as “something special, sexy, wonderful.”

House specialities are “sexy” pizzas but there are other dishes to choose from such as fish pie and pasta. We chose the pizza. The toppings are rather unusual. How about cod cheeks, smoked salmon flakes and wakame or Frosty’s smoked ham, Bury black pudding and spicy sausage (all under £10). 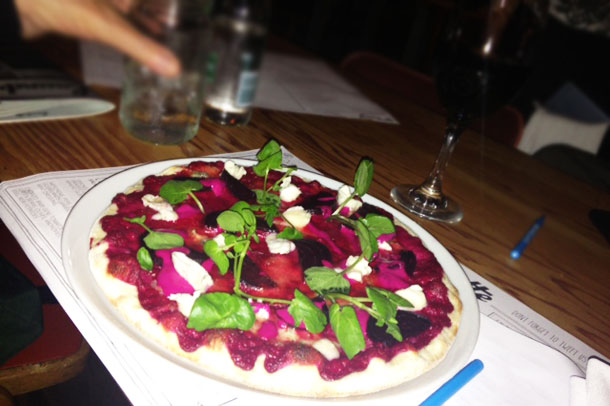 I chose gorgonzola, beetroot cream and watercress (I know) (£7.50) and my companions went for slow roasted pork, tomato, baked egg, pineapple chutney (£10) and the Frosty’s (by the way, there are no breakfast cereals involved. Frosty is the local butcher and another local supplier). My non-ginger companion isn’t a fan of Bury black pudding (strange but true) so they very kindly replaced it with some cheese which was a nice touch.

“For dessert we were tempted by a dessert pizza …salted caramel, nutella, banana and vanilla ice cream…”

The concensus on the pizzas was that the pizza bases were disappointing but that the toppings were lovely. My ginger companion described his porky pizza topping as “something special, sexy, wonderful.”

For dessert we were tempted by a dessert pizza (salted caramel, nutella, banana and vanilla ice cream) (£6) but went for a warm chocolate brownie with whipped white chocolate cream (£5) and knickerbocker glories – a perfect dessert for a place called The Laundrette (£5). They were delicious. 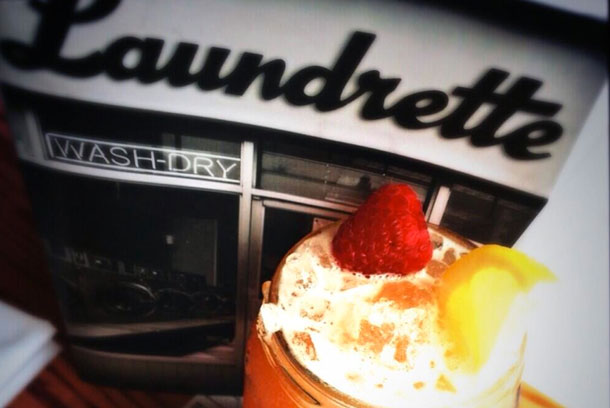 There is a comprehensive list of quirky cocktails to choose from. Ginger finished with a Tipsy Fish, a cocktail version of the goldfish in a bag which used to be a prize at fairs – gin, mandarin vodka, rhubarb bitters, tonic with a goldfish made from orange peel served in a plastic bag just like the real thing. I am pleased to report that it tasted much better than the real thing and that the orange peel fish lasted longer than a real goldfish.

The Laundrette is open from 10am till 11pm and is a nice, comfortable quirky place to hang out, with an informal atmosphere, moody lighting and lots of outside seating for when it’s a nice day. It’s also family friendly and kids can make their own pizzas.

Was it worth the trip to Chorlton on a wet Monday evening?  Yes it was. Would we go again? Yes we would.