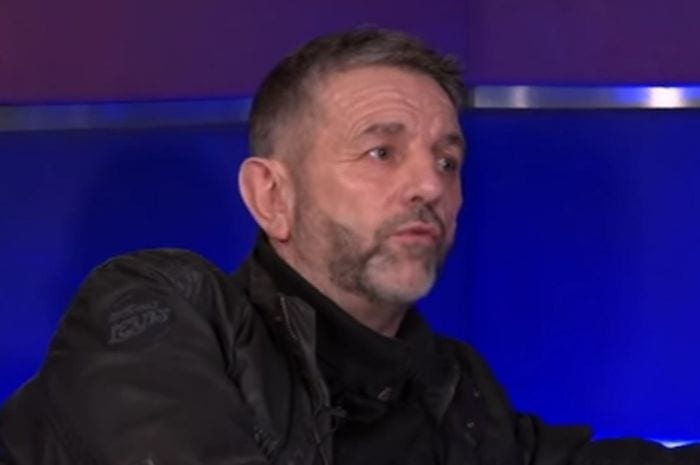 I was warned that The Evolution of Manc: An Evening with Steve ‘The Adj’ Atherton and John Robb would be ‘the shaggiest of shaggy dog stories.’

Musician and writer John and former tour manager of The Stone Roses Steve talked about everything from the co-founding of the School of Sound Recording Studios to the first ever warehouse parties in the city, not to mention The Stone Roses’ tour antics, the destruction of a hot air balloon installation in a Japanese hotel, and being covered in paint on a housing estate for a music video.

Steve has some stories to tell. He’s worked with many bands including The Coral and The Courteeners, but is probably best known for being tour manager and roadie for the Roses.

“I’m a townie, always have been,” Steve declared proudly. “Gorton born and bred – from a two up, two down.”

Now aged 59, he described growing up in the 1960s and 1970s when Manchester was “in a total state of flux.”  It was a time when 14-year-old kids would travel into town by bus and consider it an achievement if they weren’t beaten up by one gang or another.

He reminisced about the Manchester music scene. “There should be blue plaques all over the city,” said Steve, referring to the music legends who have lived and worked here.

Spirit Studios at 10 Tariff Street became a place of legends, working with local bands who went onto be big including James, The Happy Mondays and The Membranes (of whom John  is lead singer).

This was where Steve worked as a young man and where he became exposed to The Stone Roses. “In them I heard what at excited me,” he said, describing their “ecstatic energy” and “pure anger.”

The band formed in 1983 and Steve helped out behind the scenes as he was a bit older and could drive. He described touring with the band – a famous fight in Preston, trips abroad (pun definitely intended) and the birth of warehouse parties.

Steve was one of people involved in kick-starting warehouse party culture.  The story is far from conventional.  Steve and a colleague from Blackmail Records decided to take their inspiration from northern soul nights and contacted British Rail to hire a railway arch on Fairfield Street.

To promote the first ever (illegal) event, they placed an advert for ‘The Flower Show’ in the gardening section of the Manchester Evening News. Did it go to plan?

“I was bricking it,” Steve admitted, as he had to consider things like public liability insurance.  But it was worth it for the experience.  “A proper attack on the senses. Amazing sound.” It created a whole movement in 80s music and what is now rave culture, and was still ‘top’ even though it didn’t make any money.

By 1989 The Stone Roses were starting to have a big impact. Mani had joined by this time and Steve remembered having a gut feeling.  “It was inevitable that these are going on Top of The Pops.”

“Manchester had it all then,” he reflected. 1989 was year the The Stone Roses’ debut album was released and when bands like The Happy Mondays, New Order and 808 State were also having an impact. “This is what Mancs do – we hit the ground running.”

An Evening with Steve and John, part of the Greater Manchester Fringe Festival, lasted for more than two fascinating and hilarious hours. It included insights into the Fools Gold music video and a Stone Roses trip to a Finnish festival and was  served up with plenty of Mancunian charm.

You will be able to find out more for yourself when Steve’s book The Evolution of Manc is published.  It’s set to be the definitive inside account of The Stone Roses – as John, himself the author of a best-selling book about the Roses, agrees.

The event closed with a Q&A from the audience and a resounding message that in order to make a musical impact you’ve got to “get out on a limb…that’s where you find the fruit.”

It ended  with a warning to the youth of today. “There’s no movement in Manchester right now… we need young people to drive fashion, to drive music.”

It was a memorable night.  I just hope that Steve’s advice is taken. Fantastic!