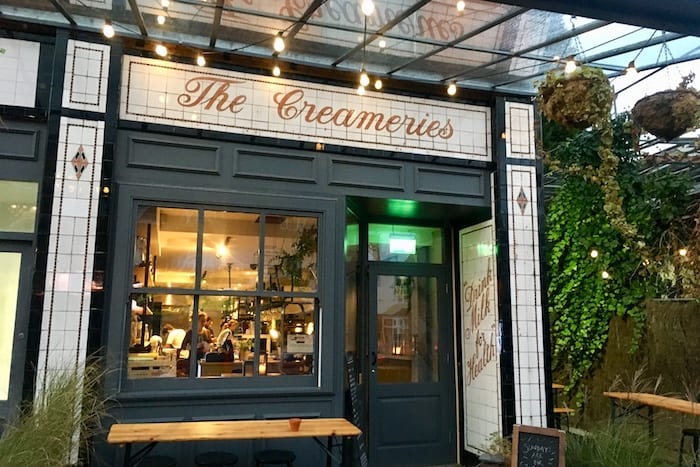 Chorlton is a foodie’s heaven, a neighbourhood full of independent retailers and restaurants.

Amongst them, The Creameries stands at the top of many people’s lists as one of the best experiences you could ask for.

As we transition into the Christmas season, their latest festive menu meets and exceeds expectations. Curated wine pairings to delightfully plated dishes are a welcome change from the usual overwhelming servings of Christmas classics.

The prelude to the winter creations is a bright sparkling French wine, Cremant D’Loire Brut.

Each glass holds all the crisp, fruitiness you’d expect from a quality Loire wine with a hint of creaminess.

To go with it are the appetisers of oysters, in-house pickles, gougere spheres, artichoke crisps and bread and butter. 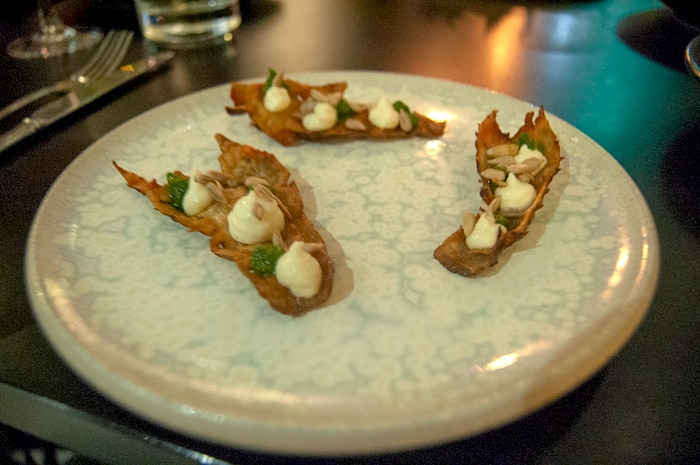 The oysters come with a comice pear garnish whose sweetness is elevated by the sparkling wine’s finish.

Of the pickles, The Creameries have chosen to bring out a selection featuring gooseberries, cauliflower kimchi, fennel and cinderwood carrots. A little different from the usual offerings and a fitting way to kick off a meal.

The plate of gougere balls are almost reminiscent of Christmas baubles, with a garnish that sparkles in the light. Sharp and salty, they awaken tastebuds in preparation for the courses to come.

Similarly, the artichoke crisp with creamy goat’s curd and a parsley sauce have the hint of sweetness to whet the palate.

The final starter to go with the Cremant D’Loire is the classic bread and butter. Swipes of the two different butters across fluffy sourdough, a whipped browned butter as well as a cultured butter, makes for a strong start to the meal. 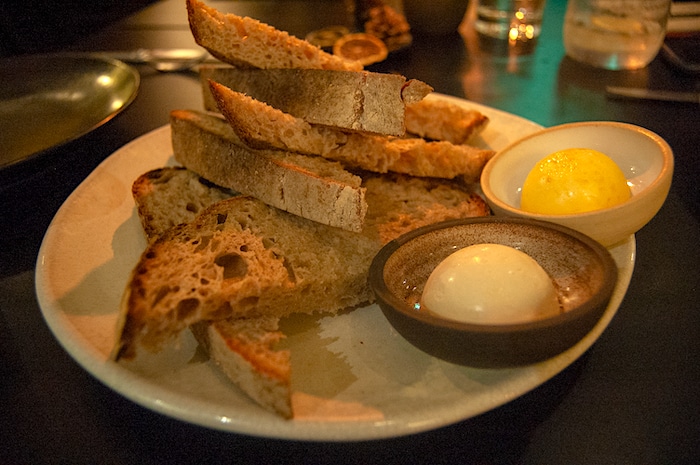 The arrival of red Nero d’Avola is the start of the main courses. With fruity notes on the nose, the wine’s carbonic maceration process gives the glass the scent of wild berries.

It is only fitting then that the first course to come with it is a salad of smoked pigeon ham dressed in a citrusy Cumberland vinaigrette.

The earthy flavours of the smoked pigeon have a wild sweetness to them which are highlighted with a sip of the Nero d’Avola. Almost like smoked salmon, the pigeon goes down easily as a tender treat.

Meanwhile the salad itself of beetroot, walnuts and radicchio works to give the dish an extra dimension of texture, alternating between the pigeon’s softness and the crispness of fresh salad. 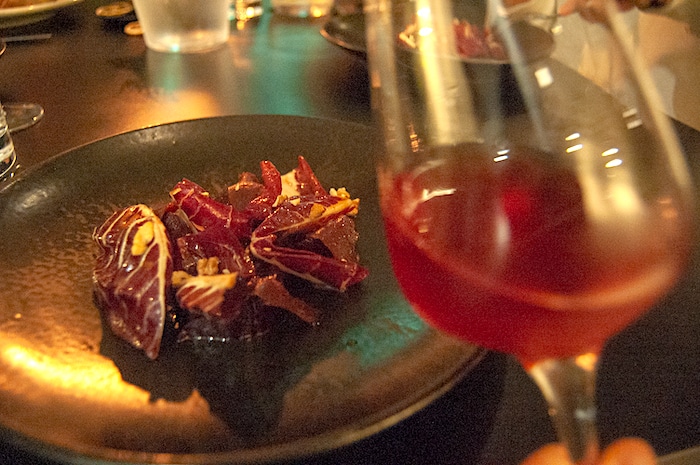 Next comes a bowl with simple confit egg yolk in the centre. Over the glistening gem, a celeriac broth is poured.

The end result is an umami-filled dish, with fermented shiitake mushrooms as well as truffle and celery oil mixed in.

To complement it is “El Muelle De Olaso”, a sweet and vibrant wine from Spain. Soft and rich, the egg yolk is different from any curing you’d usually expect.

With the celeriac and wine’s sweetness, a spoonful of it has everything you’d want for setting the scene before the next course. 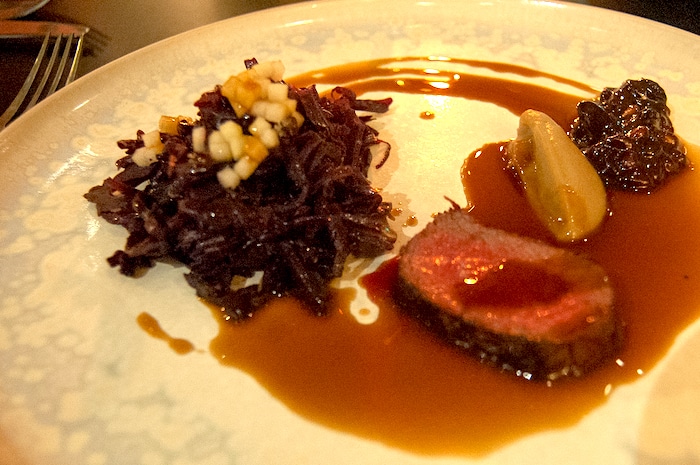 Seasonally, we have entered game season for meats. As such, it should come as no surprise that venison is on the festive menu.

What may come as a surprise is the delivery.

Done two ways, the meat’s gamey flavours are used to the maximum point.

Served with a Jerusalem artichoke puree, braised red cabbage and pommes anna it makes for a harmony of different flavours and textures. 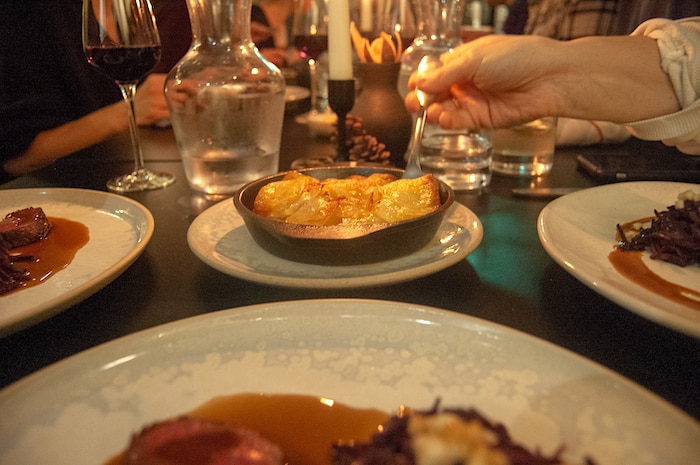 All of this is given a finish of royal sauce. This sauce is made from chocolate, pine nuts and currants and raisins that have been macerated in red wine. Even the sauce alone holds all the characteristics of a Christmas evening.

To put the proverbial star on top of this Christmas tree of a dish is the red barbera wine that has been put through the fukuoka method of low intervention fermentation.

Bold, juicy and acidic, it measures up to the strong flavours on the plate for a meal to be remembered.

Finishing off the menu is a selection of three different sweet treats.

Up first is a dense chestnut tart with quince and brandy sauce. Following the heaviness of the venison, the tart holds its own with each mouthful being a flavour-bomb. 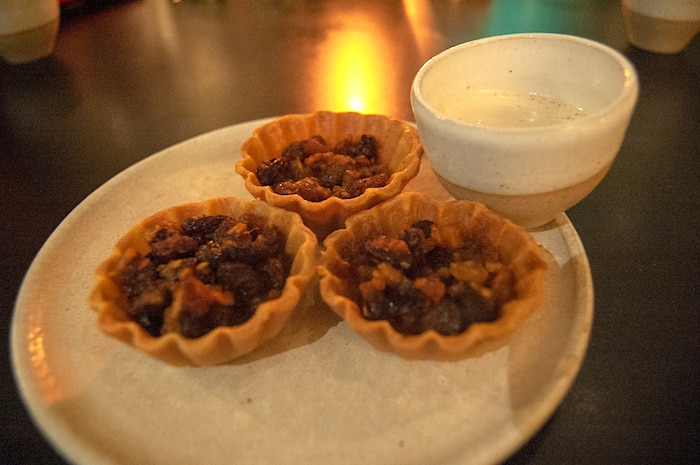 This is followed by The Creameries’ own mince pies with hot buttered rum. Something you could indulge in for hours next to a fire, it is a fitting way to end the festive menu.

Finally though are spheres of gold, frankincense and myrrh. Though not served by three wise men, they are certainly a special gift to get.

Tying all of them together is a luxurious dessert wine that will leave you wanting more even after it’s all gone.

Across all boards, the menu has been put together for plate after plate of Christmas cheer.

Get ready for a new type of Christmas dinner.