The Courteeners still have a place in Manchester’s heart 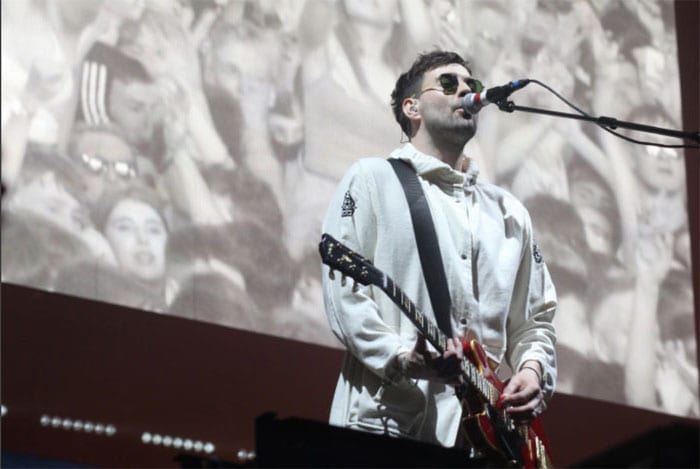 It’s hard to believe that ten years ago, a group of lads from Middleton (and the surrounding areas) created an album that would go down in musical history as one of the best debut albums of their generation.

St Jude was the album that changed everything for The Courteeners, although at the time the critics dismissed it, thinking that the band would never create the impact that they eventually did.

Playing venues like London’s Royal Albert Hall, Sheffield’s O2 Academy and Blackburn’s King George’s Hall may seem like a big deal for the band, but nothing compares to a home gig. Especially if your home city is Manchester.

The Courteeners brought their anniversary tour to the lucky 21,000 fans who managed to get tickets for the special Manchester Arena gig.

Even though they’ve played the Arena plenty of times before, there was still some kind of excitement that was never felt before.

This was the album that changed and inspired a generation to not give a flying you-know-what about what people think about you. The Courteeners created a buzz like no other. And that was way before the gig even started.

Support came from Brighton alt band YONAKA and Peace, who supported The Courteeners at their major Heaton Park gig.

The reason for a support band is usually to showcase new talent – YONAKA and Peace are certainly bands you should be listening to – and to warm up the audience. But this wasn’t needed.

If you walked through Manchester city centre you would know that The Courteeners were back in town because of the number of people chanting their tunes or dressed ready for a dance to their indie dance floor hits.

Manchester Arena’s stage has seen it all. Glitter, lights, even a lift. But tonight it is stripped back with only the St Jude album cover as the backdrop for the band. It’s all about the music for The Courteeners. Always has been and always will be.

Oasis’ Rock n Roll Star powers through the speakers of the Arena getting those old folks who are in the upper tiers bouncing about, joining the brave ones who are standing who have been bobbing along with excitement since the doors opened.

The music comes to an end and the boys walk on stage, giving the odd wave and smile.

Without any introduction, The Courteeners begin a gig that will never compare to any of their previous shows.

They open with Aftershow, the opening track from St Jude, followed by instant crowd pleaser, Cavorting, which woke up any members of the audience who had dozed off during the interval.

A few songs into the gig and technical difficulties occur. Frontman Liam Fray isn’t shy to comment on the difficulties. “Ten years and we still can’t get a working mic.”

But being in a band like The Courteeners, there’s no need to point out the problems because the crowd will be there to carry on the music when it stops.

After a few minutes of problems, the real music continues as the first section of the gig is dedicated purely in honour of St Jude.

The rest of the band get back on stage to finish what they started – a real party.

The last section of the gig brings tracks from across the band’s ten year history and creates a non-stop celebration for the band who have created so many memories for the thousands of fans in the building.

Fray dedicated Here Come the Young Men to his fellow band member and pal, Campbell, who smiles behind his drum kit.

The night ends as almost every one of The Courteeners gigs does – whether you saw them at Heaton Park, Old Trafford, Night & Day or Roadhouse – with Not Nineteen Forever followed by What Took You So Long?

Before ending the gig, Fray took some time out to thank the people for coming to the Arena after last year’s attack, and spoke of how brave and wonderful the people of Manchester are and how we stick together. One big family.

As the gig ended and people went on to after parties in the city, one thing was certain. The Courteeners have still got a place in Manchester’s heart. God bless the band.

To celebrate the 10th anniversary of St Jude, The Courteeners have released a re:wired version of that debut album, a celebratory tour and a beer. And a very good beer it is.

The re:wired version of their debut album St Jude is available to buy in music stores and online.

The band are also releasing St Jude for Record Store Day 2018 which will be limited edition and available to purchase from record stores on 21st April.

The Courteeners have also created a Camden Town Brewery lager in celebration of St Jude which is available at Crazy Pedro’s and Black Dog Ballroom.