The cast of Cold Feet on what we can expect in the new series, filmed in Manchester

Incredibly it’s over 20 years since Cold Feet first aired. There might have been a 13-year break but when the series returned in 2016, there was as much love for the Manchester-based show as there ever was. Even more, as older fans introduced it to a new generation.

Now Jenny, Adam, David, Karen and Pete are back for an eighth series, and it’s set to be particularly poignant as some unexpected news sends one of the characters into a tailspin.

Here, the cast talks about we can expect, as well as their enduring affection for a city they know so well.

The Cold Feet crew’s been filming in Manchester for so long that “no-where’s safe,” says Fay Ripley, 52, who plays Jenny. “There’s no restaurant we haven’t turned over, where I haven’t changed and been completely naked in the toilets,” she says.

“But it feels really small, so every corner has a memory. I don’t know anywhere as well as I know Manchester other than where I live.”

In this series, Jenny and husband Pete are content; she’s enjoying life as a mature student and then she’s dealt a devastating blow with a cancer scare in episode one.

“I’m definitely checking myself more because I think women my age, we get scared,” says Fay. “It’s really about getting the balance right between a bit of humour, a bit of real-life, fear.”

She believes the fact the five friends become even closer reflects real-life.

“The bottom line is at our age something happens where your family falls away, your parents get elderly, and children grow-up and leave home and who are you left with? It’s the new family you’ve accrued, your friends, and that’s the relatable thing.”

Adam’s never had any trouble charming the ladies but in this series he’s back on the singles’ market and women are looking a little sparse. Then an unfortunate situation arises with his son Matt that gives the ageing lothario an overdue wake-up call.

“It’s an eyeopener and I think he’s embarrassed and ashamed,” says James. “But I think it’s good for Adam to move on because I thought he’d lost some of likability in the last series. There’s only so far that thing of whether he’s going to grow-up can go.”

But the reality of ageing is relatable, “not just to me but to an awful lot of us,” says the 53-year-old.

“The same way our characters have gotten older, the people who watch it have got older, and there’s an awful lot to be said about what our place is in the world, whatever age we are. The challenge for any drama is to have a truth to it.”

He thinks the people of Manchester were “proud and delighted” to see the cast return in 2016 “but also not overly excited about it”.

“People are very used to us,” says the actor, who stays in Didsbury during filming. “They really do treat you like family and I think they’re good at keeping you grounded. When we look back at the albums of our memory later in life, Manchester will feature greatly.”

Cold Feet isn’t one of those jobs where you can just rock up and wing it.

“We all feel the weight of responsibility,” says Hermione, 51, who plays Karen. “You sign up to play a character 21 years ago and then you’re at the mercy of [the creator and writer] Mike Bullen, and whatever he chooses to do with you,” she says. “But we’re all pretty vocal and I do think he takes notice.”

After a tumultuous time in her love-life, including attention from a billionaire, her ex David and a toy boy, Karen’s now focusing on her career.

“Karen started out very conformist, married with children, and at that time I was single,” says Hermione. “My whole career’s been playing characters for a very long time and any character you play rubs off on you and you rub off on them unquestionably.”

She loves filming in Manchester. “There’s a strong sense of love and community, which you don’t get necessarily in London and being a part of Cold Feet, you really feel it.”

But then the drama has been around for two decades. “To provide entertainment and comfort in people’s homes is a real privilege,” she says. “I think it’s as much a mirror to the audience and their own lives as it is about the characters and whatever story they find themselves in.

“They’re all very flawed, and it’s about relationships, connectivity and life on life’s terms and I think people really identify with that and find it quite comforting.”

John’s character is no stranger to finding himself in tricky circumstances and this series is no different when Pete winds up launching himself into a canal to save someone’s life before administering CPR in a memorable manner.

“It’s grim with centuries of debris in there and full of silt so parts where your leg would go down in what feels like quicksand,” says John, 49, who’s from Manchester.

“But you forget this show’s an education as well. Off the back of Pete’s depression storyline, it was a massive awareness creator and I didn’t know that would be a knock-on effect. Two people said, ‘You’ve saved my life’. Never saw that coming.”

He’s “overjoyed” to be in a drama that people watch “in an ever-changing world of television,” he says.

“It’ll always be the thing we’re remembered for, but I don’t resent that because it’s quality and always maintained a good profile of maintaining quality.” And he doesn’t see why they can’t just keep going. “Problems are always there, they’re just different problems as you get older. It doesn’t get easier, it’s just different.”

The Cold Feet cast don’t receive many of scripts in advance and when they do arrive, “the ink is still wet sometimes but your fingers do tingle [with anticipation,”] says Robert, 61.

“You think, ‘Yeah, I can do something with this’. There’s the comedy and the drama and surprises and it’s really on form.”

Unlike David who might be in a relationship with divorcee Nikki (Siobhan Finneran) but he’s stumbling around. He’s working in a call centre “but still turning up in a three-piece suit,” says Robert. “That sense of displacement is new to him because he’s always been busy and to be displaced physically, financially and emotionally means he flails.”

It doesn’t help he still has feelings for his ex-wife. “The whole Karen, David thing underpins him emotionally, even though he has no claim, they’re divorced. It’s that yearning, that longing, maybe born of regret,” notes Robert.

“I love playing him because he does get it wrong all the time. But he’s also a survivor. He never gives up.” 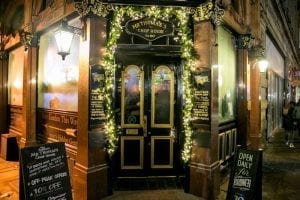 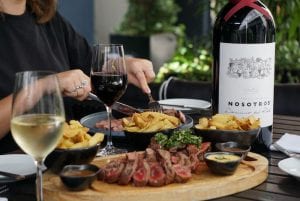 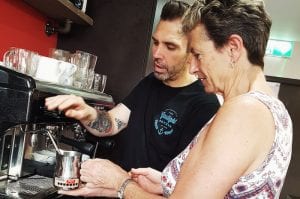