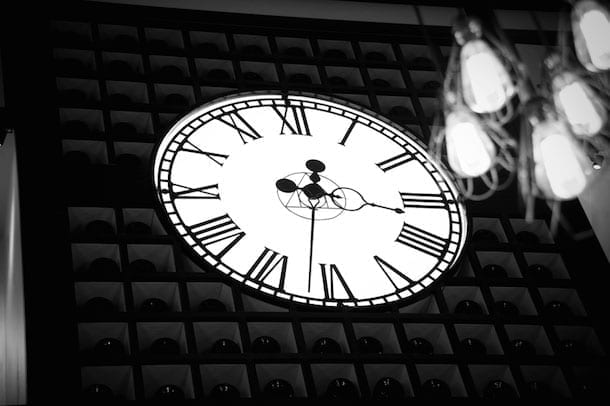 What with England losing 2-1 to Uruguay on Thursday night, we was quite happy to be going down to Spinningfields to catch up with the original Alchemist and sample some of the veterans cocktails and food instead. This is something we’ve not done for a while since its sister site opened on New York Street.

With temperatures at 22 degrees outside and the street quieter than usual, it was nice to see people relaxing after a hot day in the office in the outdoor area of the cocktail bar and restaurant. 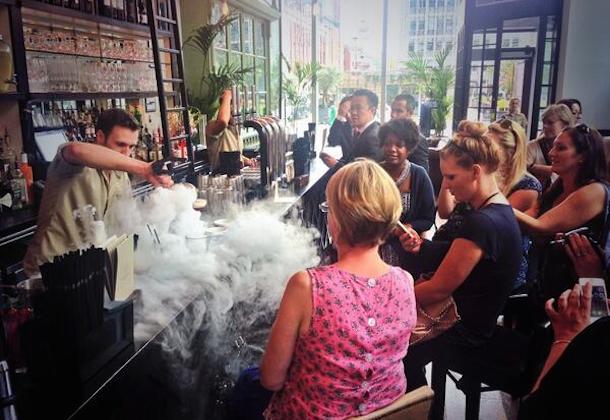 We waited casually to be seen by the waiting staff who, once acknowledging us, didn’t seem to be aware of our reservation – despite confirming a mere ninety minutes before. With a bit of a slow start, and whilst they laid and put our table together, we were seated and perused the vast and fantastic cocktail menu.

Written like something from a Roald Dahl novel – ‘The Colour Changing One’, ‘Flower Sour’, and ‘Bubble Bath’ to name a few – my companion went for a ‘Lavender Daiquiri’ (£7.50) – perfect for summer, with HavanHavana 3 rum, Koko Kanu, coconut cream, lime and pineapple juice topped with lavender foam.

I went for the ‘Dead Red Zombie’ (£8.95) A secret ingredient blended with El Dorado 3 Year, Santa Teresa Rhum Orange and Wray & Nephew. Not for the faint hearted, as it was strong and lived up to it’s name, the cocktail was complete with a passion fruit garnish and dry ice pouring over the top and smoking down the glass. So impressive was said drink that it caught the eye of the ladies on the next table who quizzed us on our choices. 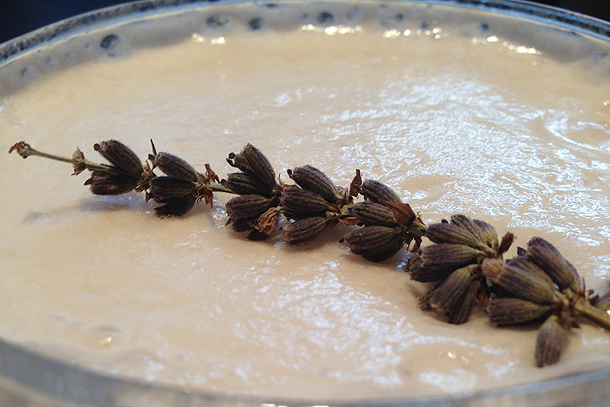 Our waiter for the evening was Kiko: energetic, knowledgeable and very friendly. Something that seemed to be a running theme throughout all of the ‘Living Ventures’ venues, of which Alchemist is a part of, is the staff’s product knowledge and how to tailor that to the needs of the customer. With a recent drop to the standard of service at The Alchemist, we are relieved of the staff replenishment by managing director of The Alchemist brand Sue Crimes.

Onto the food. For a starter I went for a new dish: the ‘Sticky Pork Rib with Red Cabbage Coleslaw’ (£7.50) and my friend, the ‘Prawn & Coriander wrapped in filo pastry with Thai shrimp Crackers’ (£4.95).

The Pork rib was fantastic. One large rib with both crispy and meaty sections to it, glazed in oriental sweet sauce and garnished with chilli and spring onion. The meat slid off the bone and was almost like pork belly on one side where the crispy fat sat on top. The red cabbage coleslaw was creamy and complimented the heat of the dish. 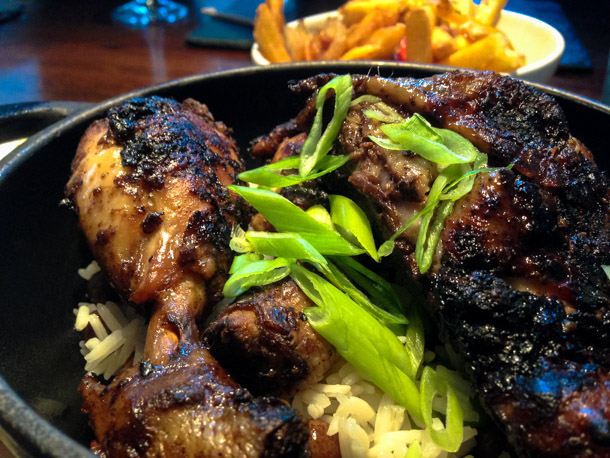 The Prawn filo pastries were visually interesting in their presentation but in comparison to the grandeur of the ribs, they lacked the wow factor a little.

For our mains I ordered a new dish ‘Jerk Chicken with peas, rice and dumplings’ (£9.95). Well presented in a rounded dish on a slate mat, the meal came with a rich hot sauce jus on the side. The chicken itself – all off the bone for that extra flavour – had been marinated for over two hours in spices, flame grilled and served over a rustic medley of rice, green and black peas. The dumplings were fluffy, but quite dry on the outside. 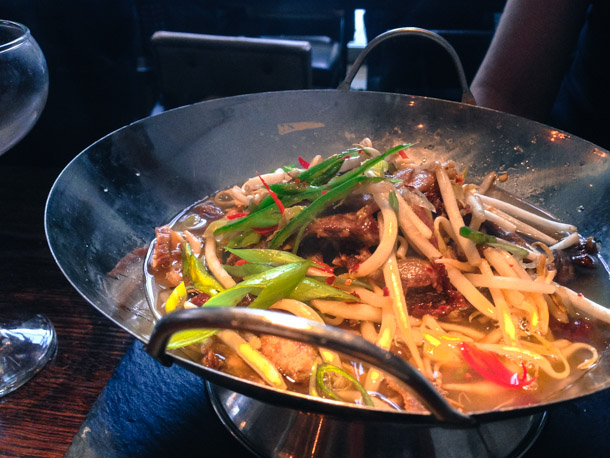 My companion had the ‘Japanese Ramen with Duck’ (£11.95): a spiced broth with soft thin noodles, oriental vegetables and crispy duck pieces. On arrival, the duck and vegetable mix was served in a rounded, elevated dish, with the broth in an Erlenmeyer flask on the side, (cue images of being back in chemistry class) which was then poured over the dish with dry ice. A cloud of smoke pouring over the sides, it’s certainly a great spectacle and something different, with a real sense of dining theatrics! This was a really flavoursome and fresh dish and could be served mild or hot with a choice of chicken, prawn or beef fillet if you didn’t desire the duck: a definite winner!

Finally, we managed to squeeze in a dessert. From the recommendation of Kiko (who may I mention had been excellent in attending to drinks, providing recommendations and had refreshing a sense of humour) the ‘Belgian Waffles’ (£4.25) with cinnamon, sugar and vanilla ice cream. Moreish and well proportioned. 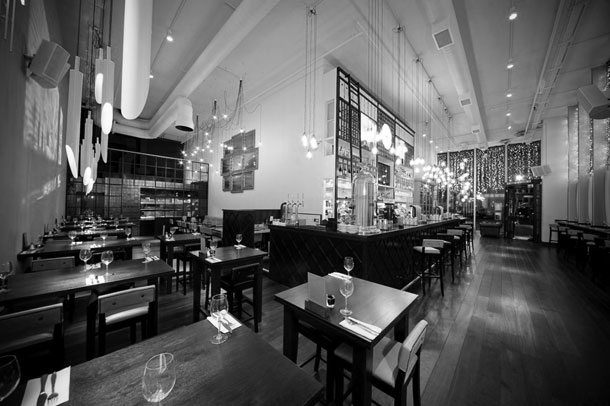 With a smaller and more intimate dining space than New York Street, the Spinningfields Alchemist gives you opportunity to converse with other diners (should the mood take you), and see the other great creations on offer. We witnessed a board of flaming Fajitas fly past, and the metamorphosis in appearance of the popular ‘The Colour Changer’ cocktail just from the tables around us. The theatrics and knowledge of the menu from the staff certainly sets this apart from their competitors, not to mention great value for money.

For those of you familiar to Spinningfields, it’s also noticeable that the large ‘All Saint’s’ clothing store next door to the Alchemist has shut. We can now reveal that Living Ventures is about to extend the Spinningfields Alchemist next door into the abandoned retail store making it the largest in the country. On site manager Ryan told us:

‘Hopefully by the end of this year, beginning of next we should be completed.’

Increasing The Alchemist’s coivers to 250, this is a very exciting time for fans of the eatery. After the launch of the NYS site, attention is going to switch back to Spinningfields as the place to enjoy those lovely White Cosmopolitans and Bang Bang Chicken Salads.