“It will be resurrected!” Those were the words of Blue Badge guide Jonathan Schofield as we stood looking down onto London Road Fire Station from Piccadilly. It’s one of those places people often say “Wow! What is it?” A beautifully-decorated building of red brick and terracotta built in 1906 at the height of civic pride. Closed since 1986, a recently announced series of summer tours will open up the past like never before.

It’s not your typical fire station. It’s a Grade II listed building designed by architects Woodhouse, Willoughby and Langham and a landmark example of Edwardian baroque which cost £142,000 to build at the time – about £20 million in today’s money.

There are towers, trellises, apartments, even a creepy coroner’s court, all ready to explore. 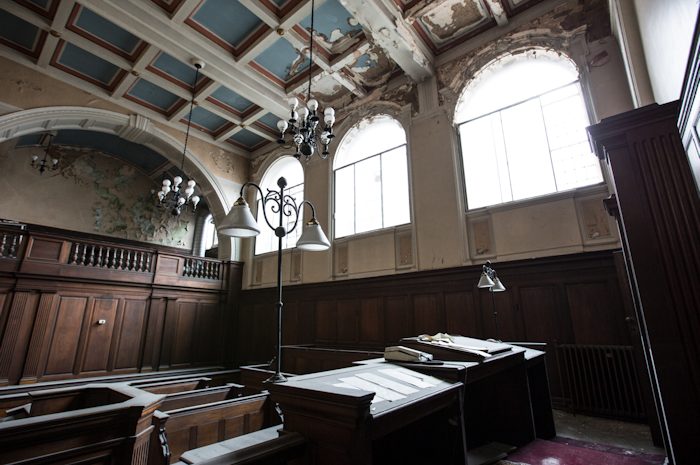 “Built by the city when it was feeling mighty,” according to Schofield. The redevelopment of the building has been driven by popular demand, with many local petitions to save it and a public consultation in November. This is the building the people refused to let go.

Now you can get inside it and feast on the ‘romance of decay.’ It’s been left exactly as it was. There are plenty of real-life stories and quirky facts, even a ghost story or two.

“I love the building and its humanity,” says Schofield and it seems many other people do too- over 600 have signed up to the tours in four days!

We were treated to a preview, which included a walk round the impressive building and an in-depth look at some of the statues. Female figures clutching fire and water, a sailing ship – “All about stability, wealth and the British Empire,” says Schofield. “The whole thing is a symbolic gesture of a city that was feeling proud and powerful.”

Tours typically last 80 minutes and explore the history of the place from its planning in 1896, to its time as a ‘city in itself’ serving and employing the people of Manchester.

This was a place people lived (part of the building is apartments) and loved. There was even a bar where firemen were allowed to drink on-shift!  At its height, it incorporated a police station and world-leading training area. The tour also includes the magnificent courtyard, engine room and court.

There was devastation when the place closed in 1986 and it remained untouched for years  with only the occasional urban photographer venturing in. For it to be open after all this time is a chance to see history in its rawest form. One of my favourite parts is the chance to go inside the coroner’s court decorated with eerie bluebell designs and documents still open in the dock.

Allied London, the building’s new owners, have big plans for the future. Having taken over the building in late 2015, they have revealed an extensive restoration plan which includes a hotel, signature restaurant, stylish bar and an arty cinema, and a transformation of over 10,000 sq ft of basement space in the pipeline.

Tours of the building take place on Thursdays, Saturdays and Sundays and throughout the summer months starting from July 2nd. Tickets cost £10 and can be booked via jonathanschofieldtours.com