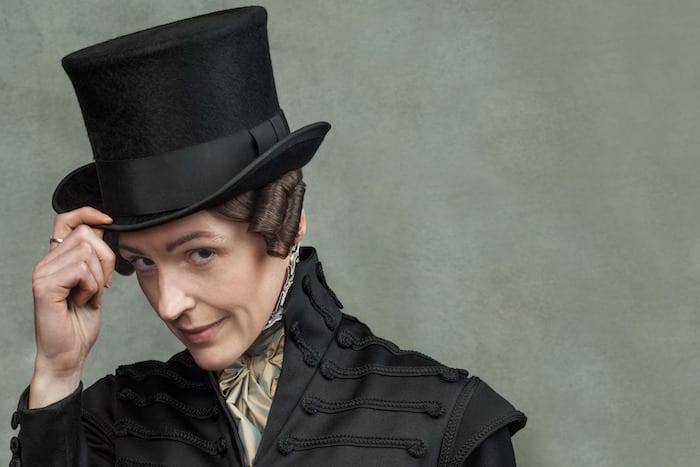 Suranne Jones takes the lead in a new drama by Happy Valley’s Sally Wainwright about Anne Lister, the transgressive landowner who returned to Halifax in 1832 to restore her ancestral home, Shibden Hall, to its former glory.

Intellectual, verbose, swaggering and unapologetic, Anne defied society’s norms. She was also determined to find love, and financial gain, with a woman, and set her sights on the heiress Ann Walker, played by Sophie Rundle. The series, the first of many it’s hoped, explores their burgeoning relationship.

Suranne, who was born in Chadderton, attended school in Middleton and enrolled in the Oldham Theatre Workshop before finding fame on Coronation Street in the early noughties, tells us about playing the passionate northerner, and how Anne paved the way for the LGBTQ community.

Did this complex role feel something of a gift?

Yes, on many levels. Sometimes you think, I’d like a part where I can use the 40 years I’ve lived as experience on a role so to get someone who’s 41 and as extraordinary as she is was amazing.

Sally and I were talking only the other day about how epic Anne is, how epic she makes her world. It’s so mammoth, the task of taking her on, when I got the role, I knew I had a lot of work and research to do.

What was the biggest challenge for you?

I was very tired at the end of each day.

Would you describe Anne as predatory?

We were very careful to tread that line because at first she was interested in Ann Walker for money and we had to plan a clear point in the script where actually things changed for her.

We plotted out very carefully where she started to care for Ann, where she fell in love, because I don’t think she was [predatory]. The word sounds too harsh for what she was.

Ann has so much strength and shines a light back at Anne Lister in a way no one else does so that’s the beauty of it as well.

What did it mean to work with an intimacy director on the sex scenes?

I think it was really important, and actually it’s the psychological, the intimacy, the tenderness we went for so there’s a lot of looks that speak volumes and being really comfortable with each other. It didn’t need to be gratuitous in any way.

Even the bed scenes we were fully clothed because if someone walked in on the two of us, we’d have to very quickly pull our nightgowns down and pretend we were friends.

It worked so well without showing too much. It’s beautifully done.

Did you have conversations as to how big to go with Anne’s swagger?

Sally would often say, ‘Make your presence bigger’ and ‘Do the superhero stand’ and I guess with the rehearsal process, it became second nature so it didn’t stick out like I was trying to be anything, it was just in my bones by the time we got to film.

And it’s about confidence. We played with social awareness, and spatial awareness so she gets very close to people and she checks people out and she’s checked out of scenes before other people have finished talking because she’s onto the next thing.

The strength and the energy and the love for life is the superhero part because it’s so uplifting. Sally often talks about her positive mental health and I think that’s another superhero quality that we should all like because we often don’t feel that about ourselves.

Did you film a lot at Shibden Hall in Halifax?

Yes, and I’d gone on a recce more than six months before we started shooting and we walked all around the land, to where her coal pits were, and it was beautiful.

To be in her living room and to be reading excerpts of her diary and playing them out in the actual space was just amazing.

How do you think Anne paved the way for LGBTQ community?

What they were doing was so transgressive. There was no community she could look to. Lesbian wasn’t even a word.

Gentleman Jack begins on Sunday 19th May on BBC One.