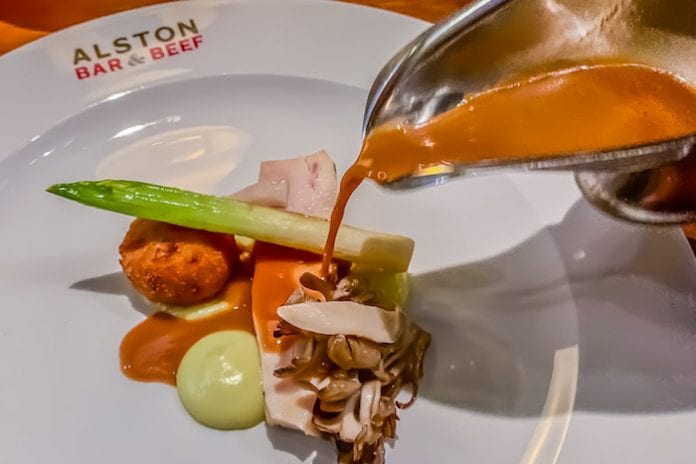 Fans of hit BBC show MasterChef: The Professionals all have one desire in common: to try the amazing looking dishes the chefs produce for ourselves.

And thanks to a series of supper clubs currently touring the country, we’re now getting the opportunity to sample the food cooked by the three young finalists which so impressed the judges in the cookery competition.

As part of the Sauce Supper Club tour, 2019 winner Stuart Deeley and fellow finalists Olivia Burt and Exose Grant Lopo-Ndinga showcased their incredible culinary talents with a six-course dinner at a pop-up event at Alston Bar and Beef at Corn Exchange Manchester. 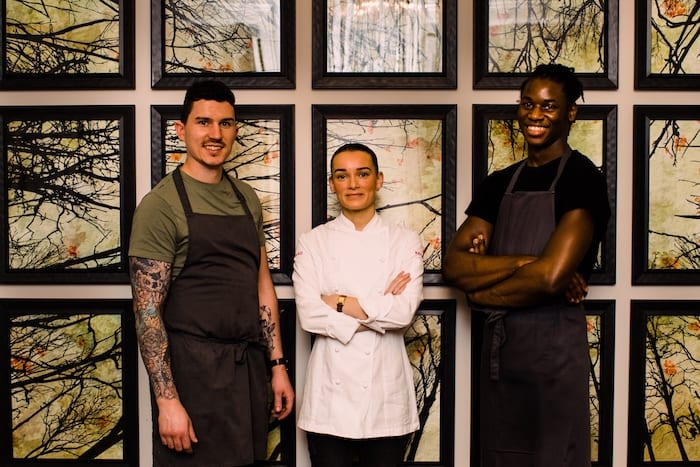 Stu Deeley, 28, from Birmingham, was crowned the winner of MasterChef: The Professionals 2019 after a close final between the three.

Judge Monica Galetti described him as “the complete package,” with Marcus Wareing adding: “He came in here to find confidence, look at the chef who is going to leave this comp. What a star we have found.” 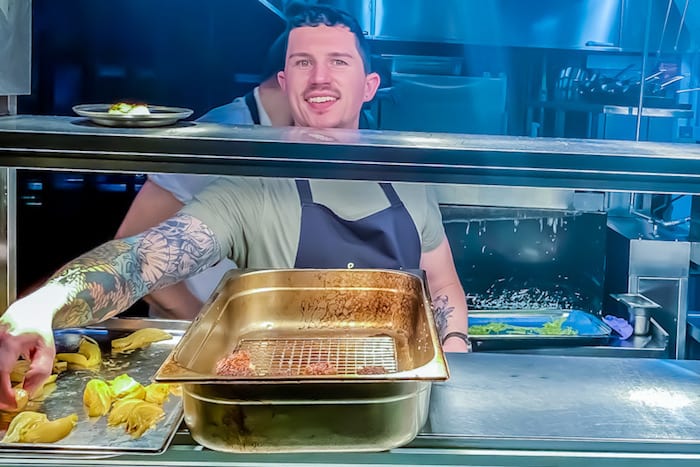 He impressed in the Critics Round, prompting Tom Parker Bowles to describe his cod dish as “an ambitious, intelligent, beautifully-put together dish” and Jay Rayner to call the blood orange sorbet in his dessert “brilliant”.

Stu’s talent was evident from the first dish to be served at the supper club: a delicate soy and mirin-saked salmon ballotine with taramasalata and smoked almonds.

Fans of the TV show may recognise it as based on the starter he served in the final, before going on to crowned the winner. Monica felt it had “great flavours, great textures – delicious” – and we couldn’t agree more. 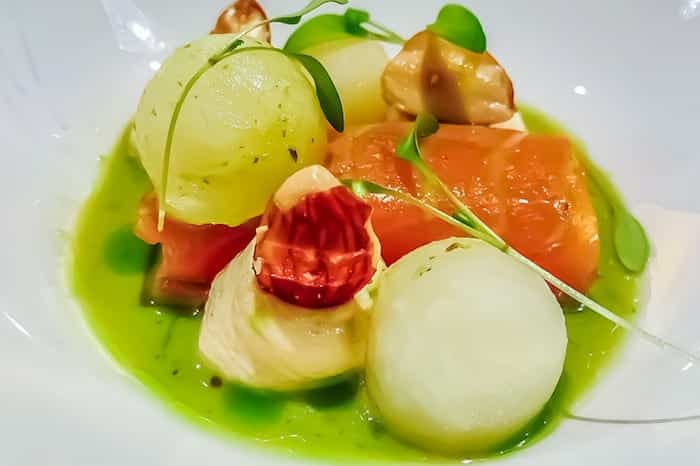 The second dish was provided by Exose, a 22-year-old chef de partie at James Martin Manchester who trained at South Trafford College and impressed judges with his “ambitious, boldly flavoured and elegant” dishes.

Based on his jaw-dropping ‘chicken five ways’ from the show, Exose cooked chicken three ways for the supper club. 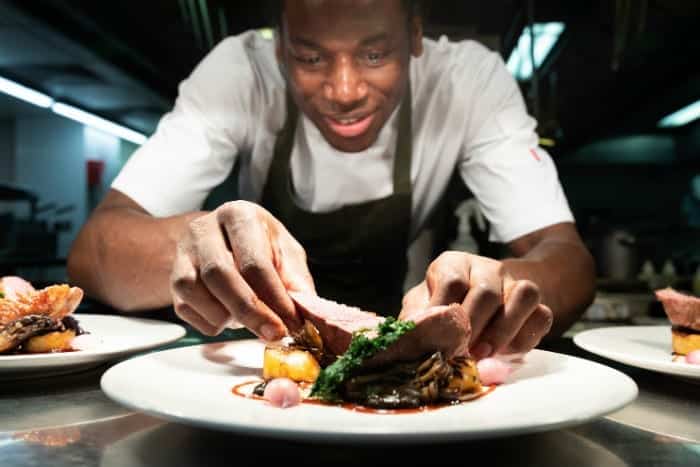 We were lucky enough to meet Exose’s family, who had come along to support him at the event, and their pride in the young chef’s talent was heartwarming.

Next up was Olivia’s roast halibut dish with barbecued winter kales and a rich chicken butter sauce, served with a vivid green broccoli, ramson and caper puree and garnished with crispy chicken skin. 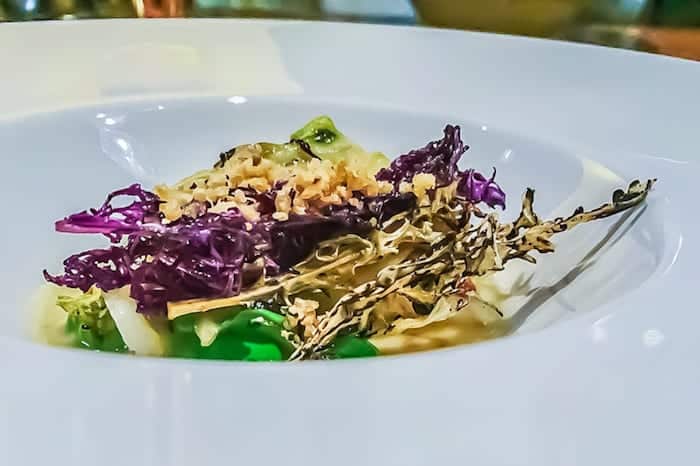 24-year-old Olivia, whose culinary background includes being sous chef at five-star-hotel Claridges, won over fans from the very start of the show, and this dish proved why. 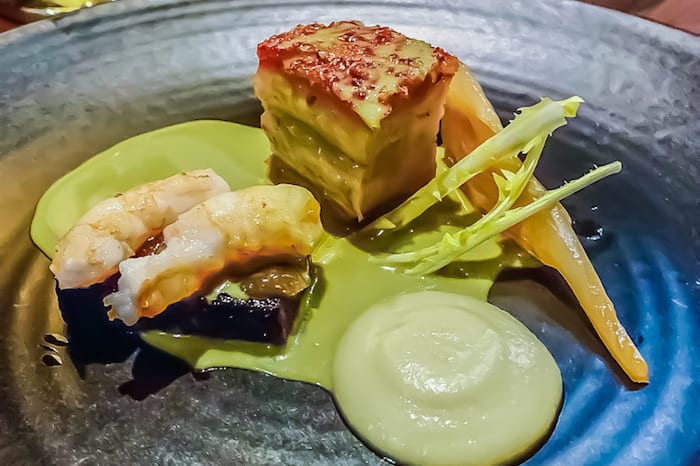 Jun Tanaka called his dish a “masterclass in beautiful ingredients, cooked perfectly”, Galton Blackiston named it the “dish of the day”, and two-Michelin starred Mark Birchall told Stu “that dish was amazing. Everything was cooked absolutely perfectly.”

And it was easy to see why, having tried it. Stu is undoubtedly a rising talent to watch.

The first dessert came from Exose, who wanted to recreate the dish that got him straight through to the final six in the show. 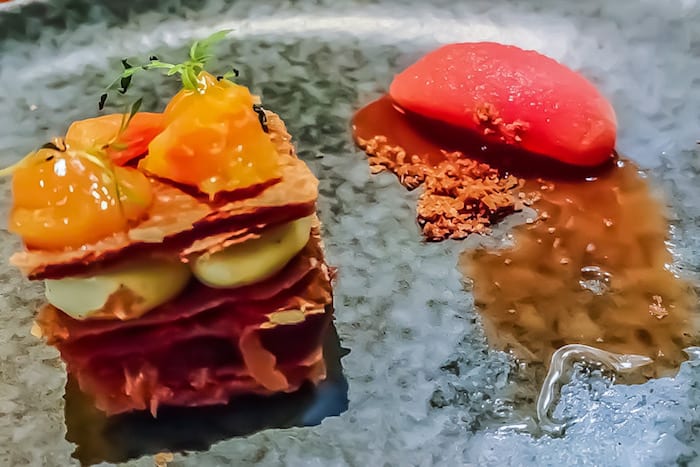 His chocolate and orange mille feuille was delicious, with a hint of warming cardamom, and served with a sweet-sharp blood orange sorbet. 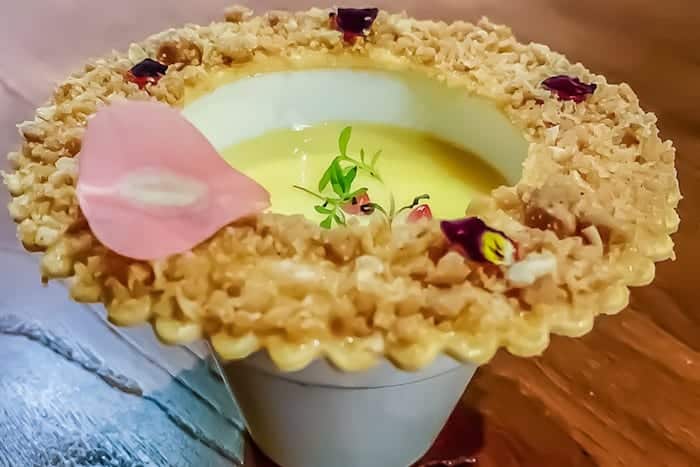 With pretty pink forced rhubarb, creamy buttermilk custard and an almond oat crumb, it was a new take on the classic – and decorated with edible flowers for added elegance.

“These events are a great opportunity for chefs and diners alike to get together and talk about all things MasterChef,” explained director and founder of Sauce Supper Club, Beth Toovey. 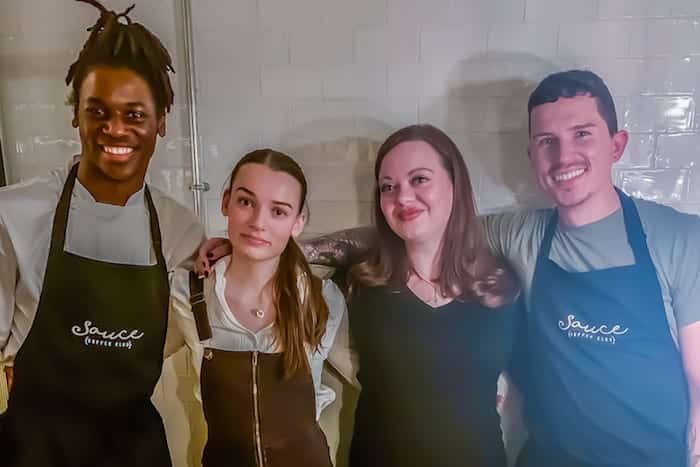 “To be able to eat the dishes that wowed the judges is unique and really exciting – the events have been really well received.”

It’s easy to see why.

Check out the Sauce Supper Club site for forthcoming events, including more featuring the MasterChef: The Professionals finalists. 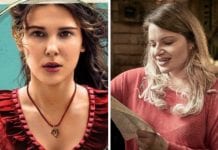 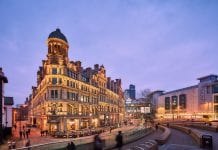