Suicide is the biggest killer of men under 49 and women aged between 20 and 34 in the region. Every year, over 200 people take their own lives across Greater Manchester.

Research suggests that talking honestly and openly about suicide can help save the lives of people who have considered suicide.

Now a brand new campaign has been launched which aims to break the stigma of talking about suicide, suicidal thoughts and suicide bereavement.

Commissioned by the Greater Manchester Health and Social Care Partnership and backed by Mayor Andy Burnham, Shining a Light on Suicide has been created to prevent suicides and to tackle the issue head on by encouraging us to talk openly about suicide.

The launch took place today at the University of Salford, hosted by DJ and mental health campaigner Dave Haslam. 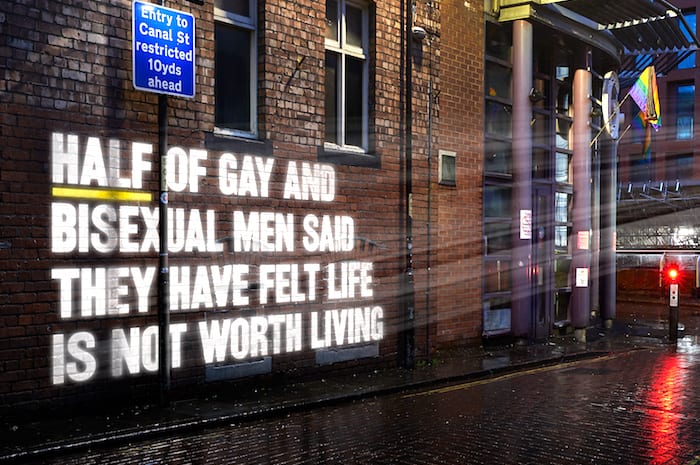 Suicide survivors, people who have been bereaved through suicide and organisations which work to prevent suicide all came together in a group discussion for the campaign’s launch.

“We are losing parents, children, friends, colleagues – the people around us – to suicide and this campaign is right, enough is enough,” said Mayor Andy Burnham.

“For every suicide that occurs, there are up to 20 more suicide attempts and one in five of us have had suicidal thoughts at some point.

“The Shining a Light on Suicide campaign will not only highlight the facts about suicide in our city region but show people that there is nothing to be feared in talking about suicide and mental health.

“By getting people to talk openly about suicide, the campaign will hopefully help reduce suicide and improve mental health.”

With a short film, website, and a toolkit for all partners, the campaign will inform people how to help those with suicidal thoughts and support those bereaved by suicide.

Alongside this are a number of short films which featuring personal stories of suicide from across the region and about those who have been directly affected by suicide.

Former England rugby player Danny Sculthorpe is just one of several guests to appear in the short films.

The 39 year-old father of three was capped eight times by England and represented elite Super League clubs including Wigan Warriors before a career ending spinal injury aged 30 left him tormented by depression and suicidal thoughts.

“The biggest thing that saved my life, even more so than medication, was talking,” said Danny.

“Shortly after telling my wife and parents about my suicidal thoughts a massive weight came off my shoulders. We spent hours talking and crying.

“Unfortunately, the injury I sustained left me feeling that I could no longer provide for my wife and children. I went from being an elite sportsman to being pretty much bed bound and knowing that I wouldn’t play again. Bottling it up pushed me to the edge.

“But I got it all off my chest which was an unbelievable feeling. I also visited my GP, was prescribed antidepressants and spoke to a counsellor on many occasions.”

“I’m now much better and am so thankful that I spoke to my wife and parents on that day when I’d reached my lowest point. If I hadn’t, and instead acted on my suicidal thoughts, I would have ruined so many people’s lives.”

Building a culture where it’s ok to speak openly and honestly about suicide is the campaign’s main goal, taking a proactive approach with early intervention and prevention.