It’s not often that a busking group manages to get people dancing on the streets of Manchester. But it seems Ruff Trade have cracked it.

People often stop to watch this reggae collective aged from 5 to 70 with a lead-singer who oozes Bob Marley charm who’s not even in his 20s.

It’s not an uncommon sight to see people dancing along – from little children to the elderly. Renditions of One Love have had people singing along and some even in tears.

Straight out of Gorton, Ruff Trade are uniting people from all walks of life, bringing some love to Market Street and Piccadilly with classic reggae covers and their own tunes.

They’ve had festival and gig slots Hootananny Brixton, Manchester Academy and Manchester Caribbean Carnival to name a few. And there’s an album on the way. 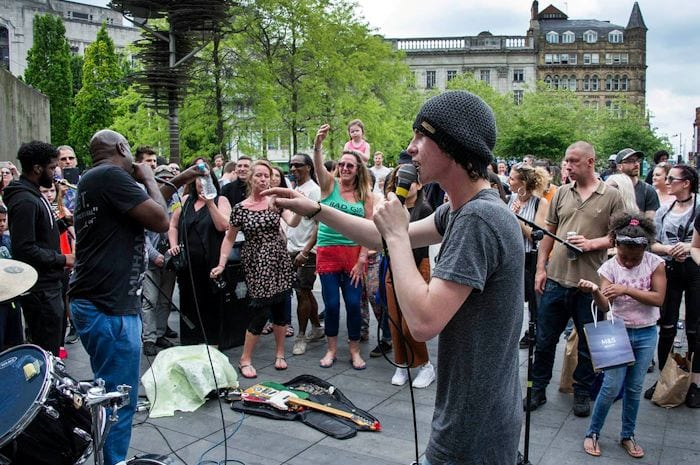 Who are Ruff Trade?

We’re a reggae family. A group of friends and session musicians who enjoy reggae music, its culture, everything about it. We love our home city of Manchester and the rain that comes with it.

How long have you been going?

Does the line-up often change?

Ruff Trade is a constant evolution both musically and personally. We treat everyone we work with as family regardless of age. We are a mix of creatives, all with different backgrounds. From Rico who’s 5 to Rowland who’s 70 everyone plays a part in the Ruff Trade crew.

Reggae music is music that unites people and presents a positive message. In this day and age when we don’t know what to believe in the world news and politics, artists like Bob Marley and Peter Tosh and many others since have questioned society, explaining all is not as it seems through their music.

Now nearly 60 years on people are starting to wake up. The songs to us are more relevant than ever before. Reggae is roots music and we always have been told to never forget our roots!

Who are your influences?

Obviously reggae greats such as Bob Marley, Peter Tosh, Bunny Wailer, Dennis Brown. Plus UK reggae artists and bands such as Aswad, Steel Pulse and UB40 have also had a big influence on us.

We have to big up the originators of reggae across the world such as Lee Scratch Perry, Bunny Striker Lee and Dennis Bovell, amongst others, as they have given the genre different flavours. They have been big inspiration for all the Ruff Trade family.

We have taken a lot of influence from local Manchester-based reggae artists who have taught, guided and inspired us to do what we do and this year have been privileged to work with Seychelles reggae star Golty Farabeau and Jamaican legend Prince Hammer.

What is it about busking you particularly enjoy?

Busking takes the music to the people. When we play reggae music on the streets it breaks down any barriers. Any religion, colour, sex, age – everyone is accepted, everyone smiles. It’s social musical therapy, lifting the mood of the people in the city.

Manchester has terrible homeless and drug problems that the council and authorities do not seem to be tackling. Many of these people are stuck in the crazy circus of life and they may never have the facilities to go and watch live music at an established venue or festival.

Sometimes these people aren’t the easiest people to perform around as they are often under the influence, they brawl between themselves and invade your personal space – often on  spice which is at epidemic levels from what we are seeing on the streets of Manchester.

We look past their situation and greet them like we greet any other human being. We believe that the government should look at its war on drugs, especially cannabis legalisation. Legalisation would get people off these synthetic imitations of a natural plant that has been tried and tested before law and order even existed. We are supposed to be ahead in the western world yet in this country we are well behind on the beneficial uses cannabis has both medicinally and socially.

How has Manchester influenced what you do?

Manchester is our home. It’s where we have grown up. The streets hold memories for all of us and since we have learnt our trade on the streets, the city means so much more to us than it ever has before. We have met so many people on the streets of Manchester forming some relationships that will last forever, pushing and driving us to never stop.

What are your plans for the future?

We have recently finished our debut original EP:  Urban Jungle that is due for release on CD on October 23rd 2017 and we are due to hit the prestigious Abbey Road Studio in February 2018 to start recording our debut album.

They are also set to collaborate with fellow Manchester band The Moods with a big home gig at The Bread Shed just off Oxford Road on 2 December.