The recent Manchester Food and Drink Awards saw a string of deserved city centres wins for the likes of The French and Alberts Schloss. But how many of us have visited the out of town winners on the list?

The Best Pop-Up award for Foodie Friday, the hugely popular street food event which takes place on the last Friday of every month, came as something of a pleasant surprise with Stockport finally getting recognition for its developing foodie scene. So we took a walk around the town centre with John Barratt of Seven Miles Out and organiser of Foodie Friday to get a feel for what’s going on.

Many years ago, the late lamented Frank Sidebottom wrote a song for John called Stockport Is Really Fantastic. He really did.

It was meant to be part of a comedy musical set in Stockport. The musical didn’t happen and the song was never officially released.

Foodie Friday is just one of the things which have changed in Stockport since then.

“Foodie Friday was started by Stockport Council,” John told me. “Esther Morrison and Paul Downs put things into place in 2013. Originally the Alty Market people tried to move in.”

Guerrilla Eats were the first traders to start at the markets where sometimes there would be more traders than locals, but the council stuck with it and things slowly built up to the point now where their efforts have been recognised by the MFDF.

We just won the Best Pop-Up award at @MFDF16! Thank you to everyone who supported Foodie Friday in Stockport this year!! #MFDFAwards 🏆🎉🍴🍻 pic.twitter.com/541W7PZjXW

We walked through the town centre, popping in to Tandems Coffee House (serving coffee from Heart & Graft), Allotment vegan restaurant, and had a special glimpse inside Where The Light Gets In, Europe’s first open kitchen, which looks incredible.

So, given all this, why does Stockport still seem to struggle with its image?

“The main problem isn’t other people’s perception of Stockport, it’s Stockport’s own people who don’t give the town enough credit,” says John. “I think now the town is recognising its potential in the same way the Northern Quarter did. There’s cheap rents, freedom to specialise, the Old Town is beautiful and people get a human experience coming to shop with independents.”

Another great night at @skfoodiefriday. Great to see so many people out having a good time in @SKOldTown :0) pic.twitter.com/tJPUJB9h9N

Recent chart success from local lads Blossoms has helped arouse interest in the town again, but it’s been the hard work of a number of people that has brought a revitalised sense of togetherness to the area.

“Places like Seven Miles Out and Foodie Friday were funded by the Portas Pilot. We pitched for money for the regeneration of the market and underbanks. The local community including Stockport College, MMU, traders and the Teenage Market people got behind the bid and Stockport Council have been very supportive of the plans.”

Big up to @skfoodiefriday for winning Best Pop Up Event! Always a great night… pic.twitter.com/gZ8NKtbVMJ

“There’s a greater sense of excitement here now, something Stockport used to lack. Seven Miles Out – a place for comedy, music, indy film and a whole lot more – is a community centre for the 21st century. During Foodie Friday, traders like Nasi Lemak and Fat Annie’s work together and collaborate to make these events work. Much like the success that (fellow MFDF winners) Heaton Hops have received, it’s the people that make places.”

Don’t just think of Stockport as the once great, now terrible, Merseyway. There’s so much potential and culture here in the Old Town and Foodie Friday is a major part of the social glue here, supporting local businesses and putting the town firmly on Manchester’s food and drink map.

Foodie Friday’s next event is on 28 October. 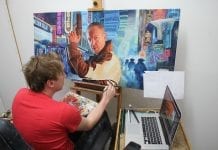 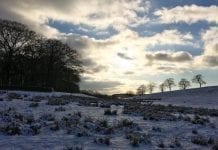 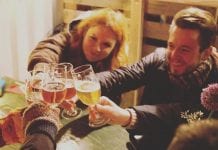 Winter Beer Festival to return in January with local brews, food and music 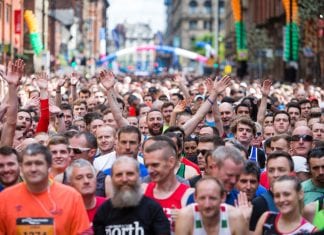