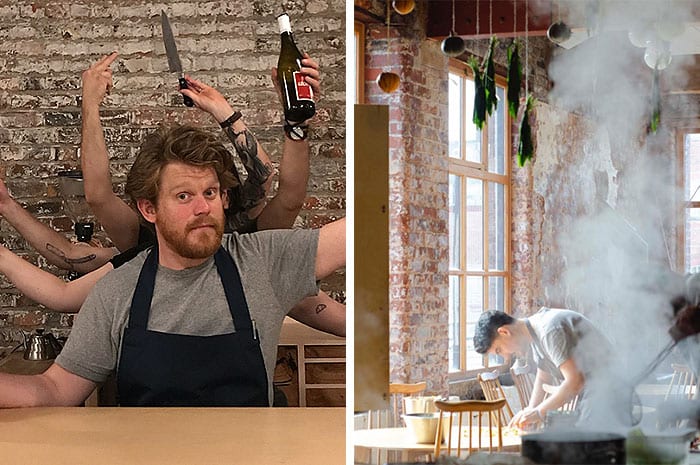 The chef line up for the Great British Menu 2020 has been revealed – and Where The Light Gets In chef Sam Buckley will be appearing on our screens to compete for the North West.

The acclaimed Stockport chef will be representing Manchester on the show, flexing his fine-dining credentials alongside some of the country’s best.

Hrishikesh also competed last year and is determined to give it another go after coming away with some very high points in last year’s regional final.

Now in its fifteenth series, the new season will air on Wednesday 18 March and run for nine weeks in total.

Some changes have been made to the format, with four chefs now competing in each regional heat instead of the usual three. More courses have also been added to give the menus a more contemporary tasting menu feel.

This year, contestants will need to create an amuse bouche and pre-dessert palate cleanser in addition to the starter, fish, main and desserts.

There will also be more drama as the chef with the lowest score after cooking their starter and fish course will be sent home, without a chance to show off their main and dessert.

The series will also welcome Susan Calman into the role of presenter after thirteen seasons without one.

This year’s Great British Menu theme will centre around children’s literature in honour of Charles Dickens and see contestants take inspiration from their favourite authors.

To help decide the best dish from each region, judges Oliver Peyton, Andi Oliver and Matthew Fort will be joined by different children’s authors and novelists every week.

Stockport chef Sam is a newcomer to the show, which previously featured acclaimed Manchester chef Adam Reid of The French at The Midland.

Known locally for his fine-dining restaurant Where The Light Gets In’s emphasis on sustainability andzero waste, including working with foraged ingredients and fresh produce from his own farm, we expect his menu will reflect his own ethical ethos.

Having first started his career working with Gary Rhodes, he then went on to work in a number of Michelin-starred establishments, including Tanja Grandits’ Stucki, Paul Kitching’s Juniper and Simon Rogan’s L’Enclume.

Amassing over 15 years experience in the industry, he launched Where The Light Gets In in 2016 with no backers and just a small personal loan to fund him.

Housed in a Victorian coffee warehouse off Stockport’s market square, there’s no printed menu or wine list to be found – just a highbrow concept, an open kitchen and intimate seating for around 30 diners.