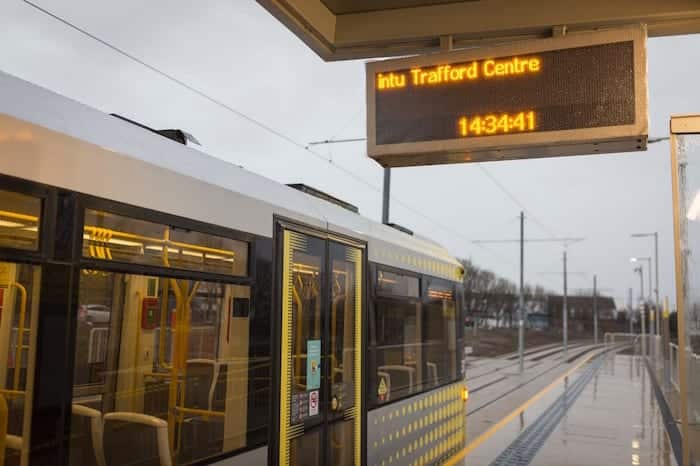 Trams to the Trafford Centre will start running in April – seven months ahead of schedule.

The formal announcement of the start date – subject to final testing and driver training – was made by Greater Manchester Mayor Andy Burnham.

It will run through Trafford Park, Europe’s largest trading estate and home to more than 1,300 businesses employing over 35,000 people.

Tram testing on the new line, on which construction was completed early in November, has been in operation for several weeks and has now reached the Trafford Centre.

The project marks the last of Metrolink’s £2 billion decade-long expansion programme – the so called “Big Bang” – which has seen new lines to East Didsbury, Ashton-under-Lyne, Rochdale via Oldham and Manchester Airport.

Mr Burnham said: “With Metrolink we are once again able to demonstrate a track record of delivering major schemes on budget and ahead of schedule.

“TPL was the first project to benefit from the devolution deal and is a shining example of what we can achieve with the right powers and funding.

“There is no doubt it is a blueprint for how Greater Manchester could run other transport systems in the future and represents a key step forward on our journey towards a more integrated, London-style transport system.”

The project is the first to benefit from the region’s Devolution Deal, signed by Greater Manchester leaders and central government, in November 2014, with a £20 million contribution from Trafford Council.

Once open, the line will represent a significant step towards ‘Our Network’ – Greater Manchester’s vision for an integrated public transport system that makes travelling around the city region easy, accessible and affordable.

“Trafford Park provides jobs for thousands of people as well as attracting millions of visitors a year who come to enjoy the many leisure opportunities that are available,” said Cllr Andrew Western, leader of Trafford council and Green City Region lead for Greater Manchester Combined Authority. “That’s why it’s important that we will soon having trams linking some of the most iconic visitor destinations in the north west.

“Also, it’s just as important for our efforts to create a greener region as it will offer a real transport alternative to people who would otherwise be driving their cars to watch Manchester United play or visit places like the Imperial war Museum.”

The Trafford Park Line will add to what is already the biggest light rail network in the UK, bringing the total number of Metrolink stops to 99.

Public support for the Trafford Park line was established at a major public consultation in summer 2014, where 89% of respondents were in favour.

The new 5.5 km line will have five new intermediate stops:

Imperial War Museum North positioned by the world-renowned museum with access to MediaCityUK via the existing footbridges:

Village, on Village Way, near Village Circle and Third Avenue:

Parkway at the existing Parkway Circle roundabout. The stop will include a Park & Ride with spaces for approximately 200 vehicles:

EventCity by Barton Square and EventCity.

Names of the stops have yet to be confirmed.