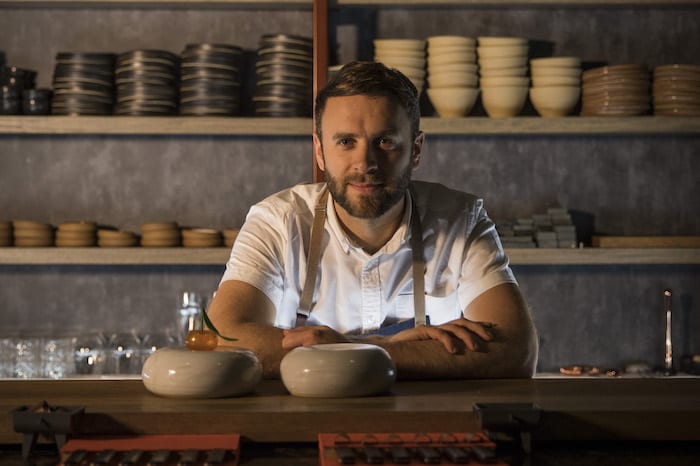 Two of these are in Manchester: Adam Reid at The French at number 26 (a rise from last year, when it made number 59); and Gary Usher’s bistro Hispi in Disbury at number 74.

The top restaurant according to the survey is in Lancashire. Earlier this year, Moor Hall, just a 45-minute drive from Manchester, was also declared the restaurant of the year at the Estrella Damm National Restaurant Awards 2019.

“Winning this award is a real boost for us,” said chef Mark Birchall from Moor Hall. “It shows that our guests really enjoy what we do and it’s great to have the focus on us up north.”

SquareMeal’s Top 100 is unique as it’s the only poll to exclude London restaurants, allowing the UK’s regional dining scene to truly shine.

“Having appeared on the Great British Menu, chef Adam Reid is passionate about using ingredients from the UK in quirky, innovative ways,” says the guide about The French in Manchester.

“This doesn’t mean flavour is sacrificed in favour of gimmicks though.

“Meanwhile, spot-on service with a friendly and efficient edge ensures a stunning gastronomic experience without any fine-dining stuffiness.”

Last year, The French was the only Manchester restaurant to make the Good Food Guide top 50 UK restaurants list, ranking an impressive number 13 for “cooking that has reached a pinnacle of achievement.”

“‘Understated but cool’, this crowd-funded bistro in one of Manchester’s ‘coolest suburbs’ was barnstorming chef Gary Usher’s third venture, following on from his critically-acclaimed Burnt Truffle in Merseyside and Sticky Walnut in Chester,” says the guide.

“He’s since added a further three restaurants to his growing northern empire but, in spite of such success, Hispi continues to serve up humble bistro food in a relaxed setting, as usual.”

Elsewhere in the UK, the first (and so far only) gastropub ever to win two Michelin stars, Tom Kerridge’s Hand and Flowers makes the top 10 at number 9; good news for Manchester, as the chef will be opening his new restaurant in the Stock Exchange this November.

It has been a strong year for the North of England overall, which has increased its tally of Top 100 restaurants to 21, up three since 2018.

“London gets the lion’s share of coverage when it comes to restaurants but SquareMeal’s UK Top 100 is gratifying proof that eating well does not end when you hit the M25,” said editor Ben McCormack.

“There’s never been more of an appetite for dining out in the UK – and UK diners have never been so spoilt for choice.”