SoLIta, one of the city’s most popular bar and grill joints, today announces the launch of a stylish new sixty seat beer garden.

Now open; the new alfresco dining and drinking garden is located alongside the restaurant on Turner Street in the Northern Quarter.

The decked garden, which features bistro style tables and chairs and summery blooms by SoLIta’s neighbour Frog Florists, is a joint venture in association with Paulaner Brewery and is Paulaners’ first beer garden in the UK.

Customers can dine and drink alfresco during restaurant opening hours, providing much needed space for the popular restaurant which has become renowned for its inventive, maverick burger and grill creations such as the Big Manc and, new for this week, the Game of Bones burger. A year round fixture, the beer garden will be heated during the winter and canopies will provide cover, when needed. 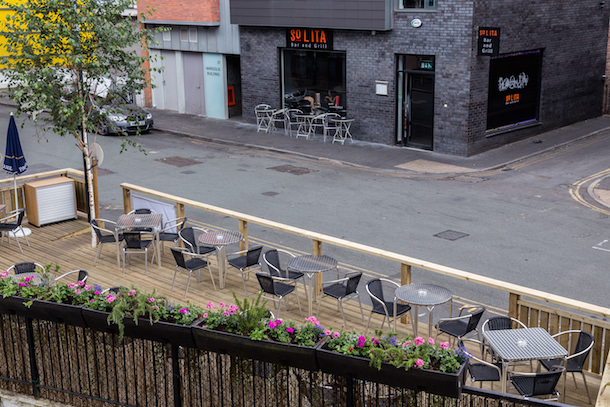 The launch comes as a double celebration for SoLIta co-owner Franco Sotigu as he confirms the news that he is set to open a flagship SoLIta bar and grill restaurant in Didsbury Village, at the site of the former La Tasca restaurant on Warburton Street. Aiming to open at the end of August, Franco says from the new beer garden to a new, major venue for Didsbury, these are exciting times for SoLIta:

“It’s taken a lot of work, around 18 months to get planning permission and licensing sorted so we’re thrilled to see the beer garden here in time for the sunshine!

“There’s a real lack of quality outdoor spaces in the Northern Quarter and we’ve already had some great feedback from residents and customers who say the garden has massively improved what was an eyesore of a street.

“Now we need to focus on Didsbury, which will have its own outdoor space and around 120 covers inside. We’re looking forward to bringing SoLIta to South Manchester- as for the food – expect our popular, signature grill menu and some lighter options too, we can’t wait.”