Immerse yourself this winter with Matthew Bourne’s gothic romance, Sleeping Beauty at The Lowry

This New Adventures Production has leaped and landed in The Lowry, Salford, and is performing every day until Saturday 26th November.

Bourne takes inspiration from popular previous retellings of the original folktale, including the long-established ballet of Tchaikovsky and Petipa, the Brothers Grimm Little Briar Rose story from 1812 and of course, the 1959 Disney amination that, arguably, most audiences will be familiar with.

The celebrated score by Tchaikovsky is of course prominent throughout and is delightfully distinguishable, given that Disney incorporated elements of it within its own magical adaptation.

The story begins with a brief prologue, introducing us to King Benedict and Queen Eleanor and their desire to have a child.

In 1890, dark fairy Carabosse fulfils their wish but regrets the act when King Benedict lacks gratitude, so retaliates by casting the infamous curse upon the child, Aurora.

Later, however, Carabosse dies and the palace believes that the curse died with her. Twenty-one years later, in 1911, it is a day of celebration at the palace for Aurora’s coming of age.

It is in this wonderful garden party setting that we hear the recognisable Sleeping Beauty waltz, the tune of Disney’s ‘Once Upon a Dream’.

Here, we are introduced to Aurora’s childhood love, Leo, as well as many other suitors who are bidding for Aurora’s attention. Among these admirers, Caradoc slips in, the grieving son of Carabosse who is out to avenge his mother and ensure her curse is executed.

The capabilities of the dancers are astounding, brilliantly able to depict personality and character traits through their movements. There is no pointe in this ballet, a contemporary change from the traditional that allows the dancers more flexibility in their movement.

Aurora, portrayed by Ashley Shaw , is wonderfully elegant. From depicting a faceless character within her parent’s nightmares, to playing the role of rebellious young adult, as well as showing through ballet how her love for Leo (Andrew Monaghan) grows and blossoms, she is certainly adept for the star role of Aurora.

Carabosse and Caradoc (both Paris Fitzpatrick) have the intense pointed movements perfected.

While the dancer’s performance gives an insight into the nature of that character, costume, hair, and makeup further establish their roles.

Both Carabosse and Caradoc don long black and red garments and have black hair. Caradoc has overemphasised black sideburns which add a sharp, angular shape to his face, reflecting on his style of movement, which rounds the character off nicely.

The production incorporates a variety of performance aspects.

Infant Aurora is at first, a puppet of a child crawling across the floors of the palace and up the huge, overarching drapes. The mischievous puppet gets lots of laughs from the audience, though depending on your disposition, you may find the puppet to be a – dare I say it? – creepy distraction from the otherwise beautiful and personifying ballet taking place. 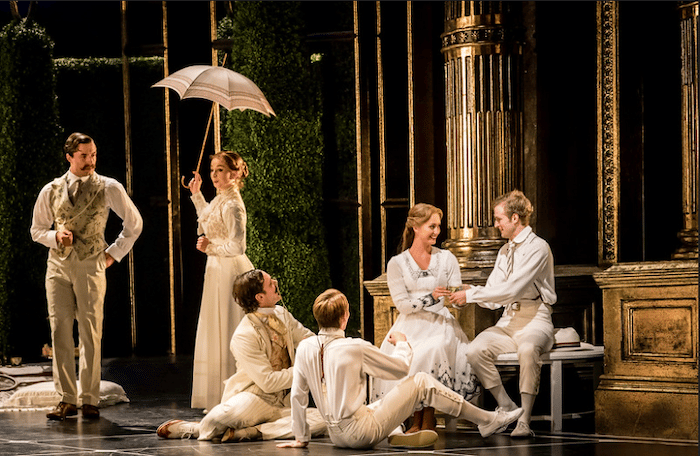 Set designer Lez Brotherston dresses a lovely garden party, with a grand weeping angel statue sitting towards the back of the stage, positioned in the forefront of the backdrop projection of the grand palace sitting atop a green, grassy hill.

The interior of the palace, specifically Aurora’s bedroom, is just as grand and lavish.

Windows that sit on the floor and scrape the ceiling allow for the immense, majestic moon to be clearly visible from the outside looking in, which equally provides a perfect backdrop and shadow silhouettes of each vampiric fairy that enters through Aurora’s window while she sleeps.

A unique feature of this set is that it has two treadmill/travelators that run across the back of the stage, each one running a different direction, either left or right.

Though not necessarily visible to the audience, we know it is there as we observe the dancers glide across the stage while holding their positions. At few various points, the opaque stage curtain comes down the front of the stage and a storybook themed projection illuminates it with brief images of text, pleasantly giving the audience further context, whether it is a description of what has occurred, or explaining the change in time.

The combination of the established Tchaikovsky score and contemporary retelling is quirky, and definitely unlike anything you’ve ever seen before.

Though, one might argue that the attempt at being too modern is unjustified. After the one-hundred-year sleep, Aurora awakes in 2011, which represented by the modern-day costumes of jeans and hoodies, which could have been more effective if it was more consistent (only five people of the entire cast and ensemble have this change of costume style).

The time jumps then from 2011 to ‘yesterday’, the day of Aurora’s wedding, however too much occurs ‘yesterday’ for it to be sensical, which then does not allow for a cohesive narrative.

This being said, Matthew Bourne’s Sleeping Beauty is an award-winning ballet; three-time winner of the Los Angeles Drama Critic Awards, and winner of the Ovation Award for Best Production.

Sleeping Beauty is on at The Lowry until Saturday 26th November, with the matinees taking place on Thursday 24th, and on Saturday 26th, the latter of which is an accessible showing. A touch tour will take place at 1pm, followed by the audio described performance by Caroline Burn at 2pm.

Tickets start at £17 for the weeknight performances, and Friday and Saturday showings begin at £20. Tickets and information on how to book accessible performances can be found here.

The performance is divided into two acts, the first lasting about sixty minutes, the second about fifty, and they are divided up with a twenty-minute interval. Please note, children under five years of age are not permitted, and some scenes may be unsuitable for a very young audience.