Should Deansgate be permanently closed to general traffic ?

The next stage of proposed permanent traffic changes to Deansgate have been announced as a fresh consultation is launched to understand public opinion.

Since the road was first temporarily closed support has remained strong for it to be made permanent.

A previous consultation found that the general public was overwhelmingly supportive of steps taken to fully close this key route, and the council is keen to build on that support in the best way.

Currently the road is closed to general traffic but is open one way for buses and taxis only.

What are the plans to reduce traffic on Deansgate?

The council wishes to reduce traffic in the city centre as part of its wider ambition to make the city carbon neutral by 2038.

Going forward the council is proposing to keep in place the current restrictions to most traffic along Deansgate but continue its support for public transport and taxis which are vital to the city by allowing some access.

Now a consultation has launched, running until Monday 26th July.

What changes are being proposed? 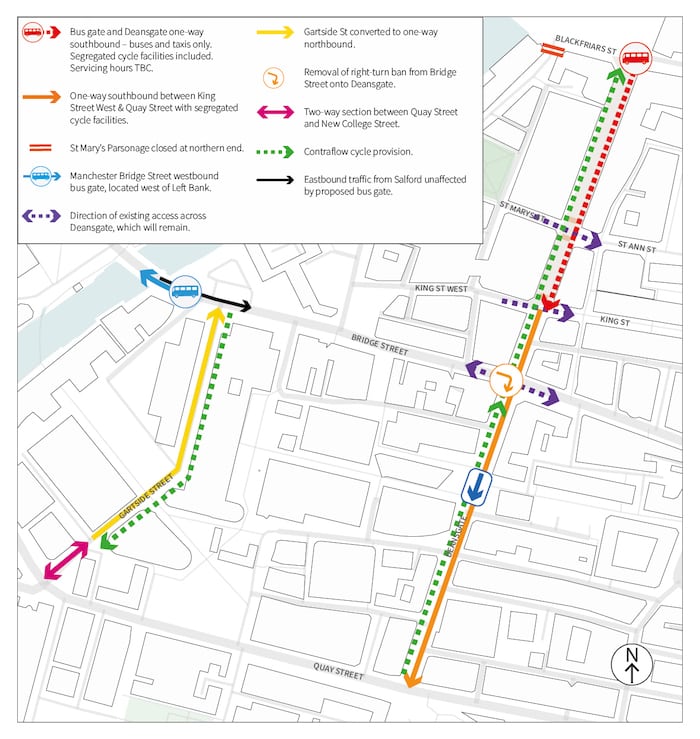 Some of the permanent changes that are being proposed in this latest round of consultation include access to the section of Deansgate between Blackfriars Street and King Street will be limited, except for open one-way travel in a southbound direction for buses, taxis and cycles.

Measures will be in place to improve pedestrian and cyclist usage and safety.

There will be a bus gate at the junction of Blackfriars Street and Deansgate for southbound buses, taxi and bicycles. The operation window and servicing times for business for this is still to be determined and comments are welcomed.

The section of Deansgate from King Street to Quay Street becomes permanently one-way only for all traffic, in a southbound direction with the northbound carriageway closed.

A contraflow cycle lane will run for the length of Deansgate from Quay Street to Blackfriars Street in the closed off northbound carriageway.

Under the proposals, St. Mary’s Parsonage will be remain closed to traffic at its northern end to prevent traffic from diverting around the closed section of Deansgate.

A bus gate will be created on Bridge Street, after its junction at Left Bank, meaning that only buses, cycles and taxis will be able to drive out of the city centre across the River Irwell into Salford via this route.  Traffic coming into the city is unaffected.

Gartside Street between New College Street and Bridge Street will be one-way northbound with a segregated cycle route in a southbound direction.

Buses will be permitted to travel northwards on Cross Street, and general traffic will not be able to proceed any further than the junction with New Market.

“The council as part of the City Centre Transport Strategy has for over 10 years sought to make real and lasting change in the city centre, altering the way so many of us travel in our day to day lives,” said councillor Tracey Rawlins.

“We have been listening and will continue to do so as this consultation progresses as we want a city centre that works for all of our residents, visitors and businesses.

“The council has bold ambitions to become carbon neutral by 2038, and radically increase the number of people walking and cycling or using public transport to travel to the city centre – 90% of peak morning journeys by 2040.

“Changes like this to Deansgate will lay the foundation we need to achieve these goals.

“I’d urge as many people as possible to take part in this consultation, and have your voice on Deansgate heard.”