It might be a little later than planned, but the team, led by owner Maurizio Cecco, had an immense task, transforming the space into a restaurant that provides passers-by with a true taste of southern Italy.

Maurizio already owns the Mozzarella Bar and Restaurant, as well as the Deli, in the Corn Exchange, and the Cucina and Pizzeria Napoletana on John Dalton Street, but he doesn’t mind admitting this opening has been stressful.

“I’ve been the most stressed because everyone knows the Salvi name, but we’ve got the formula and we know what we’re doing. We had a few issues, but it’s done now and I’m more excited than anything else to see how we’ll do in the Northern Quarter,” says the chef, who’s been looking to move into the area for a while. 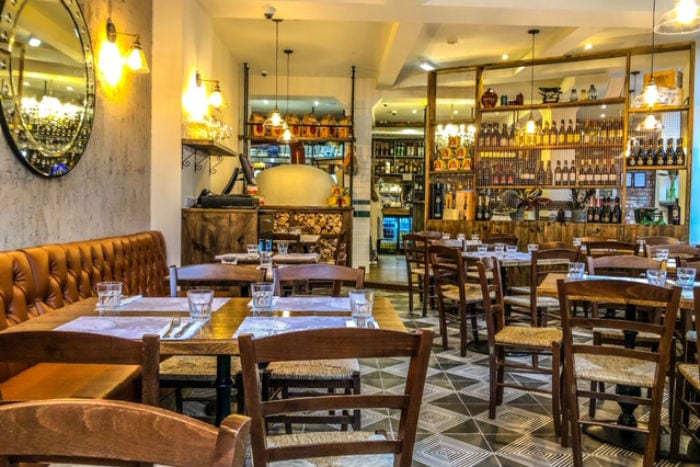 “Strangely enough, when we opened the first one, a place came up after a couple of months and we went to see it but because we were new and only small, we didn’t do go ahead with it. Since then, we’ve looked around a couple of places on Thomas Street but never did anything with them.

“And then this one came out and I thought, why not?”

With its corner position on High Street, it’s a prime location. As Maurizio says, “We’re still near the town but in the Northern Quarter as well. It’s very spacious, there are lots of windows everywhere, and the sun shines in all day.

“We’ll have tables all around outside, so if we have a good summer, it’ll be very nice.” 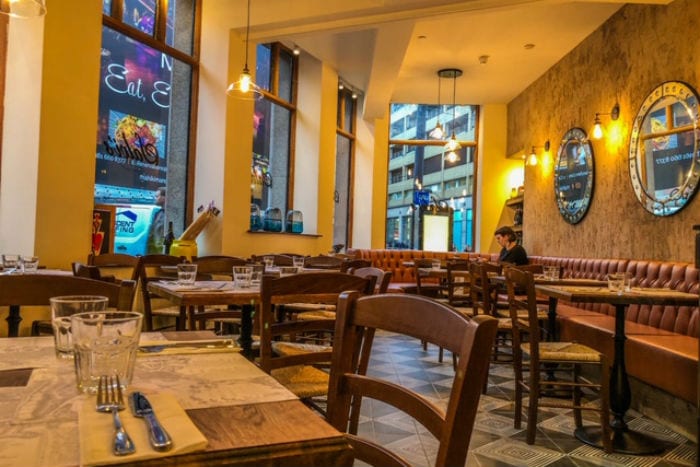 It’s a beautiful space with lots of light streaming through, even on a drizzly day in November.

As you walk in, there’s a bar to your right with a large chandelier suspended over the bar stools, and ahead of you, you can see the chefs working away in the kitchen.

A small seating area near the entrance is separated from the main restaurant area by a large display the Salvi team created themselves, which showcases bottles of bubbly and wine.

Where possible, they’ve included objects they’ve managed to scour and upcycle, including the large round mirrors displayed above the long brown banquette that curves its way around the restaurant. 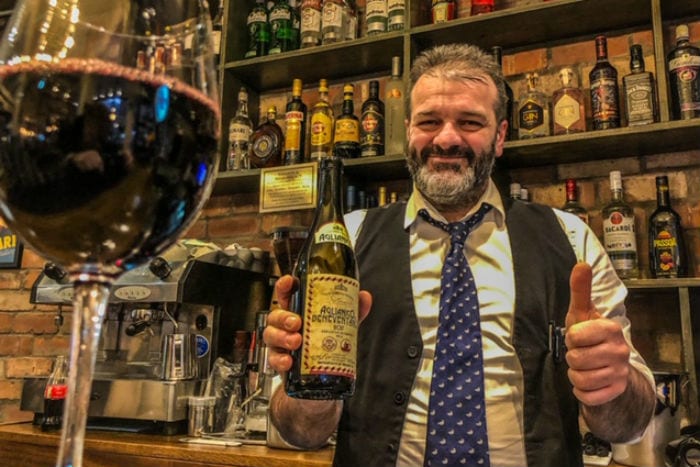 “We wanted to go more for green and brown. It’s the Northern Quarter, it’s very quirky, very different from everywhere else so we want to fit in. Obviously, it has the Italian touch with the tiles. It’s a great design,” says Maurizio.

But as the stylish as the décor is, here it’s all about the food.

“We use good products and don’t cut corners. When people go out, they want a nice meal and for it to not be really expensive. If we do charge a couple more pounds for a dish, it’s because of the products we’re using, and where they come from.

“Every dish we do is made with passion and love.” 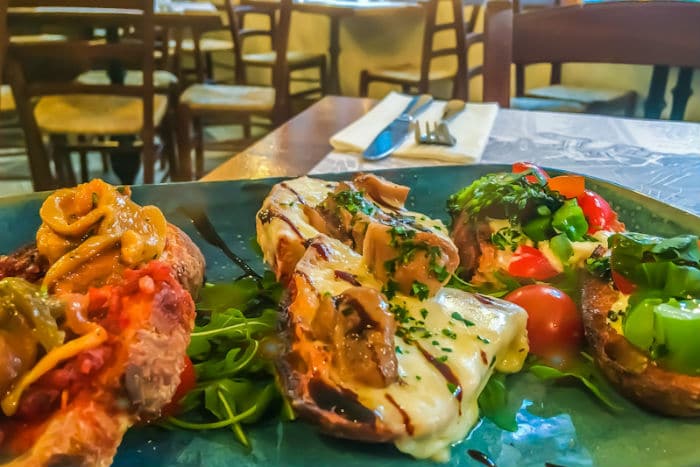 The menu at Salvi’s NQ includes a selection of nibbles and antipasti, pasta and pizza, as well as meat, fish and vegetarian mains depending on whether people want a quick bite or to sit down for a leisurely meal.

“I try to do Neopolitan food with a little twist,” says Maurizio. So, alongside traditional options such as pasta carbonara (£12.95), pizza rosse and bianche (from £11) and calzone, (from £12), you’ll find polpette di melanzane (£15).

“It’s meatballs that are made with aubergine served with a San Marzano tomato sauce, so the same process but a great vegetarian dish.”

As is the pasta con friarielli e pecorino (£13.95), which is pasta with wild broccoli and pecorino cheese. 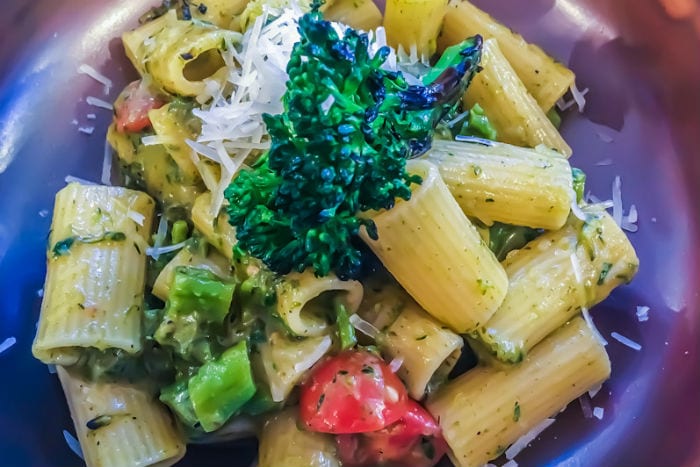 One of Maurizio’s favourite dishes is guazetto (£20.95). “It’s a seafood stew with tomato sauce, which is a bit like a soup. It’s just beautiful,” he explains.

“The menu is different at each site, so maybe one night you come here and have pasta with broccoli and then another time, the famous mozzarella we serve [in the Corn Exchange].

“We don’t want Salvi’s to be like a chain. The food doesn’t come from one main kitchen, it’s all cooked differently by different chefs, with their own kitchen and their own ingredients – and everything’s made from scratch.” 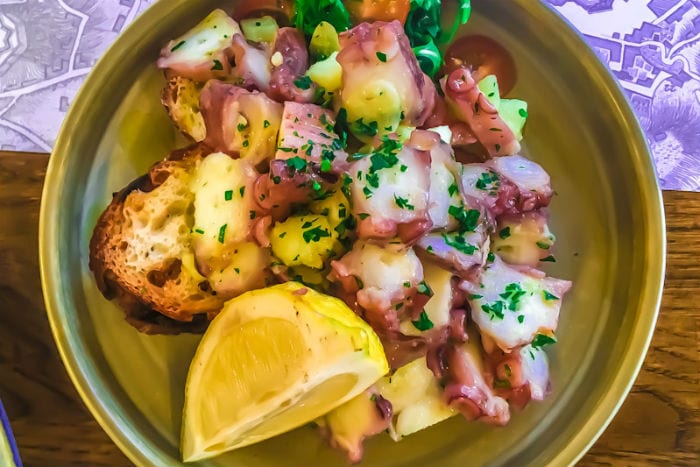 It’s why, despite being the owner, he likes to give the chefs at each site the freedom to suggest dishes.

“We’ll talk about it and try it and if I think it’s good, it’ll 100 per cent be on the menu,” says Maurizio who tries “to be everywhere, every day”.

“I visit all the sites. Sometimes you’ll see me cooking, sometimes I’ll be behind the bar. It’s a big business now but it’s like seeing my kids every day.”

“I’m going to stop here for now and then see what happens. With five different places, I’ve got a lot on. Mind you, I say that and then maybe next year I open another one,” he says, laughing.

“I don’t like to be bored, sitting at home.”