An art installation of brightly-coloured gift boxes has appeared at Salford’s New Bailey just in time for Christmas.

The unique installation features nine specially-designed larger-than-life presents, which have been scattered across the New Bailey site in Salford.

Contained within each is a unique Christmas ‘present’ that holds key significance to the history of Salford. These can be viewed by visitors through peepholes, which will enable the public to glimpse inside each box and discover the history within.

“This is based on the idea of sneaking a peek inside your presents before Christmas, which will hopefully instill a sense of childhood giddiness in the viewer,” says Carma Masson, the architect behind Salford Presents.

Her project looks to celebrate Salford’s unique history by gifting objects previously created or introduced to the world by Salford back to its residents this Christmas. 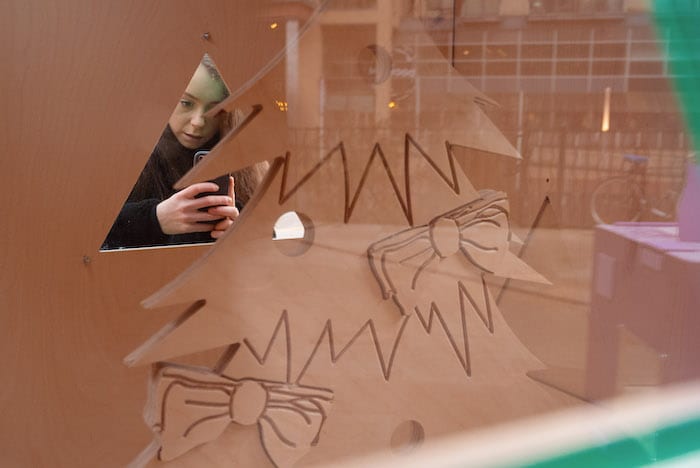 Carma worked closely with Salford and Manchester libraries and local history groups to source information ahead of designing the installation for New Bailey.

The nine objects concealed within the giant presents are a doll, a train set, a jug of beer, a candle, a Christmas tree, a boat, a book, a piece of coal, and soap – all objects, says designer Cara Masson, that you might also gift to someone at Christmas.

Each present comes with an information plaque explaining the object’s relationship to Salford. From a doll representing Salford’s cotton and silk trades to a jug of beer representing its breweries, there’s plenty of history to be gleaned here.

The piece of coal represents the Salford Coalfields, at one time one of the largest in the UK, whilst the soap represents Salford’s chemical industries, many of which were established and grew up in Salford, in what is now Salford’s Soapworks building.

“We were keen for the project to create awareness and strength local identity, creating a unique sense of place for this neighbourhood and, we hope, a sense of pride for local people that live and work in the area,” said Carma.

“Key to me when designing this project was to make an installation that educated people about Salford’s history in a fun and playful way and made them proud to live or work there.

“Salford’s history is so unique and rich – It was a real joy to research, and hard to choose only nine areas to focus on.”

As well as championing the area’s history and adding a bit of extra festive cheer to the New Bailey site, bosses also hope the installation will encourage public donations to local charity Salford Loaves and Fishes to help out vulnerable residents over the difficult Christmas period. 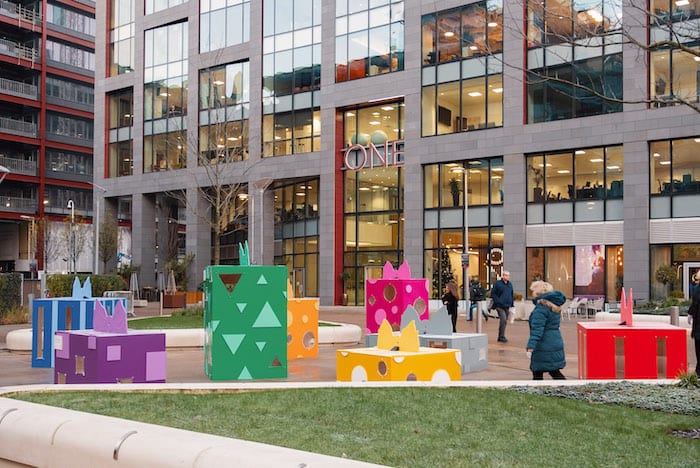 People interacting with the installation are encouraged to donate £3 by texting SALFORDPRESENTS to 70085 to donate to Salford Loaves and Fishes.

And the charity aspect will continue further with Salford local mental health charity START being gifted some of the presents at the end of the project, Carma tells us.

“We are currently looking for a home for each of the objects inside, so we encourage local people get in touch if you’re interested in housing one or all of the collection.”

“We are really excited to be part of this project which celebrates this special city and the great people who live and work here,” said Simon Locke, chief executive officer at Salford Loaves and Fishes.

“Everyday we witness the hard work, creativity and resilience of our local community who frequently face hardship and other life challenges.”

Based at its Paddington Close drop-in centre, Salford Loaves and Fishes works closely with local people in need providing support, along with food, clothing, warmth and shelter to give hope at a time when it’s needed most.

“Homelessness has increased by 540 per cent in the past six years, so this festive art is such a powerful way to help raise awareness and raise vital money for those in need. A big thank you goes to all those who helped make it happen,” said Salford City Mayor Paul Dennett.

The installation launched to the public on Monday 2nd December, and people will be able to visit the display until Monday 6th January at New Bailey.

Phil Mayall, regional director at The English Cities Fund, said: “Christmas can be a particularly tough time for some, which is why organisations across Greater Manchester come together to support those in need during the festive season.

“The installation of Salford Presents is a great way of raising money for a very worthy local cause, and Salford Loaves and Fishes is a charity we’re proud to support.

“In September, we issued a call for local designers and artists to come forward with ideas for a Christmas installation as we have done in previous years.

“Drawing on and respecting the history of Salford has been important to us throughout the build process of New Bailey, so we instantly felt that Carma’s fantastic concept was the perfect fit.”