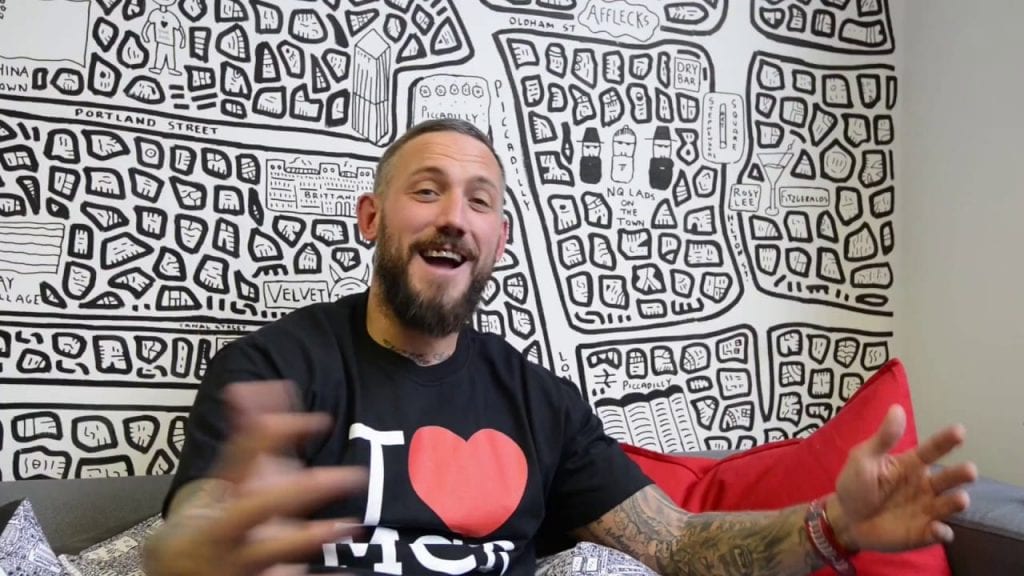 Salford lad James Davenport – also known as Shinny – is a local star who speaks his mind. And not just because it’s World Mental Health Day, either.

The former professional boxer has turned his hand to songwriting and singing, as well as hosting the twice daily Shinny Show Live on social media, where he speaks openly about his own life and struggles, including addiction and anxiety.

He wants to bring more ‘real life’ to social media, in an age when so many people present a false image of themselves and seek instant gratification.

“Snapchat, Instagram – so much is putting forward a fake version of ourselves,” he told us. “What we need to see is more honesty. People being open with each other.”

Honesty is essential to better mental health, according to Shinny.

With Shinny, what you see is what you get. And he’s on a path to better mental health following years of difficulty.

He told us how he has battled addiction, turning to drugs and alcohol following a successful boxing career.

In the absence of his favourite sport, they provided instant gratification and a different kind of hit.

Shinny is only forty but has already faced the cycle of dependency as well as the financial hardships which come with it – all of which he discussed openly with us.

If more people were open about their mental heath struggles, he told us, there would be less suffering.

“I say it as it is,” he continued. “But many men especially feel like they can’t talk about their feelings and this needs to change.”

We talked about the tragic statistic that suicide is the biggest single killer of young men in the UK. Men between the ages of 20 and 49 are more likely to die due to suicide than any other cause and Shinny spoke about the number of cases he’s become aware of recently.

“Everyone needs to recognise how important it is to talk about their feelings,” he said.

After all, people may look fine on the surface – which is how they present themselves online – but that doesn’t mean they aren’t suffering underneath.

You’d probably never guess that Shinny, a muscular bloke with a gold tooth and arms of impressive tattoos, wakes up every day and struggles with intense anxiety.

“To deal with it I count my blessings, think of my family,” he said. “I feel grateful for what I’ve got – think of my kids. Then I make a coffee and I’m ready to take on the day.”

He’s keen to talk about the help that he’s had along the way. Recovery fellowships and meetings have played a big part – and music too.

It was whilst he was in rehab that he began writing songs and last year took on the charts with a song called Christmas Number 1.

Although he didn’t quite make it – the song got to number 24 – he’s back again for another go this year.

BBC Radio Manchester’s Mike Sweeney has called it ‘an absolute blinder of a track!’

You can catch all Shinny’s highs and lows – if you haven’t already – on his popular Facebook platform, Shinny Show Live. With over 100,000 members in the group alone, people tune in to his online videos to keep updated with this Salford lad who says it as it is.

Expect plenty of laughs, shared life experiences and music updates. And he even gets passers-by involved.

“If I can make a difference to just one person by sharing some positivity then I’ve achieved something,” he said.

Shinny has a number of high profile fans.  Tina Malone from Shameless and Happy Mondays star Bez feature in the video for the Christmas single – and he’s been on BBC Radio Manchester too.

You can follow his progress on Facebook  as he aims for the festive top spot with Christmas Number 1 again – and he’s also working on a version of the David Bowie track Heroes to raise money to help the homeless.

Considering that today is also World Homelessness Day, it’s clear that Shinny is firing on all cylinders. Good on him.