Doctor Who has a new Master – and he’s from Manchester 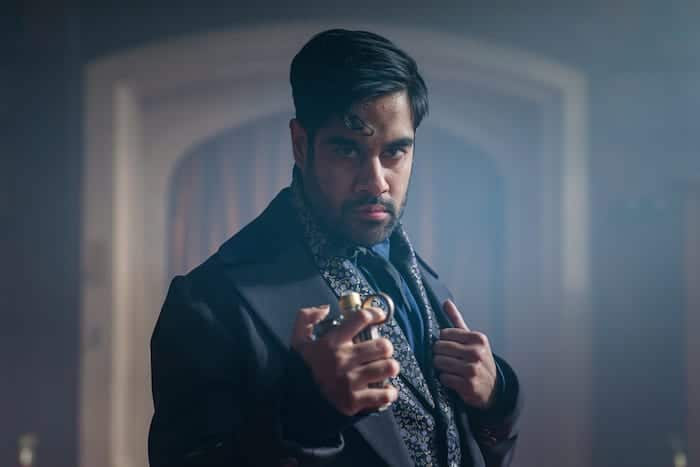 Born and raised in Bramhall, Manchester actor Sacha Dhawan has had something of a profile boost recently, thanks to being cast as The Master in Doctor Who.

He made his surprise first appearance in the first two episodes of the current season, playing opposite Jodie Whittaker as The Doctor, and he’s back for the season finale this weekend.

So how does it feel to be playing one of Doctor Who‘s most iconic villains?

“It’s amazing”, Sacha says. “To be the first British Indian playing The Master, it’s an incredible honour. I’m still trying to digest it all, to be honest.”

The character has previously been played by the likes of John Simm and Michelle Gomez. Did Sacha look at any past Masters for research?

“I’d seen some of John Simm’s portrayal years ago,” Sacha says, “and I quickly went on YouTube, but then I stopped, because I thought I’d just end up mimicking what he’s already done and that’s not really interesting.

“So I put all of that stuff away and decided to approach this like any other role, and just focus on what the series was bringing to the table and put my own stamp on it. Which is scary, because you’re never sure if people are going to like it.”

Sacha’s entertaining performance has certainly caught the attention of fans, and he quickly made the part his own.

“I was really interested in the fun element and the chaotic, kind of slight pantomime style for him, but also in making him quite dark, emotional and melancholic, which you’ll see a lot more of in the last episode,” he says.

“There’s so many different sides to him as well, which is really exciting to play.”

When asked about his own history with Doctor Who, Sacha has a confession to make.

“I watched bits, but it wasn’t something that I grew up watching. And in a way, I’m glad, because I would have been so overwhelmed by it all. I don’t think I would have done the job, to be honest – I would have put way too much pressure on myself. So I guess it’s freed me, not having seen too much of it.”

Thinking about childhood television watching habits prompts discussion of Sacha growing up in Bramhall. He clearly retains a lot of affection for his home town.

“It’s a beautiful village,” he says. “It’s where I went to school and it’s where some of my closest friends still live as well.

“It’s special to me because wherever I’m travelling, whether it’s New York or South Africa on Doctor Who or being in London filming for the last six months, when I go back to Bramhall, it grounds me to see my friends.

“In all honesty, work is important, but going home and having my roots in Bramhall is really important to me.”

That affection also extends to Manchester.

“It’s the city I grew up in, and it’s a city that’s constantly evolving. And of course, I love the people, so much. Everyone’s so grounded and friendly and they really support one another.

“It’s where my family live – I go back every couple of weeks, especially to the Northern Quarter. That area is particularly close to my heart as it’s where my mum and dad’s business originated from.”

In fact, Sacha credits the Northern Quarter with getting his first big break, the role of Akthar in the stage production of Alan Bennett’s The History Boys.

“I went to Aquinas College in Stockport, and after college, I said I’m going to focus on the acting. And then everything dried up completely! It meant that I had to work with my dad in the Northern Quarter.

“I didn’t know if I was going to be acting again, but I started writing and doing a lot of poetry performance in Manchester at a place called the Green Room Theatre.

“So, when I got the audition for The History Boys in London, I wrote this poem that I performed in my audition and I got the job. And on the day of the press night, Alan Bennett said: ‘I’m so glad you performed that poem, because that’s what got you the job’.

“And that job really changed my life, but it wouldn’t have happened if it hadn’t been for being in my dad’s clothing retail shop in Manchester, doing poetry performance.”

More recently, Sacha has been seen in various TV productions, including Line of Duty, Iron Fist, Last Tango in Halifax and Dracula.

“I’m weirdly connected with the Doctor Who universe, because Mark Gatiss wrote An Adventure in Space and Time, I worked with Mark then on Sherlock and then on Dracula.”

“Both Mark and Steven Moffat have been huge inspirations and helped me a lot with my career. They have always presented me with roles that challenge people’s perceptions and they think outside the box in regards to colour blind casting as well.”

Looking at the roles Sacha has played in Line of Duty, Iron Fist and Doctor Who, it’s impossible not to notice a certain theme. So what’s the appeal of the bad guys?

“I’ve been playing a lot of villains over the past couple of years”, Sacha says.

“I love playing villains because they’re always considered the bad guys, but for me they’re the more complex characters and there’s so many layers to play. I love the challenge of being the bad guy but getting the audience to sympathise with you as well, that’s when it becomes really interesting.”

Does that mean we can expect him to return as The Master?

“I’ve not been asked yet!” Sacha laughs. “I hope so. I hope this is the start of a longer journey, but we’ll just have to watch this space.

“I think my first thing was I just wanted the fans to like this incarnation, so if I get to be asked back, it’s an extra bonus. I’m just happy that right now the fans seem to be really supportive and liking what I’m doing.”

In the meantime, Sacha’s next project sounds like a must-see.

“I just finished filming a series for Hulu called The Great,” he says.

“It’s by Tony McNamara, who wrote The Favourite, it’s his new TV series. It’s about the rise of Catherine the Great, done in the Tony McNamara style, which is in essence period, but there’s also a real contemporary feel to it as well.”

The Doctor Who season finale is on Sunday 1st March, 6.50pm, BBC One.