The Bay Horse Tavern in Manchester’s Northern Quarter opened its doors for business this week.

This Thomas Street venue has been a Manchester institution since the Georgian era when the then Bay Horse Hotel was a popular place to drink with factory workers.

After the war,  rooms were often let to students for a small fee which included board and food. All very respectable, but less so when a seedier element arrived in the seventies in the form of strippers at lunchtimes.

The venue burnt to the ground in the 1990’s and it wasn’t until 2004 that the previous owners – of whom I was one – restored the pub to its former glory, or something along those lines.

Incorporating traditional boozer with some more eccentric and quirky traits, not to mention a big emphasis on music, the place was a hub for local creatives – something I was more than proud of.

But thirteen years later, with higher business rates, twenty percent VAT, early evening parking charges, an increasingly saturated market competing for their piece of the pie, happy hours, BOGOFs and so on and so forth, it was time for us to move on.

So, what’s changed? Well quite a lot, actually. Firstly they have a much bigger budget than we did to transform the venue which, admittedly, had started to look a bit tired over the last year or so.

It’s The Rovers Return meets Soho House – their words. A much more grown up gastro type pub, sophisticated with a touch of gents club thrown in – my words.

From the outside it’s deceptively similar. The beautiful Grade II listed exterior can’t be messed with that much, and the old police station signage remains. But the minute you walk in on those new fancy steps you can see the investment.

Look down you must, because some of the tiles and mosaic floors are stunning, and often steal the show.

The ground floor, in fact everywhere, is much darker. More polished for sure. Small cubby booths seem reminiscent of old style pubs, maybe the Rovers Return, although I can’t say for sure as I’ve not watched Corrie in a while.

The little darts room is a revelation – I wished we’d thought of it – as is the position of the new entrance to the beer garden, through the bar as opposed to through all of our back of house mess. Some fantastic ‘day of the dead’ artwork gives it a cheeky edge.

Downstairs is much more foody. An open kitchen with some intimate dining tables plus one large oval dining table for bigger groups. And some rather fine toilets – not just the rooms, but the facilities themselves, gloriously restored from some old knackers yard no doubt.

Putting emotions aside, I popped in to try the food. And drink, of course. 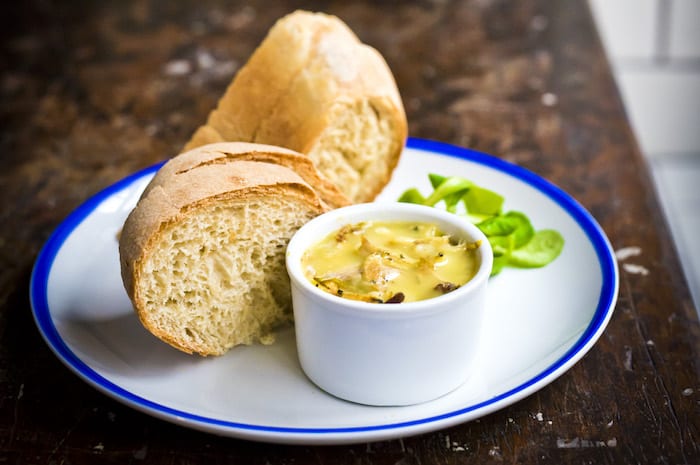 With the trend for small plate dining growing rapidly in the UK, diners are looking for a more social element to eating out. Unsurprising, therefore, that The Bay Horse Tavern serves up a number of classic British small plates.

Potted Beef on Toast (£5) is a revelation. I’ve only ever tried potted shrimp or ham. This was even better.

Think of the best salted beef sandwich and times by ten. It comes in a pot with the toast on the side, so the wording is a little misleading.  Likewise the Yorkshire Pudding with Chicken Liver (£4) which is actually a very smooth chicken liver pate with a yorkie, where toast would have worked better.

Prawn Cocktail (£6) does what it says on the tin, a very classic number with the addition of melon balls. Who doesn’t like a good ball? Ox Cheek on Toast (£6) was rich and meaty and delightfully good. 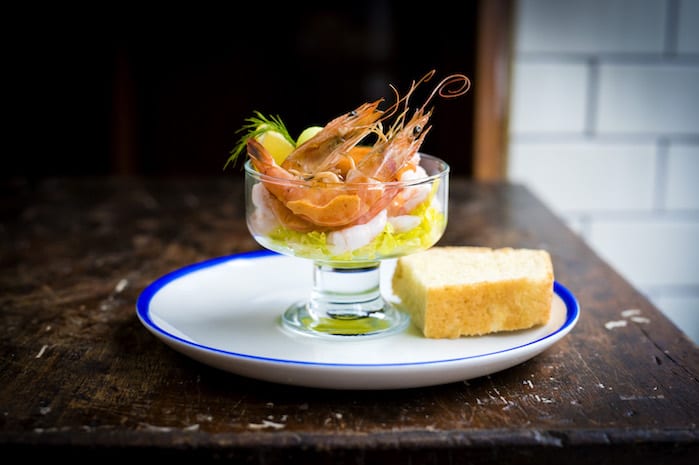 From the rotisserie we tried Ribeye of Beef (£11) and Suckling Pig (£12) both of which come with beef dripping chips – to die for, some of the best I’ve tried – and a great stocky gravy.

Ribeye of beef is succulent and comes medium rare, remaining juicy due to the cut with a little fat in the centre. Suckling pig is cooked to perfection, where it could so easily have been dry. There is a but: no crackling whatsoever, which for me is a cardinal sin.

You may be seeing a trend by now. This menu is highly carnivorous. So we decided to give the Mushroom & Leek Pie (£9) a try. Funnily enough, its big and meaty with a big fat spicy kick. Lovely, no short change there for the veggies.

We weren’t convinced by the side salad garnish and handful of vinegary crisps on the plate though. Put some of them beef dripping chips on the plate and it’s a win win. 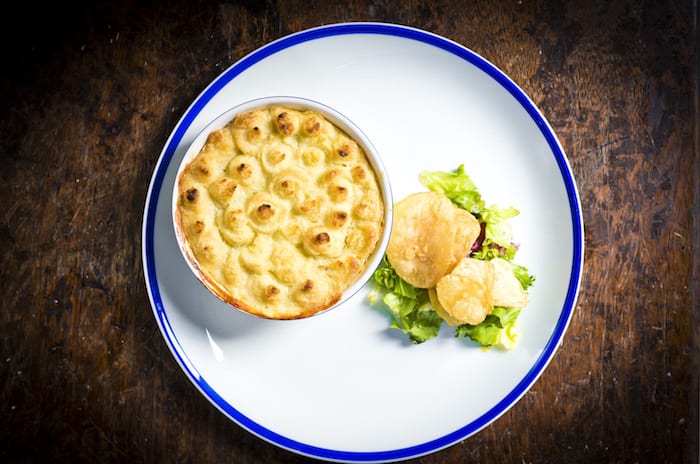 Drinkswise, we went for wine. It is absolutely fantastic that they are serving all wines by the glass. And we tried some crackers.

My baby may be gone, but there’s a new kid on the block now. The start of a new era. Cheers boys. You’ve done us proud.

The Bay Horse Tavern opens daily from 11am to 1am Sunday to Wednesday and to 2am Thursday to Saturday.