These days, when you think of pizza, you probably think of Neapolitan style thanks to its ubiquity in Manchester over the past decade or so.

But how much do you know about Romana style pizza?

We asked Mano a Bocca to tell us about what makes Romana pizza different, whether it’s in fact better than the Neapolitan counterpart – and why topping it with chicken causes a cherub to die.

Mano a Bocca brings the spirit and flavours of Rome to a beautiful waterside plaza in South Manchester. For owners William Moxey and Michael Baker, pizza is their passion.

“Our backgrounds are in Romana style pizzas,” says William.

“Neapolitan pizzas are not our expertise. When creating our concept, we wanted to specialise in what we knew best and shout about the style of pizza we favoured above all else.”

So, what’s the difference?

“Our 11” Romana pizzas have a very minimal edge, a thin base and with a crispness to it,” says William. “You can actually hear the crunch when you put a pizza wheel through it. It’s really distinctive.

“Neapolitan pizzas by contrast are soft, and the dough is quite thick as well.  Also, you have the cornicione, or rim.

“On a Romana pizza the rim is almost non-existent, whereas it’s quite big on a Neapolitan pizza one with those characteristic charred black spots. 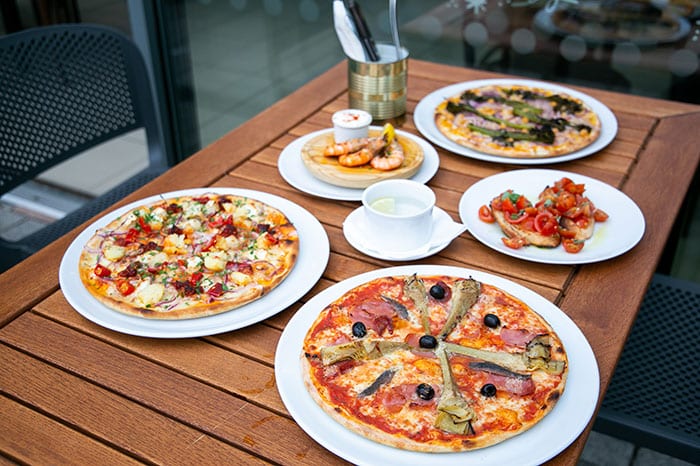 “Another major difference is that we include oil in our dough recipe. We don’t mess about here and only use the finest Italian extra virgin olive oil to create an exceptional product.  Both regional variations are made with flour, water, yeast and salt, but the addition of olive oil helps give the structure a little more weight, colour and flavour.

“And it allows you to stretch it a bit further to get that really thin base.”

In Naples, of course, pizza’s a serious business. Associazione Verace Pizza Napoletana (True Neapolitan Pizza Association) was founded in 1984 to promote and protect true Neapolitan pizza in Italy and worldwide. 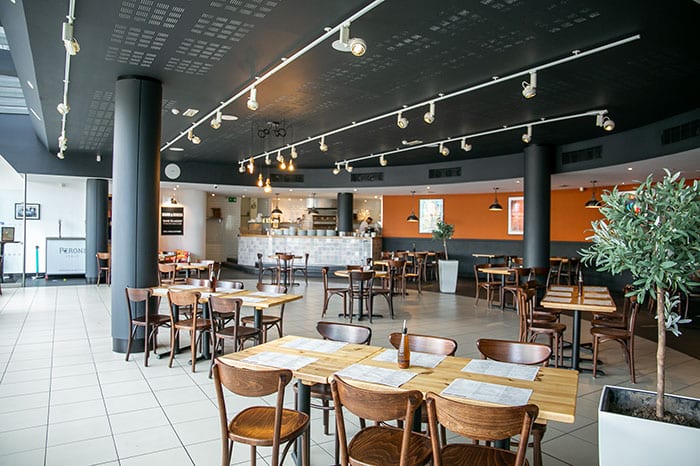 There are various rules, such as that the cooking must be done in a wood-fired oven at 430-480°C and takes just 60-90 seconds. Neapolitan pizzas, William jokes, are subject to “the pizza police”.

Romana pizzas, however, are cooked for slightly longer and at a lower temperature – at around 360° for five to six minutes – says William. And that also means you can experiment a bit more with the toppings.

“For example, one of our really popular pizzas is the Calabria, which has nduja sausage, red onions, chilies and potato as well as fior di latte and goats cheese,” says William.

“If you had that on a Neapolitan pizza, it would probably just slide into the middle and go all soupy.”

And that brings us to one of the main differences which you’ll notice immediately: how you actually eat the thing.

“Our name, Mano a Bocca, translates as hand to mouth – so we always say to people, that’s pretty much how you should be eating our pizza,” says William, who encourages customers to slice their pizza with a wheel and then pick it up rather than use a knife and fork.

“Because the base is thin and crispy, it will hold its shape. If you did that with a Neapolitan pizza, you’d end up wearing it.”

“It fits in so well with the vibe of our restaurant. Cool, laid-back. It’s not formal, there’s no tablecloths. It’s just really comfortable.” 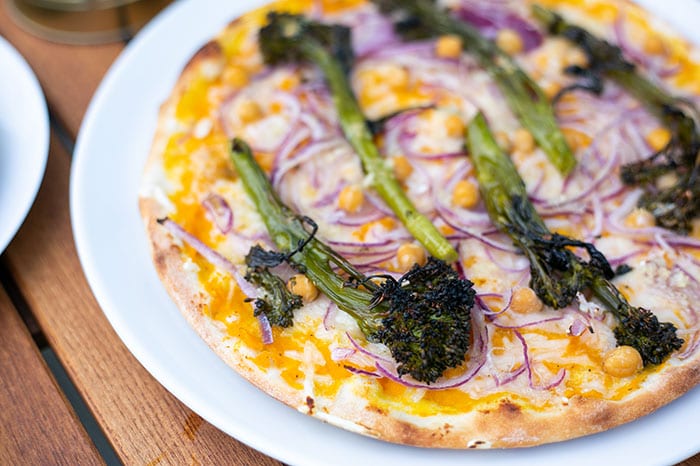 The Romana pizzas might seem more creative than their Neapolitan counterparts – but what are William’s thoughts on the ‘controversial’ pizza toppings? Do they have any pizzas with pineapple – or chicken?

“We draw the line at chicken. A couple of customers asked the question when we opened, but no, that’s not for us.

“Now, pineapple. We did some market research with my daughter and her friends when we were doing the children’s menu. We did say we’d be strict, and no pineapples would come into the restaurant.

“My daughter just loves a simple margherita, but three of her friends said their favourite was ham and pineapple. So, we didn’t really want to upset a whole young generation. So yeah, we have it on the kid’s menu, appropriately named Bocca Juniors – and if adults want to order it, then we allow it although a speedy trip to the confessional after is highly recommended.

“We always joke that one of the little cherubs in the Sistine chapel dies when somebody orders pineapple on an adult pizza. The Italians who work with us cross themselves. But yeah, we allow it.” 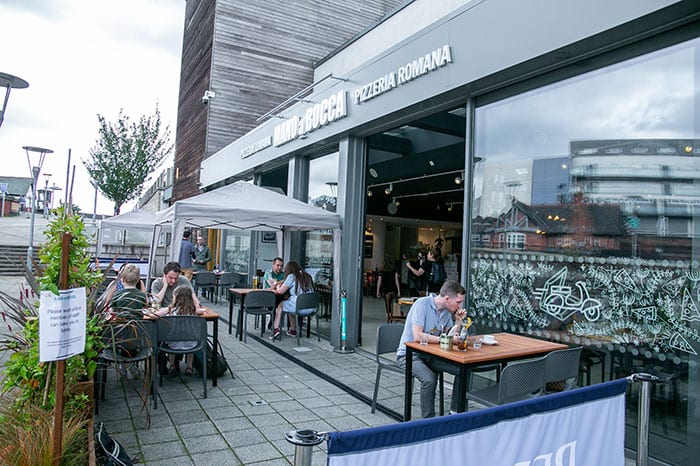 Mano a Bocca do serve some especially interesting pizzas amongst their 11-strong list, though, including a broccoli vegan pizza consisting of a butternut squash base topped with red onion and tenderstem broccoli which is cooked in chilli, with chickpeas, garlic and vegan mozzarella on top.

So, back to the ultimate question: is Romana pizza better than Neapolitan?

“Of course it is!” says William. “What else am I going to say? Hands down.

“They are both very good in their own right, but someone has to be the winner, I’m afraid. My heart is with Rome.

“And just to settle things further, Napoli have only won Serie A twice, whereas the capital city has five trophies to boast about… Okay, two from Lazio and three from Roma, but who cares..?”

You can try Mano a Bocca’s Romana style pizzas yourself at Waterside Plaza, Sale, M33 7BS