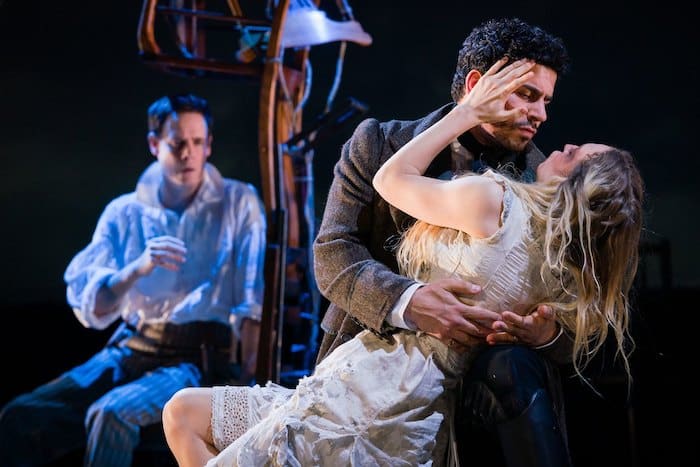 Emily Brontë’s beautiful yet harsh tale of love, obsession, revenge and redemption has been adapted for the stage and screen many times.

It is really difficult to get the tone right, as on one hand you have the infamous love story between Heathcliff and Cathy that most people remember, but you have to mix this with the grim biting winds of the Yorkshire Moors and the fact that the two lead characters cannot really be softened.

As soon as you do that, the essence of the story is gone.

For me, Andrea Arnold’s 2011 film version captures all of the above and more and avoids the Disney treatment or adaptations for a global market. It is ugly/beautiful. 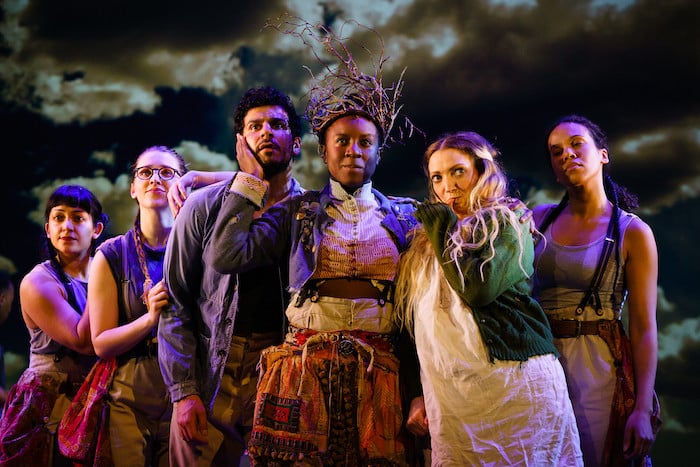 Emma Rice is the perfect director and adaptor for this new National Theatre co-production with Wise Children, Bristol Old Vic and York Theatre Royal. If you have seen her work on magic on the celebrated stage productions of Brief Encounter and Angela Carter’s Wise Children, you expect a celebration of a well-known text whilst playing fast and loose and the addition of madcap humour.

That’s exactly what you get here, and on the night I attended, there were many schools in attendance, waiting for the lines of text that they were studying. And they get that – it is represented in a way that someone studying the novel can follow with ease, but likewise, if you are new to the text, characters explain key plot points with a cheeky smile and great gags.

The story remains the same, as we follow Heathcliff who is rescued from the Liverpool docks as a child and adopted by the Earnshaw family. He is then taken to the infamous Wuthering Heights to live.

He develops a friendship with their daughter Catherine and the two of them connect via their love of the great outdoors. 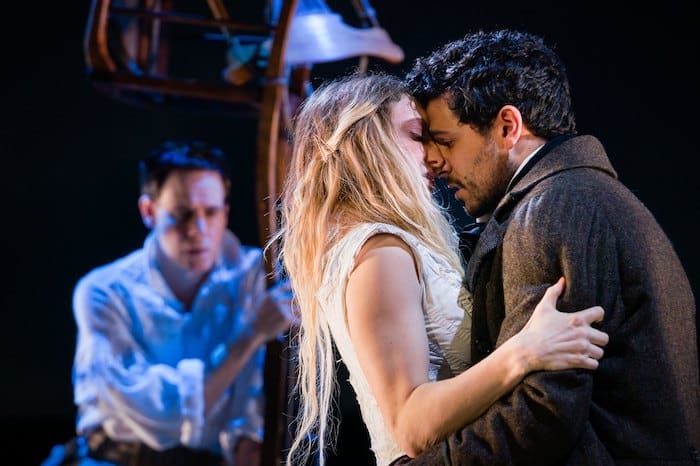 She is feisty and has a no nonsense attitude to life, and they fall in love.

But this is far from rose tinted. This is a fierce and ferocious love affair, filled with obstacles, and this new production presents this through a contemporary prism.

It explores passion, mental health and puts a spotlight on the selfless roles of women who were more than child bearers, but society wanted nothing more from them.

Emma Rice adds music and dance and the breaking of the fourth wall, and characters step out of the play text and converse with the audience.

This works incredibly well, and is so clever and knowing that during a musical sequence, one character says: “This isn’t very catchy, is it?” 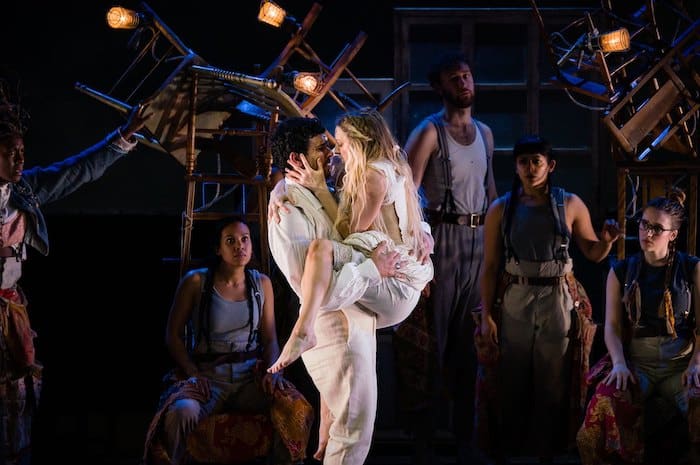 You are never far from something original and inspired.

If you have read the book or studied it, you will know that every time someone falls ill, what is coming next. In this production, the doctor knocks on the door following the birth of a child and you know that this is temporary happiness and so does the production.

There is one really funny scene which emerges from the darkness, where you see the doctor leave a house of death for the umpteenth time. He sits down and reaches for his hip flask and has a cheeky swig.

Emma Rice knows that if this is all represented as deeply earnest, a modern audience simply get the book and nothing else; she gives you so much more.

Cathy (played with fiery passion and a lust for life by Lucy McCormack) delivers a rock number and at the end she literally drops the mic. It is moments like this that leave you beaming.

McCormack is never off stage and her Cathy is complex, wild and at times unhinged. She flies around the stage like a firework and really highlights the lack of support that women received. 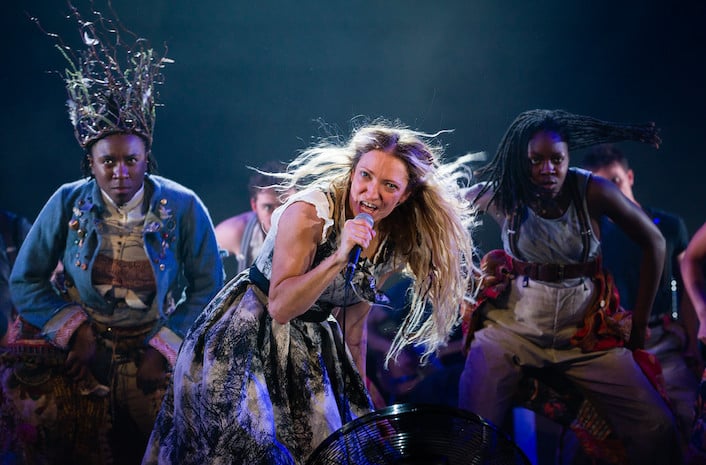 Liam Tamne’s Heathcliff is stoic, cold, yet haunted by his past and equally obsessed. He delivers the song and dance elements really well, and it’s no surprise as he has not long finished performing in the epic musical production of The Prince of Egypt in the West End.

Katy Owen steals many scenes alternating between the roles of Isabella Linton and her son Linton Heathcliff. She transforms herself with no make-up, it is all down to physicality, and the effects are not only funny but also quite remarkable.

The audience love this performance and you can hear the buzz whenever this gifted performer steps onto the stage.

The supporting cast members are all excellent and his generous production gives all of them a chance to shine. 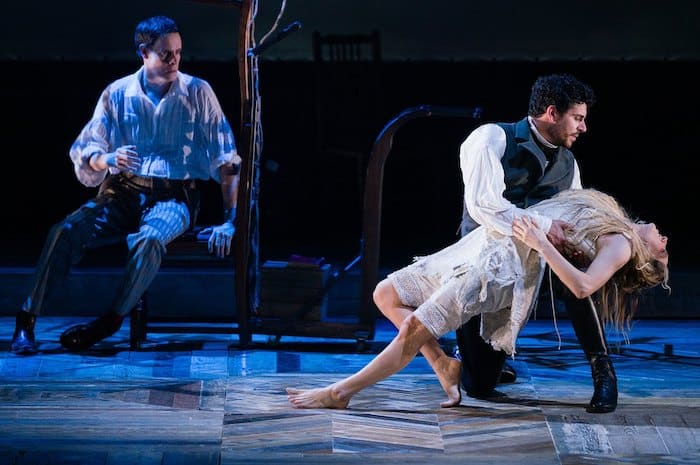 Etta Murfitt’s movement and choreography does more than cover set changes, it brings the text to life, alongside Jai Morjaria’s striking lighting which puts a spotlight on all aspects of the representation.

The songs are witty and have a warmth about them which contrasts beautifully with the gritty and earthy text. There are too many musical numbers though, which does mean the run time is stretched to the limit at almost three hours.

I am a huge Kate Bush fan and for me, this epic production reflects the high quality and themes of her celebrated take on Heathcliff, Cathy and the moors: “How could you leave me when I need to possess you? I hated you, I loved you, too.”

Emma Rice’s production of Wuthering Heights is so inventive, funny and inviting to both newcomers and lovers of Emily Brontë’s bold and beautiful book, that I guarantee you, that like me you will become obsessed with it.

Wuthering Heights is at The Lowry until 7th May and you can book tickets here.