Review: The Woman in Black is a truly terrifying theatrical experience

One of the West End’s longest ever running shows, the chilling ghost story has come to Manchester - and it still has the power to shock 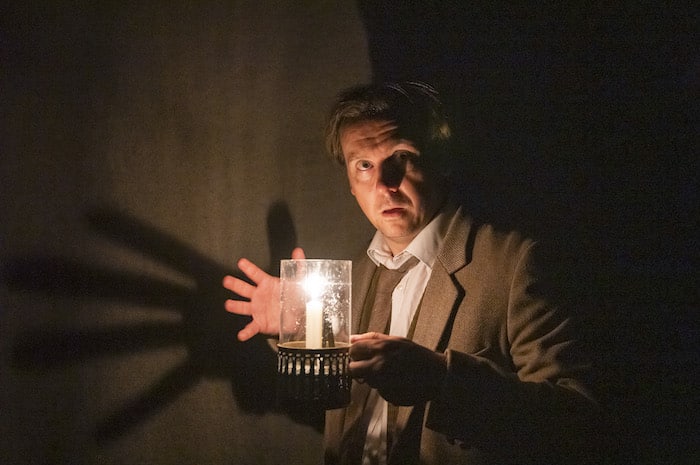 From classic campfire tales passed down through the ages to modern horror films, we all love a ghost story.

According to many literary critics, a ‘Golden Age’ of the ghost story existed between the decline of the Gothic novel in the 1830s and the start of the First World War – and M.R James is arguably the master.

A Jamesian tale often involves a characterful setting in an English village, seaside town or country estate, with a gentleman-scholar as protagonist and the unwelcome attention of a supernatural menace, a malevolent presence which becomes increasingly insistent.

One of the most famous modern ghost stories thanks to its hugely successful stage and film adaptations, Susan Hill’s 1983 novel The Woman in Black is a worthy addition to the canon – and it’s lost none of its shocking Gothic power over the years.

Performed in the West End of London since 1989, the stage adaptation was written by Stephen Mallatratt in 1987, adding the framing device of a play-within-a-play.

One of the West End’s longest ever running shows, seen by more than seven million people, The Woman in Black combines the power and intensity of live theatre with a cinematic quality inspired by the world of film noir.

And now, you can see it at the Palace Theatre, Manchester as part of a UK tour.

Written for two actors, who convey the entire tale through the use of simple set items and props, the appearance of the Woman in Black herself makes this one of the most terrifying pieces of theatre you are ever likely to see.

The story begins in an empty Victorian theatre, when lawyer Arthur Kipps engages a sceptical young actor to help him tell his terrifying story and exorcise the fear that grips his soul.

They agree to perform the story, with the Actor playing a younger Arthur Kipps, and Arthur himself playing all the other characters and narrating the play.

Young Arthur learns of the death of an elderly and reclusive widow, Mrs Alice Drablow, and travels to Eel Marsh House “with its eerie marshes, sudden fogs and moaning winds” in the small market town of Crythin Gifford in the north of England to sort through her papers.

At Mrs Drablow’s funeral, he meets Mr Horatio Jerome, a local man enlisted to help him – and this is where Arthur first sees the spectral Woman in Black. He asks who she is, and Mr Jerome, visibly terrified, hurries Arthur away from the church, insisting that there was no woman.

As Arthur tries to solve the mystery of the ghostly figure who appears to haunt Eel Marsh House, we delve further into his darkest memories of unnerving events involve dead children, fog, quicksand and a haunted nursery.

The borders between make believe and reality begin to blur, and the flesh begins to creep…

The set is sparse. A props basket serves as a pony and trap and as the furniture for a house or office. This is not about dazzling special effects – it’s all about imagination.

Fear is built layer by layer via simple surprises – a creaking rocking chair, a sinister shadow, a locked door, descending fog – but we also see the terror on an actor’s face, and it’s contagious.

The Victorian theatre setting and the characters’ use of the auditorium amplifies the chills, making us feel part of the action – or at the very least uneasy voyeurs.

The nerve-shredding effects of the production are enhanced by the clever use of sound and lighting to create a sinister atmosphere and keep the audience on edge until the final horror of the legacy of the Woman in Black is revealed.

But be warned – some of the most chilling sounds of all are the gasps and shrieks which come from the increasingly jumpy theatre audience.

You may need to sleep with the lights on after seeing this terrifying tale.

The Woman in Black is at the Palace Theatre until Saturday 28th August. Tickets start form £13 and are available here.