Review: We Will Rock You turns the songs of Queen into a musical unlike any other 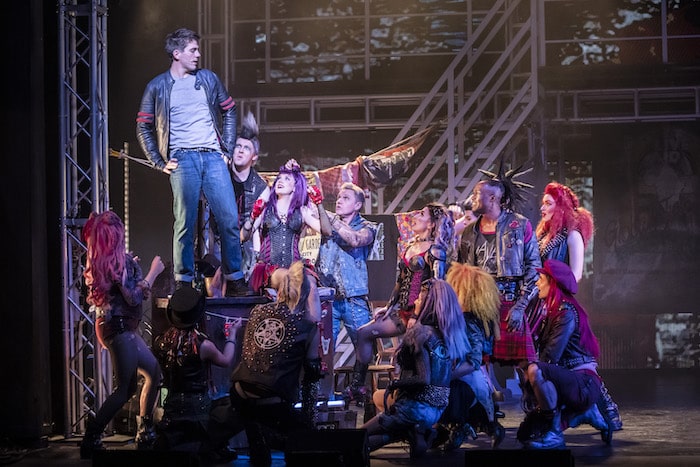 We Will Rock You, rocks into Manchester Palace Theatre in style with a musical that combines the greatest hits of Queen, lots of laughs and amazing performances with an original story of how, when it comes to rock and roll, the show will always go on.

It is set in a dystopian future where Earth has become the iPlanet, all music is mass produced and humanity is controlled by the soulless Globalsoft Corporation. The stars of the show are Galileo Figaro (played by Damien Walsh) a dreamer haunted by memories of songs from a past he can’t explain and Scaramouche (Elena Skye) a quick-witted outcast trying to find her place in the world.

The plot follows the duo as they team up with the rebel Bohemians led by Sir Cliff (Michael McKell) in search of the mythical ‘Rhapsody’ that they hope will free them from the tyrannical rule of the Killer Queen (Jenny O’Leary) and her villainous second in command Khashoggi (Adam Strong) and bring back the music of rock and roll. While the outlandish plot may sound at first like an old Sci-Fi B-Movie, the strength of the characters, the performances and choreography combine to make We Will Rock You nothing short of an A star show.

The strength of Ben Elton’s direction and writing are clear for all to see and when paired with the amazing chemistry of the cast and the songs of Queen, everything fits together seamlessly to bring audiences a musical unlike any other. Scaramouche and Galileo make for fun and likeable protagonists and both Skye and Walsh deliver incredible vocal performances such as “I Want to Break Free”, “Somebody to Love” and “Who Wants to Live Forever” and both actors play off each other brilliantly that really gets the audience invested in their journey.

Opposite the heroes, Jenny O’Leary’s dominating performance as Killer Queen brings a unique brand of villainy to the stage and coupled with the equally excellent Adam Strong as the flamboyantly devilish Khashoggi. The duo make fun yet threatening villains for the audience to root against as they bring as they match the heroes in singing ability, as they take songs such as “A Kind of Magic” and “Don’t Stop Me Now” and give them a villainous reimagining.

Another strength of the show is the use of comedy, with countless jokes to keep the audience laughing between the songs. All cast members get a chance to show off their comedic talents and Michael McKell shines as the rebel leader Sir Cliff who never fails to bring the laughs and demonstrates his great use of comic timing and humour that is always welcome on stage.

Also notable are the characters of Brit (Edward Leigh) and Meat (Martina Ciabatti Mennell), two rebel bohemians who are only given a short time to endear themselves to the audience compared to the rest of the cast, but manage to do so with ease. Both actors shine in the time they are given with great performances of “I Want it All” and “No One But You (Only the Good Die Young)”.

The set design (by Tim Blazdell) is superb and brings the sci-fi futuristic earth to life along with the ensemble cast of dancers who don many different outfits (designed by Kentaur) in each scene. But they always give the same high level of performance throughout with expert choreography that keeps the show vibrant and takes things to another level when accompanied by the fantastic live band (Musical Dir. Zach Flis, James Barber, Simon Croft, Neil Murray, Dave Cottrell) bringing the audience a musical performance worthy of Wembley Stadium.

With grade A singing, dancing, laughs and legendary songs We Will Rock You delivers on its titular promise and delivers a fantastic rock and roll show for the ages.

Tickets can be booked HERE.