Review: Waitress is as welcome as a hot cup of coffee on a cold November morning

This show is big but bold enough to feel small, filled with great truthful performances and original and hummable songs 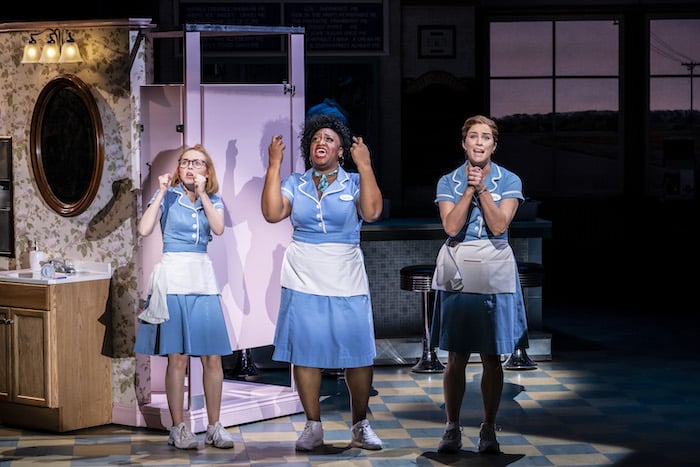 Waitress began life as a low budget film written and directed by the late Adrienne Shelly, and she also starred in the movie in a supporting role as ditzy sidekick Dawn.

Five years ago, like many films, the show was adapted into a stage musical on Broadway and eventually arrived in the West End, where it gained many lovers and some haters.

Manchester audiences can now have a chance to see why this charming musical set in a diner is as welcome as a big hot steaming cup of coffee on a cold November morning.

The wonderful Lucie Jones plays Jenna, the lead, who enjoys making themed pies (each one has a story) in her local diner whilst waiting tables with her two pals Becky (Sandra Marvin) and Dawn (Evelyn Hopkins) as it helps her escape from her relentless home life with her abusive husband Earl (Tamlyn Henderson).

Her two friends have their own back stories, too.

Following her shifts, feisty and funny Becky is caring for her husband, and we realise, behind the mask, is someone who just wants to be loved and have fun.

And shy and socially awkward Dawn is about to step into the unknown by going on some dates.

These three pals share laughter, ponder the ways of the world they find themselves in, serve pie and listen to the stories that many of their customers bring to the popular diner, including grumpy but kind and caring regular Joe (played by Michael Starke).

As if Jenna has not got enough to contend with, she finds that there is something else in the oven – a bun – when she finds out she is pregnant.

Cue quirky and socially awkward Dr. Pomatter (Matt Jay-Willis), a new doctor in town, and Jenna has a male to confide in and talk to, something she is not used to, given her husband’s lack of empathy and understanding beyond his empty beer bottles.

Writer Jessie Nelson has managed to capture the spirit of the original film version, and because it is a little seen movie, there is no need to slavishly reproduce it scene by scene – and this is really refreshing.

Likewise, the fact that this show does not ‘put another dime in the jukebox, baby’ and chooses not to play you hits from yesterday one after the other is also a real plus.

Sara Bareilles is a songwriter who puts everything out there in a five-minute song, and the country/folk/pop feel of each beautiful number gives these characters more life and an inner voice.

You also get to experience full on emotion with the likes of She Used to Be Mine and slapstick comedy with Bad Idea, which has Keith Urban vibes running through it.

Scott Pask’s effective set design gives the show a cosy and welcoming feel, as we enter the diner and feel as if we are sat there, eavesdropping.

The Waitress Band sit in the diner behind the piano, almost hidden by the many pies that adorn the stage, and I wish this aspect was more visual and immersive – in a similar way to the hit show Once – as they play beautifully.

Lorin Latarro’s choreography is subtle and smooth and totally suits the soulful music and lush lyrics.

Lucie Jones has country tinge to her voice and when she hits the high notes, she does so with momentum, and it really is quite something to hear a performer who does not lay it on table all at once.

Her vocals are superbly controlled which means when she does go for it, you are left teary eyed.

Sandra Marvin imbues Becky with comedy and sassiness, but we know something is missing for her character and you can see it behind her eyes. She flexes her comedic muscles, too, and she has the audience in hysterics.

If you have seen her in a musical before, you know what a powerful voice she has. I just wish Becky had a couple more solo numbers, so you could hear her soar more.

Evelyn Hopkins and George Crawford are a fascinating double act as they take what could be seen as stereotypes, a cute and cut-off-socially couple (Dawn and Ogie), and give them heart and genuine kindness.

Tamlyn Henderson has a tough job as Earl is written as unlikeable and unpredictable, but he knows this role inside out having played it before in London, and he brings out the humour from his character’s ignorance.

Matt Jay-Willis is excellent as the new doctor in town, he has great comic timing and knows that sometimes the secret to great comedy acting is not to go full on wacky but to wait and leave the audience with the pauses.

It is a credit to director Diane Paulus, as this is a big show, but these small and intimate moments really work and make you feel good.

Michael Starke’s Joe is vital to this piece, as he is the outsider looking in and he is superb at showing you what’s behind the grumpiness of a local who likes his food cooked a certain way.

He has genuine chemistry with Lucie Jones and their scenes are incredibly memorable.

The ensemble are all excellent and Scarlet Gabriel brings every single punchline to life in a very small roles as Nurse Norma.

Somebody give her a leading role – please.

The first half zips by and the second half of the show packs in even more drama and sometimes over-eggs the pudding, so you feel a bit stuffed and feeling that you have had too much pie.

It would benefit from some short crust pastry and a little less filling, as it is a show that does not know when to say, “Can I have the cheque please?”

But, if you looking to escape and you long for a show which is big but bold enough to feel small, filled with great truthful performances and original and hummable songs with marvellous melodies, then get yourself down to the Opera House and book a table, and a waitress will be right with ya.

Waitress is at the Manchester Opera House until 20th November. Tickets are available here.