Review: The Mountaintop is powerful, insightful and wickedly funny 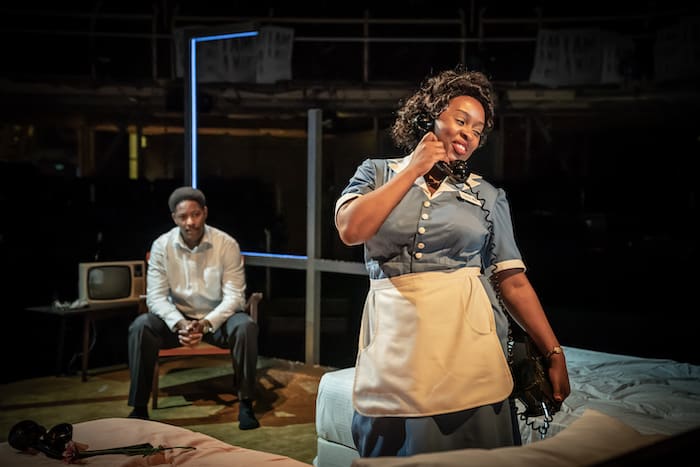 Dr. Martin Luther King Jr has just given his speech, I’ve Been to the Mountaintop, where he declared, “We’ve got to give ourselves to this struggle until the end. Nothing would be more tragic than to stop at this point in Memphis. We’ve got to see it through.”

In Room 306 of the Lorraine Motel, Memphis, Tennessee, after giving what would be his final galvanising speech, Dr. King is forced to confront himself as his hopes and dreams are picked apart by Camae, a young, attractive, foul-mouthed maid who brings him a cup of coffee, with a dollop of whiskey in it, on a tray of unflinching honesty.

So begins Katori Hall’s Olivier Award-winning play The Mountaintop, a new production with Ntombizodwa Ndlovu as Camae and Adetomiwa Edun as Dr. King.

An intimate look into the quieter moments of King’s life, The Mountaintop chips away at the myth of the great man to expose his fears about his family, his country and the ever-looming threat of a violent death.

Set during the height of America’s Civil Rights Movement, Katori Hall’s sharp and powerful play confronts the legend and his legacy.

Are we really free or do we live in a world of false liberation?

Ntombizodwa Ndlovu, a Zimbabwean-British actress, singer and recent graduate from the Manchester School of Theatre, throws herself fully into the role of Camae, the mysterious and beautiful maid who strikes King’s attention immediately.

The conversation focuses on the fight for civil rights – and reaches a climax when Camae reveals her true intentions for walking into King’s motel room that night.

Race and class, gender and politics, leadership and responsibility are placed unapologetically under a sharply focused lens.

The play is also laugh-out-loud funny in parts, and works beautifully in the intimate, democratic, theatre in-the-round space of the Royal Exchange .

In 2021, as we wrestle with so much uncertainty, The Mountaintop is perhaps more revelatory than ever before.

The Mountaintop runs from until 27th October 2021 at the Royal Exchange Theatre. Tickets are available here.