Review: The Commitments at The Palace Theatre, Manchester 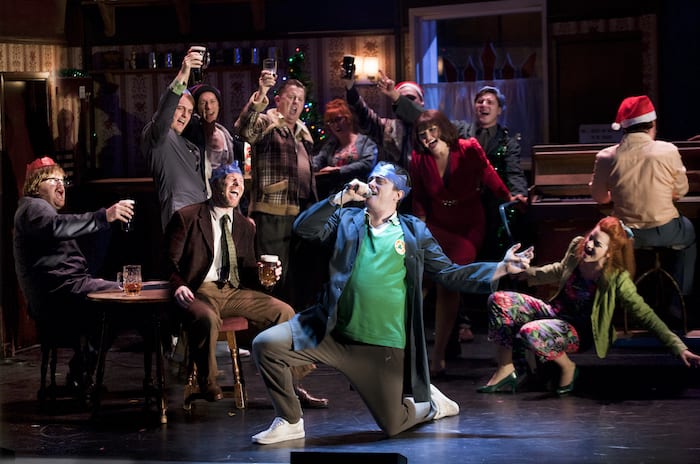 The Commitments, Alan Parker’s 1991 film based on Roddy Doyle’s novella of the same name, was a huge hit. Even people who didn’t see the BAFTA award-winning film could be brought to their feet and busting some moves when Mustang Sally started playing. It’s been adapted into a stage musical which has received widespread praise during its two year run in the West End, and has now arrived in Manchester.

In case you haven’t seen the film, it’s a wonderful story of fame, failure, relationships and soul. Jimmy Rabbitte (played brilliantly by Andrew Linnie) decides to form an R&B group in his neighbourhood in north Dublin. Although the band is incredibly talented, tensions run high between them and the pressure of success sees cracks forming in their relationships.

The tale gets increasingly tangled up – and hilarious – as the band starts to fall apart just as it’s about to take off. All of the girls, at some point or another, have a romantic attachment to middle-aged horn legend Joey ‘The Lips’ Fagan (Alex McMorran) – obviously not the key to forming an amicable trio of soul sisters. And none of the band ever really warm to the lead singer Deco, the main protagonist, portrayed flawlessly by Brian Gilligan.

Deco’s the guy you love to hate, a narcissist and prize wanker. He has some hilariously aggravating lines, an incredible set of lungs, an awesome singing voice and a hysterical strip scene. What more does an audience need?

Sam Fordham’s skinheaded, quick-tempered Mickah – the band’s security – also provides moments of mirth with his hilariously thuggish attitude. The way he strides across a room and jerks his head is just genius.

Although the story’s main focus is the ups and downs of the group in their scramble for success, the show as a whole is so much more. With jazzy songs, spirited dancing, comedy and romance, the production is an absolute hoot. It even includes audience participation, such as when we become the audience at a Commitments concert. These moments are well judged and fabulous. I felt like I’d just been to the best gig of my life hosted with humour and passion by Jimmy.

The whole cast is of an amazingly high calibre. From Kevin Kennedy (who you might remember as Curly Watts from Coronation Street) as Jimmy’s hilarious and cutting but soft hearted Da to Leah Penston as the sexy and sassy Imelda, every performance is strong and soulful.

All three lead females have beautiful singing voices and radiate a glitzy charm. And even singing out of tune is a big hit in this production. Jimmy’s lovely little performance of Mr Pitiful with the adorable James (Rhys Whitfield) on piano, is very touching despite the fact that ‘he can’t feckin’ sing’.

This production is fabulously fun and a joy to watch. It’s got something for everyone and the music is sublime. Although the songs are from another era, they’re as fresh and funky as though they were written yesterday. A wonderful story with fantastic actors, it will make you want to visit Dublin … about 40 years ago.

Once it’s finished its run in Manchester, it continues on its UK tour. So do go and see it if you can. It really is a must-see.

The Commitments is at The Palace Theatre until April 8th.