I have this theory that the art of cooking was invented by the poor. However precious we get about cheffing these days, it all started as a means of making a little go a long way.

When the Merry Monarch was taking huge bites out of plump chicken legs and chucking the bones over his shoulder, as memorably portrayed by Charles Laughton in Alexander Korda’s The Private Life of Henry VIII – catch it on YouTube – the peasantry had to make one rabbit feed the entire village, thus inventing the stew. In Italy pasta still makes miniscule bits of meat and fish go a long way, as does the cassoulet in France.

Today foodies scoff that Americans have no cooking skills. But why should they in a land of plenty? Just look at the size of their steaks. The point is, when you have such ingredients in plentiful supply, why bother messing them about? 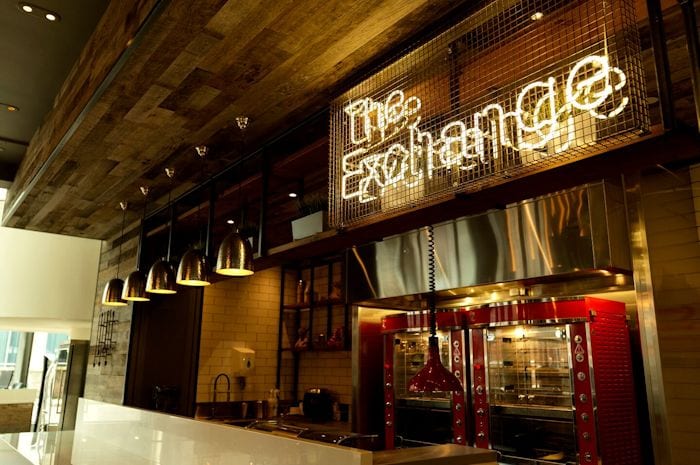 Which brings me back to chicken. When I was a kid it was a luxury and tasted like chicken. These days we’ve become blasé about chicken, and no wonder, because most of the factory birds in the supermarket are so bland and flavourless you have to drown them in a curry, cover them in the Colonel’s spicy coating or stuff them with garlic, a la Kiev, to make them taste of anything.

So hats off to Manchester’s Store Street Exchange. They’ve made simple roast chicken the centrepiece of their recently-launched Sunday lunch menu. It’s chicken like it used to taste. Free range and corn fed by poultry masters Reg Johnson and Bud Swarbrick at Swainson House Farm in Goosnargh in the Ribble Valley and served hot off the rotisserie. These  birds have been championed for years by local Michelin heroes Paul Heathcote and Nigel Howarth.

The restaurant sits alongside the Store Street Craft Bar on the ground floor of the Doubletree by Hilton Hotel, just across the way from Piccadilly Station approach. It’s a no nonsense, functional, vaguely industrial space with solid, unclad wooden tables arranged free standing and in booths surrounding a central bar.

The Sunday lunch menu – available from noon to 6pm, which is stretching the definition of lunch, but hey, it’s Sunday – comprises a choice of three starters, a quartet of mains and a trio of desserts. Main courses are £12.95, two courses are £15.95 and you get all three for £18.95, which turned out to be amazing value for the quality on offer. 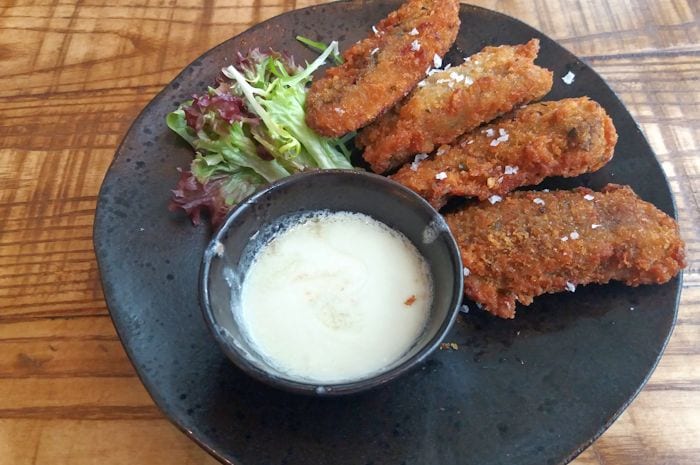 I started with herb-crusted Portobello fries – basically thick slices of Portobello mushrooms deep fried in a crunchy coating – a contrasting combination of textures, served with a tangy Harrogate Blue cheese dip. A simple, satisfying  variation on a familiar theme.

Mrs K had a “mini” chicken Caesar – if not maxi, then certainly midi – which ticked all the boxes in terms of freshness and flavour with crunchy croutons, sliced garlic and shaved Parmesan, creamy sauce and a first taste of Reg & Bud’s legendary chicken.

For the main course I chose the chicken, the house speciality since the restaurant was launched last year. Mrs K had the roast of the day – leg of lamb. 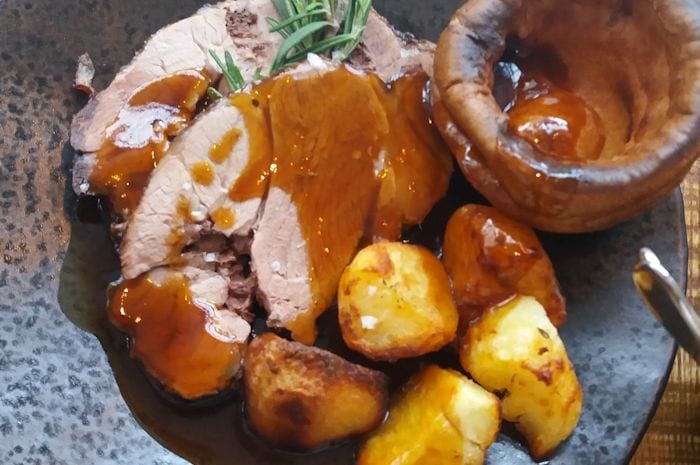 I got half a chicken on the bone, it’s skin crisp, perfectly seasoned and a glorious golden colour. It was so huge that I slipped part of its plump breast into a doggy bag. The texture was soft and melting, the cooking spot-on, the flavour evoked memories of old. Excellent.

The attention to detail with the trimmings was gratifying too. The carrots sweet from the honey and al dente. The steamed greens – including French beans, Savoy cabbage and Brussels sprouts – as fresh as you like. The roasties just so and the gravy seriously good. The Yorkshires? Its a moot point whether they should have been there at all. We thought them a tad over crisp and unnecessary. They certainly wouldn’t have gone with the alternative mains, fillet of salmon with new potatoes and lemon butter sauce or roast vegetable pithivier, but that’s a minor issue. 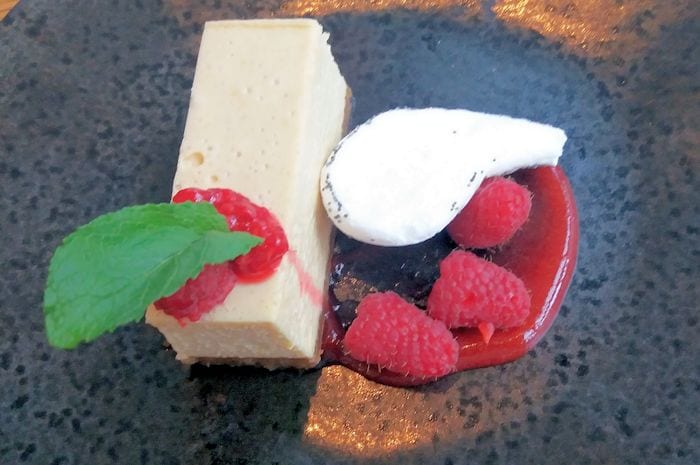 Both puddings were a delight. Lemon and mascarpone cheesecake, the citrus balancing the sweetness, came with fresh raspberries, and my apple crumble’s generous fruit delivered a lovely hit of cinnamon beneath the perfect crumb topping.

All excellent value, as was the wine – Finca Valero Macabeo 2016, a fresh and crisp white with notes of apple and peach from the upcoming Carinena region in Spain’s Aragon, was a modest £19.