This production of Passion – a lesser known Stephen Sondheim musical, and book by James Lapine – is adapted from the 1981 Italian film Passione D’Amore by Ettore Scola, which itself was adapted from the fairly obscure 19th century novel Fosca by Iginio Ugo Tarchetti.

Directed by Michael Strassen, the story centres around a young Captain Giorgio, played by Dean John-Wilson (Aladdin), who, upon being transferred to a remote garrison away from his young, married lover Clara, played by Kelly Price (What’s New Pussycat), begins to question the nature of his ‘conditional’ love for her.

In this new post he encounters the ailing and troubled Fosca – an older woman and cousin to his commanding officer, played by Olivier award winner Ruthie Henshall (Billy Elliot), who quickly becomes infatuated with him. 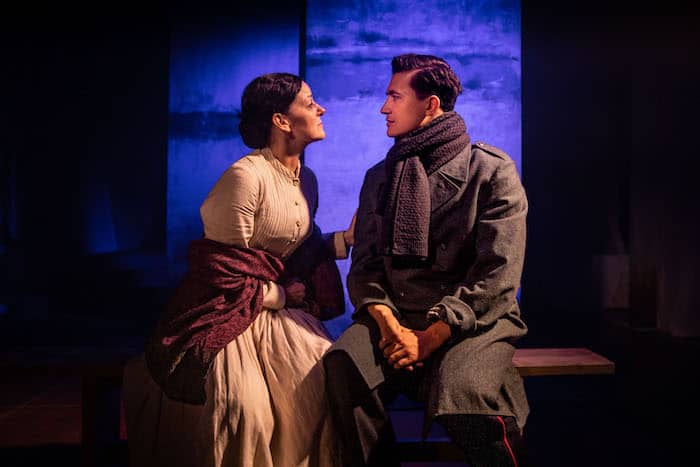 Although at first he rejects her advances, over time he comes to realise that love doesn’t always present itself in the most obvious forms, and that her obsession speaks to a truer, more unconditional love.

This less traditional love triangle dynamic is set to the backdrop of a military barracks, and as such, features a boisterous band of brothers-in-arms who add a little humour to the mix throughout.

This supporting cast – in particular, Ray Shell as the meddlesome, but well-meaning Doctor Tambourri, and Steve Watts and Juan Jackson as the vociferously opinionated Major Rizzolli and Lieutenant Barri respectively, add some balance to what would otherwise be an all too melancholic affair.

Being a Sondheim production, the big draw of course will always be the musical numbers, and they are delivered with gusto by all, bar none.

Pitch-perfect and powerful throughout, you are left with no doubt that each and every cast member is a seasoned pro, with the pipes to match their immense experience in the musical genre.

Accompanied by an accomplished band under the musical direction of Yshani Perinpanayagam, the musical numbers are fantastically orchestrated and are a treat for the ears throughout as they ring resoundingly throughout the tight confines of the Hope Mill Theatre.

On the venue itself… It is a cosy setup, to be sure, with the audience mere feet from the action in the front row, and packed in quite tightly.

The stage itself is also very small, necessitating an extremely economic and creative approach to the use of its limited space by movement director, Sundeep Saini, and set designer, Elin Steele.

It is remarkable, the sense of the different locations that is evoked – especially with such seamless fluidity, that allows the production to glide from one scene to the next expertly.

It feels like a production that would benefit further from a larger stage, however, and I feel that the conclusion is less resonant than is intended, with the hurried shuffling from one scene to the next resulting in a slightly unconvincing emotional payoff.

Perhaps it is more to do with the fact that it is one of Sondheim’s lesser known musicals for good reason, but as a ‘passion’ project (apologies) in honour of the late great composer, who died last year, it serves as a thought-provoking and unorthodox love story thats uniqueness is its strength.

With tickets starting from £28, up to £38.50 for the front rows, it is rather steep; especially considering the humble and frankly cramped seating arrangement, but with a runtime of just over two hours and with such A-grade talent on display – both on and off-stage – you won’t leave disappointed.

Passion is at Hope Mill Theatre until 5th June 2022. Tickets are available here.