LGBT+ stories are very rarely written and performed by LGBT+ people; let alone in such a variety of genres

OutStageUs is exactly what it promises to be and more: a vivid anthology of LGBT+ stories told by and for, LGBT+ people.

Each of the eleven pieces represents a different aspect of growing up and existing as an LGBT+ person. From navigating pronouns in the workplace, as seen in They, (written by Alice Hancock, directed by Chris Hoyle and performed by Georgia Frost and Kelsea Knox) and Taking Stock (written by Lydia Brickland, directed by Mike Lee and performed by Alan Cammish) the inherent competition of karaoke on a hen night and the joy of finding your chosen family.

Despite being entirely separate, every story feels connected due to the warm way it is told. grounded in humanity and it is clear they all come from lived experience.

The transitions between each story are seamless and every aspect of OutStageUs is clearly extremely well rehearsed.

OutStageUs opens with Behind Enemy Lines, (written by Bobby Warner and directed by Chris Hoyle, performed by Patrick Price, Sebastian Emmerson and Matthew Forey) the story of two friends reconnecting in the bedroom of a Conservative MP after one spends the night and one break in through the window. This story is as eerily timeless as it is farcical, in a way that leaves the viewer wondering just how much the political climate in the UK for LGBT+ people has changed since the 1980s.

Similarly, Birthday Waltz (written by Paul Fairweather, directed by Adam Zane, choreographed by Lisa Heywood, and performed by Patrick Price, Simon Goodchild and Jacob Butler) is a story grounded in the past, as a sixty-year-old gay man reflects on his life and all he’s experienced. From helping friends sew sequins onto their Pride outfits, to nursing them as they died of AIDS. This character takes stock of all he has lost and all he has gained in the last sixty years. It recounts history with bittersweet nostalgia, but still feels accessible to a younger audience.

Stories like Guy Lines (written by Robert Holtom, directed by Adam Zane, performed by Simon Castle and Jacob Butler) and Boxers and Soxers (written by James McDermott, directed by Adam Zane and performed by Joey Ethan and Simon Castle) each explore how homosexuality can intersect with toxic masculinity and the importance of allowing yourself time to figure things out as a young LGBT+ person. 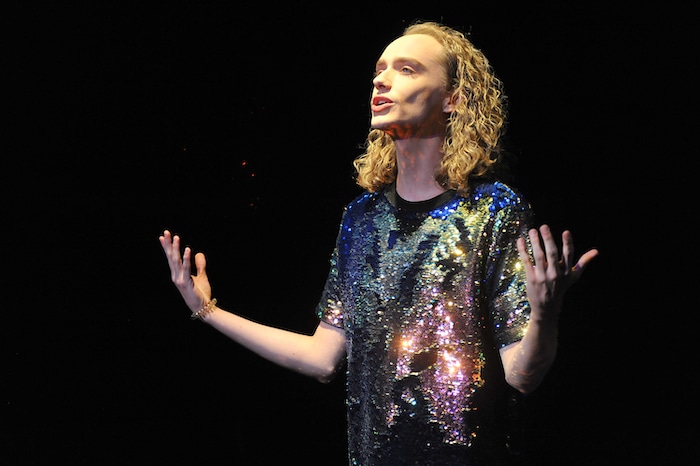 Spark (written by Caitlin Magnall-Kearns, directed by, Chris Hoyle, and performed by Ralph Bogard and Sam Goodchild) is a loose retelling of Pride and Prejudice, told against the backdrop of a hen night, where two gay men meet as friends of the bride, each convinced they have nothing in common. Despite being told in separate monologues, the character growth is so satisfying and the chemistry the two actors share is wonderful.

Fanny’s Your Aunt (written by Bob Leaver, directed by Adam Zane, performed by Joyce Branagh, Ralph Bogard, Matthew Forey and Joey Ethan) is a gloriously camp caper set in a gay sauna that manages to capture the high stakes and frivolity of films like Death Becomes Her and Clue despite having a cast of four, half of whom are only wearing towels.

OutStageUs feels revolutionary because it is. LGBT+ stories are very rarely written and performed by LGBT+ people; let alone in such a variety of genres. They are scarcely allowed to exist as ordinal as they do here. Each character in every story felt complex and fully realised, and their identities were a crucial part of them.

OutStageUs is at The Lowry Studio until Thursday 29th September 2022, tickets can be purchased here