REVIEW | Nothing’s going to rain on this Parade

A three and a half week run as part of the Hope Mill Theatre’s inaugural season brings a rare opportunity to see the revival of Parade, a double Tony-Award winning musical but much-underperformed work 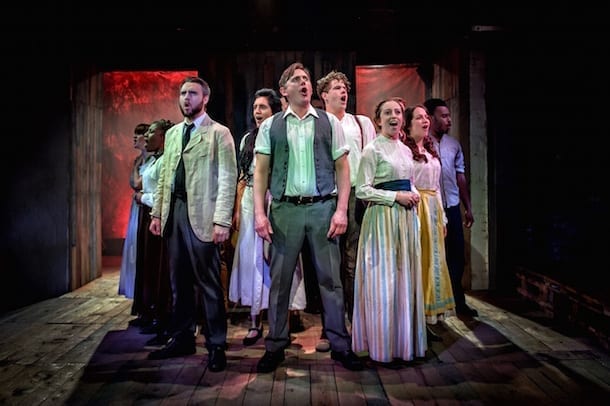 Written by Alfred Uhry (Driving Miss Daisy) and with a score by Jason Robert Brown (Songs for a New World, The Last Five Years, Bridges of Madison County), Parade has a great pedigree.

It’s a musical through and through. I didn’t sit there with a stopwatch, but it felt as though there was more singing than spoken dialogue in the show, which makes a wonderful change.

Having said that, this isn’t a camp ‘tits and teeth’ show. Director James Baker calls it ‘a beautiful story told with honesty and truth.’ Based on a heart-wrenching true story, Parade could more properly be described as a musical which is filled with soaring music, offering a moral lesson about the dangers of prejudice and ignorance that should not be forgotten. At times, it can be downright bleak.

In 1913, Leo Frank, a Brooklyn-raised Jewish man living in Georgia is put on trial for the murder of 13-year-old factory worker Mary Phagan. Already guilty in the eyes of everyone around him, a manic journalist and a number of false testimonies see him convicted of her murder. His only defenders, ultimately, are a governor with a conscience and his wife, Lucille, who finds the strength to become his greatest champion.

Tom Lloyd’s performance as Leo Frank is intense. The writing makes him a difficult character to sympathise with, particularly in the first half, even though he seems to be made a scapegoat for the murder of little Mary. 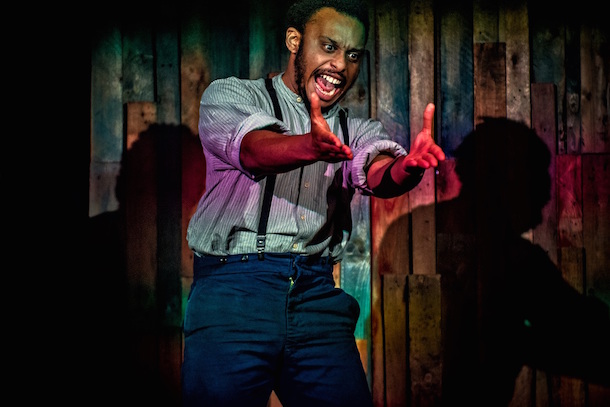 An outsider in Georgia, he conveys the sense of desperation yet resignation well. Laura Harrison’s portrayal of his dedicated wife Lucille is heartfelt and provides an excellent contrast to the initial harshness of Leo. She performs the role with aplomb and her solos are one of the vocal highlights of the show.

A number of the 15-strong cast have several roles to juggle between them. While it makes perfect sense for a number of the more minor character to slip in and out of other roles and the ensemble, I did find it slightly disconcerting that Megan Ormiston (Mary Phagan) seemed to come back from the dead to enjoy a tea dance before going back to playing Mary in flashbacks.

I wrote about A Rumblin’ and a Rollin’, one of the numbers performed by Matt Mills (Riley, Newt Lee and Jim Conley) and Shekinah McFarlane (Angela and Minnie), at the sneak preview event last month. They’ve maintained the energy, enthusiasm and passion for the show that was so evident even during rehearsals. Let’s hope they can keep it up for the rest of the run.

My one complaint about the show is the sound levels. Great 90% of the time, there are parts that are too loud and the balance is off. In particular, when the ensemble is singing together, there is a phenomenal sound that I felt was detracted from by over-amplification. I understand the need for the cast to have microphones to ensure that there is a balance of sound, but to have so many strong singers in a relatively small space then amplified was overegging the pudding for me. Having said that, I defy anyone not to feel moved by Aidan Banyard (Young Soldier and Frankie Epps) and the ensemble in the rousing show opener, The Old Red Hills of Home.

But for the size of the theatre, to describe this as a fringe production feels like a disservice. The singing is, almost without exception, excellent, and is well supported by the nine-strong orchestra.

If you have not been to the Hope Mill Theatre before, this is the perfect introduction to this new space squirrelled away in Ancoats.

Tickets are £16-20 plus booking fee and are on sale now at ticketsource.co.uk/hopemilltheatre