All foodie eyes – and social media attention – have been focused on the opening of Aiden Byrne’s fine dining restaurant at the top of Number One Spinningfields, as my colleague Louise Rhind-Tutt observed in her recent review of 20 Stories.

Meanwhile, down at ground level, unnoticed amid the fanfare for 20 Stories, Paul and Kathryn Roden, owners of Grafene, have been busy pulling off a very significant culinary coup.

Head chef Ben Mounsey may still only be 29, but he arrives at 55 King Street with a formidable CV and a toque full of ideas.

He was head chef at the three AA Rosette Lawns Restaurant in Thornton Hough on the Wirral For two years, and for two years before that sous chef at Marc Wilkinson’s Fraiche in Oxton, which, in my opinion, is the best restaurant in the north west.

An ever present in the Sunday Times’  Top 100, Fraiche boasts four AA rosettes and a Michelin star for 10 successive years. A six month wait for a table there is not unusual. 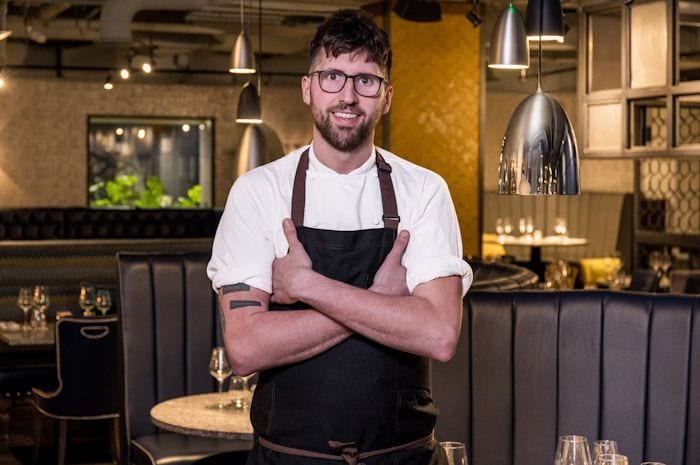 When my wife and I went for dinner at Grafene recently, we discovered a superbly devised and executed menu suggesting that you may be able to take Ben Mounsey out of Fraiche, but you can’t take Fraiche out of Ben Mounsey.

Grafene – its name is inspired by the wonder material graphene produced at the University of Manchester – strikes a vaguely industrial pose, especially in the bar area with its tiles, functional furnishing and exposed pipework and ducting overhead.

The dining areas are only slightly softer in tone. The back of our black leather upholstered booth looked like a galvanised steel bucket – but the polished granite tables and the pendant lighting reflect a businesslike mood and boy did Mounsey do the business.

Given the quality of the ingredients and the talent on display, the menu offer of three courses with bread and “surprises” for £45 a head represents remarkable value.

Bread gets a mention because Grafene bread and butter comprises two just-baked mini loaves, one rye bread flavoured with treacle and paired with corn butter, the other flavoured with Henderson’s Relish and served with butter and tomato salt.

Then came the first surprise (adding unbilled courses was a Fraiche trick too) – a cube of hot smoked salmon with its crisped skin on a squid ink bagel with scrambled egg foam. Exquisite. 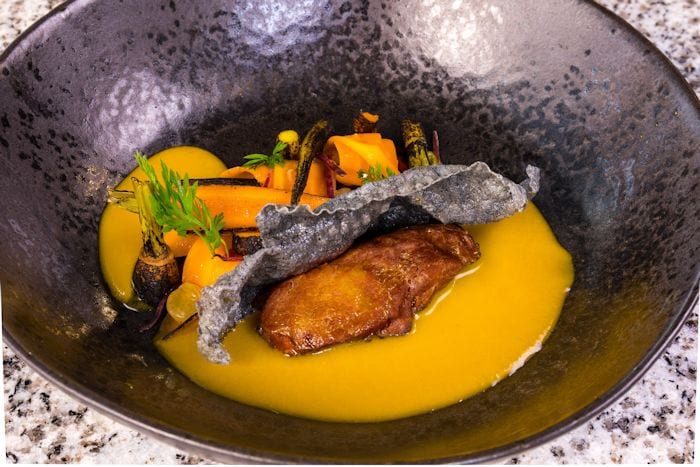 My starter proper brought a succulent nugget of pork cheek with carrot veloute, curry, golden raisins fermented in grape juice and a “graphene” charcoal cracker. Mrs K had fresh crab served with its brown meat devilled in an intense bisque with barley, slivers of piquant radish and nasturtium petals. Both were bursting with daring but symphonic flavour sensations.

We both chose fish dishes as main courses. Stone bass for me, monkfish for herself.

The stone bass, sweet and soft under its crisped skin, was partnered with smoked eel, the sweetest onions, pearls of apple, creamy mashed potato and a curl of salsify, a heady combination.

The monkfish was torched, inducing a lovely smoky nuance, and served with a stunning ensemble of kale, baby turnip, linseed and urchin butter. Epic dishes that were at once challenging and playful on the palate.

Desserts were no less sensational. After another “surprise” – smoked fresh coconut  with coconut sorbet and fruit punch -I chose Eccles cake, or rather a tantalising deconstruction of that prosaic local pastry, made poetic with fat currants in yoghurt, butter and tea syrup and partnered with savoury Lancashire Bomb ice cream. 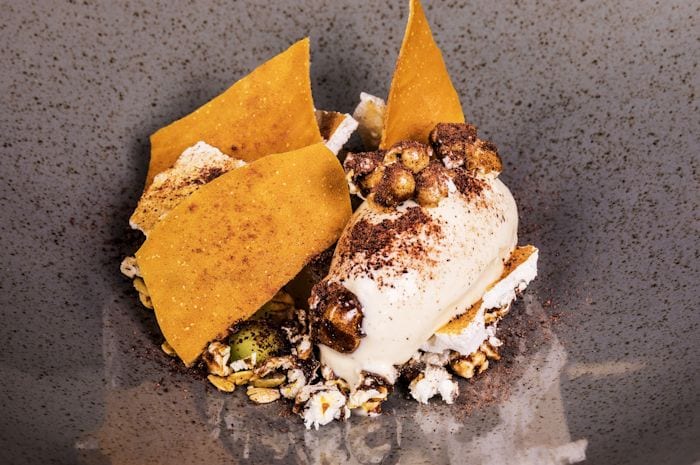 Mrs K had Sally Cinnamon – named after the Stone Roses’ song – in a bid to learn how you nimixtilise a melon. We were not much the wiser after she’d finished the masterful confection of popcorn, melon balls and granola, but she’d thoroughly enjoyed a rare treat.

Five and seven course tasting menus are also available for £45 (£35 vegetarian) and £65 (£55) respectively, and Mounsey’s outstanding cooking is also manifest in a unique British tapas menu drawn down from the dinner menu, available all week at lunchtime and between 5pm and 6.30pm.

It features a dozen or so small plates including burnt ends of brisket, peas pudding and roasted onion; salt cod, saffron and leeks; curried mussels; rendered duck leg, herbs, beet and piccalilli; Manchester rarebit; and a small version of that superb crab starter. Three plates are £17.50 and five £25.