Review: Jitney is a gripping play about love, life and friendship 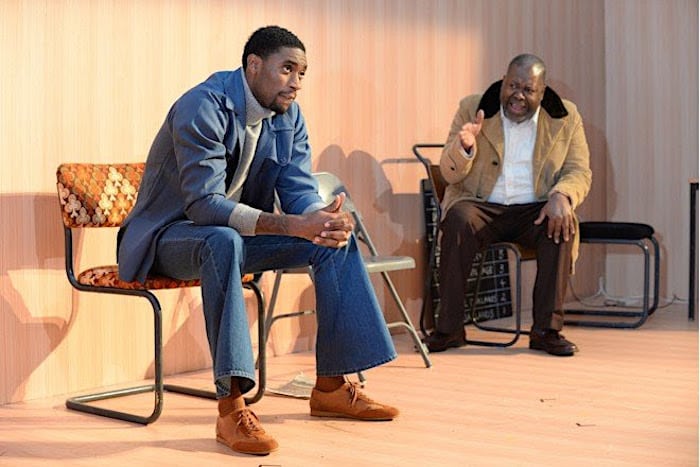 Based in Pittsburgh in 1977, the main set of Jitney, currently at the Oldham Coliseum, is the jitney station that all the characters work at.

Having studied Fences, I love how raw and real August Wilson writes his plays. He isn’t ashamed of the things he writes, because he’s writing how the world used to look like, and most writers tend to leave that part out and make it as a warm fairytale – when in fact, it never was.

The acting in this play is phenomenal. Every actor brings their heart and soul to the performance and should be congratulated.

A highlight is Wil Johnson, who plays the owner of the jitney station Becker. Johnson carries the show with his stern looks and his argumentative outbursts.

He also has a monologue at the end of the first act which has the audience gripped and on the edge of their seats.

Solomon Isreal plays Youngblood, who’s a young driver wanting to provide for himself and his family.

Israel had many thrilling moments, but one in particular has the audience gasping. His chemistry and tension with Turnbo (played by Sule Rimi) has us holding our breath every time they share the stage.

The play was written by August Wilson, and you can tell.

Wilson has a way of portraying black lives in the rawest form. He uses the ‘n word’ almost as a power move. Every time one of the actors says it, you can see the audience wince at the sound of it.

In a way, I think that’s what Wilson wanted – to bring power and ownership of the word that has and still is used against black lives.

Elliot Griggs uses orange as the main colour of light on the stage. The play is based in the 70s, with orange and brown being two very popular colours at the time, and Griggs does a fantastic job of using it to set the scene and play.

The set has the audience in awe. There is a prism that has a cut out where the stage is with all the set pieces. It’s a unique stage set up but used very effectively.

Alex Lowde has done a spectacular job with the set and the costumes. Sticking with the brown theme, all the characters have an item of brown in their wardrobe.

When the scene changes, the actors move around the stage, fixing certain props to fit the next scene.

At one point, Solomon Isreal (Youngblood), Geoff Aymer (Doub), Tony Marshall (Fielding), and Sule Rimi (Turnbo) all move positions while sitting down to showcase time and their thought process.

It’s a very creative way to transition into the next scene and is executed perfectly.

While this happens, there’s music and sound effects of the outside world to enhance the play’s surroundings. Max Perryment has done an exceptional job with the sound design.

Overall, Jitney is a play that leaves you feeling full of emotions and full of tears.

Jitney is at Oldham Coliseum until Saturday 16th July. Tickets are available here.