Review: Jersey Boys is “phenomenal and a real crowd pleaser” 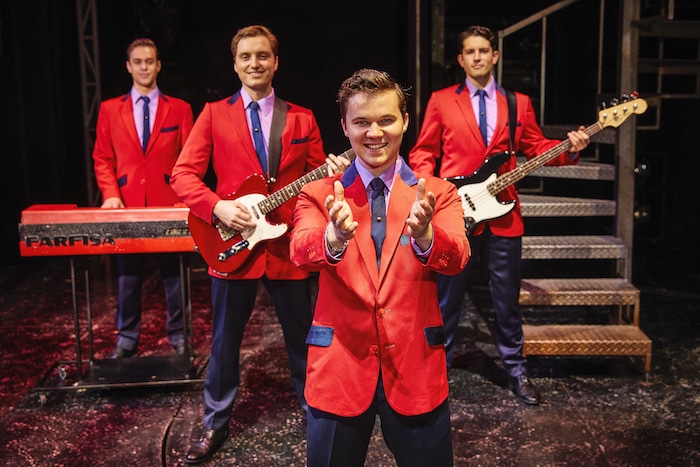 Based on the book by Marshall Brickman and Rick Elice, the musical adaptation of Jersey Boys brings to life the story of Frankie Valli and The Four Seasons on the stage of Manchester’s Opera House. Direction from Des McAnuff, with choreography by Sergio Trujillo, and composer (and original member of the Four Seasons) Bob Gaudio produces a quirky but hilarious dramatized retelling of what may be an unfamiliar story for many UK audiences.

Four guys from the streets of New Jersey are trying to make a name for themselves in the music industry.

Between stints in jail, scams, and playing in The Silhouettes Club, these enthusiastic lads just cannot catch a break.

Each member of the band takes a turn at narrating the journey of their way to the top – but not everyone remembers it the same way. Each character’s narration provides a useful insight into the different personalities of each man.

Tommy DeVito (Dalton Wood) introduces us first, playing the role of the gangster who always gets what he wants. Initially a third of the trio that later becomes The Four Seasons, he and his two other bandmates are never out of jail long enough to actually play together.

Tommy stands by the fact that there would be no Four Seasons without him, and that he makes all the decisions that leads them to the point of success. Bob Gaudio (Blair Gibson) on the other hand is a vital part in writing and producing many of their smash hits, and so firmly believes his role to be most crucial.

While Frankie Valli (Michael Pickering/Ryan Heenan) remarks that he is the leading man with the strongest voice that defines the sound of Frankie Valli and the Four Seasons. Nick Massi (Christopher Short) makes a lesser claim; simply the band needs four members and he is along for the ride, and referring to himself as ‘the Ringo Starr of the group’.

On this touring production of Jersey Boys, Frankie Valli is portrayed by Michael Pickering, and at certain shows, Ryan Heenan. You are in for a real treat if you attend one of Heenan’s performances.

His voice is extraordinarily balanced between his full voice and his falsetto which pays wonderful homage to the real Frankie Valli and perfectly attributes him into that role.

His performance of Can’t Take My Eyes Off You is nothing short of phenomenal and a real crowd pleaser.

Wood is a convincing, intimidating ganger as Tommy, but he also allows us to see two sides of him – one side where he is controlling, violent, and another where he is seemingly more uncertain and unsure.

We hear more of Heenan’s and Wood’s voice than we do the other two, because at one time or another they were both the leading man, while Gibson and Short provide the wonderful harmonies and back up that are a key part of the Four Seasons sound, as well as playing keyboard and base, respectively.

The stage set is relatively simple, with two spiralling staircases which lead to a walkway across the top of the stage. This is a very functional set, allowing space for the ever-changing pieces of set that roll in and out at various points, creating atmospheres of jail; the Silhouettes Cub; tv studio; recording studio; and a bowling alley (where bowling balls are rolled across the stage floor!) as well as living rooms, car interiors, and many more.

Above the walk way is a screen that adds more context to whatever setting is occurring on stage, whether it be the name of the club, or a stylised backdrop of the location.

A particularly smart touch is the imitation of television broadcasting, where television cameras are rolled out to stream the live footage from stage on to the projection for audiences to watch; much like as if they are at home watching it on a black and white TV, dispersed with genuine older footage from the late 1950s and 1960s television studio audience.

The live band take residence on the stage, rather than in the orchestra pit which is always great to see!

Jersey Boys is a feel-good musical, and though audiences may be unfamiliar with the backstory of the Four Seasons, there is enjoyment to be found within.

This jukebox musical features songs you will already know, such as Shery, Big Girls Don’t Cry, December 1963 (Oh What a Night), Beggin’, and Bye Bye Baby plus many more.

The musical provides context and a special insight into those songs and what was going in the lives of the Four Seasons at the time of writing and recording them, and there are other names thrown around that you might just recognise.

What Jersey Boys does well is explore themes of gambling and debt without getting too dark, which comes with a brilliant dynamic shift in Act 2, while Act 1 provides more of an outsider’s view, Act 2 brings a shift in the dynamic and all the secrets start to spill out…

Jersey Boys has won 65 major awards across the decades; see what all the fuss is about and join the 27 million people who have already joined the party worldwide!

Tickets and more information about the show can be found here.

Please note, Jersey Boys is recommended for audience members aged 12+ due to the authenticity of New Jersey language that features in the production, which may be unsuitable for younger audiences.