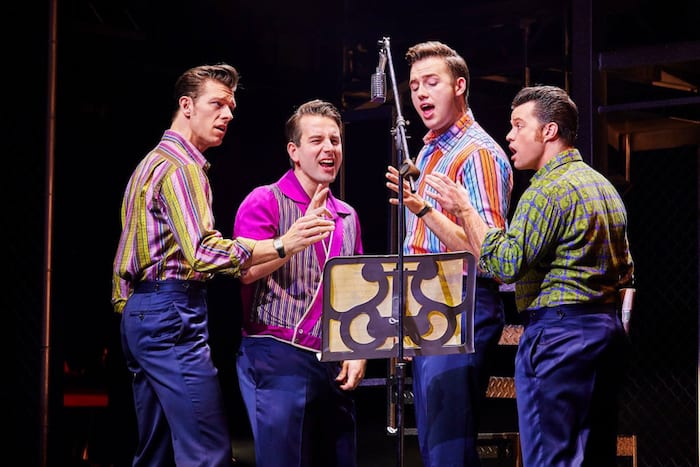 Not many musicals look behind the glossy façade of a clean-cut band adored by millions to reveal the darkness that haunted them once their fans had gone home? Tina, the new Tina Turner musical currently performing to sell out crowds, is doing that – but the singer’s struggles are well known.

The Four Seasons were never quite The Osmonds, but if you were a fan you would probably never have guessed what was going on behind the scenes. The catchy hooks and corny choreography meant they attracted a fan base which was attracted to them because they appeared wholesome.

One of the key selling points of this superb show is that you hear four versions of the same story. Every band has its problems – the egos, the itchy feet within the band, the arguments about the material and who is the lead.

This is all evident here but mixed in with this is a sense of genuine peril and darkness, as founding band member Tommy De Vito’s debts spiral out of control. 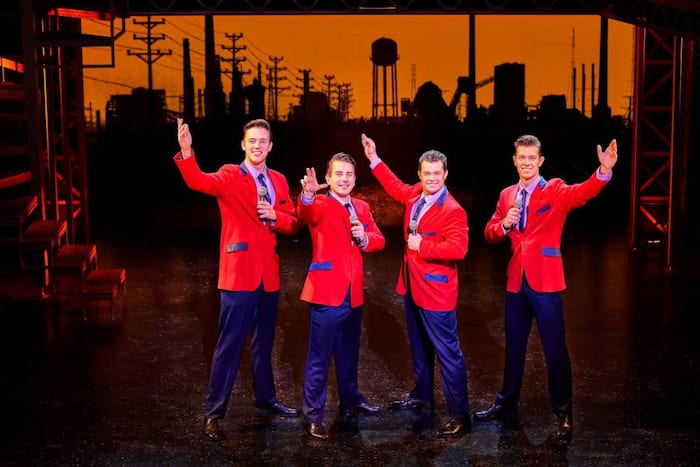 Peter Nash resists the urge to play this bad apple as just that. He conveys his humour and charm, as we need to see why the other band members didn’t just put up with him, but also liked him as a friend.

Declan Egan plays the reluctant band member Bob Gaudio (who would prefer to be back stage writing) with a genuine likeability. He has a great connection with the audience, and his vocals and stage presence shine during the huge hit December, 1963 (Oh What a Night!)

With his Chris Isaak style quiff, Lewis Griffiths is completely engaging as Nick Massi. The quiet member of the band may not say much, but he has some cracking lines.

Michael Watson plays the voice, Frankie Valli. Most UK fans of the show will have seen the wonderful Ryan Molloy and he takes some beating. But Watson makes the role his own and proves to be a great showman during the big, bold numbers. He explores the character’s vulnerability and selfishness as fame and money take over.

Women do not get a great deal in this show but Tara Young imbues Mary Delgado (Frankie’s first wife) with genuine Italian feistiness and a down to earth appeal. She can see that, behind the glitz and glamour, Frankie cannot cut it as a family man – which is ironic considering the band’s cookie cutter appeal.

There is the odd flaw in the show. Frankie’s daughter Francine is severely underwritten, so even though her plight is tragic, you do not really know enough to feel the pain. And the lack of a full blown megamix at the close means the audience are not given a chance to go full throttle and throw some shapes to the beguiling Beggin’.

But with Woody Allen collaborator Marshall Brickman and Cher Show writer Rick Elice in charge of the book, the humour and grit comes thick and fast, and the pace is just right thanks to Des McAnuff’s confident direction.

Jersey Boys is so much more than a gallop through The Four Season’s greatest hits. It has drama, comedy, dark moments, and despair.

But, more importantly, the show’s strength is that it feels as if it has been put together with love and passion. This comes across in the performances from the leads and, by the end of the show, you are left beggin’ for more.

I see many musicals and some are overhyped and disappoint. But I could not take my eyes off Jersey Boys and I loved every minute. It is that good, I could go back for some Amore.

Jersey Boys is at The Palace Theatre until 16th February 2019.