Review: Hedwig and the Angry Inch is a supernova of a show 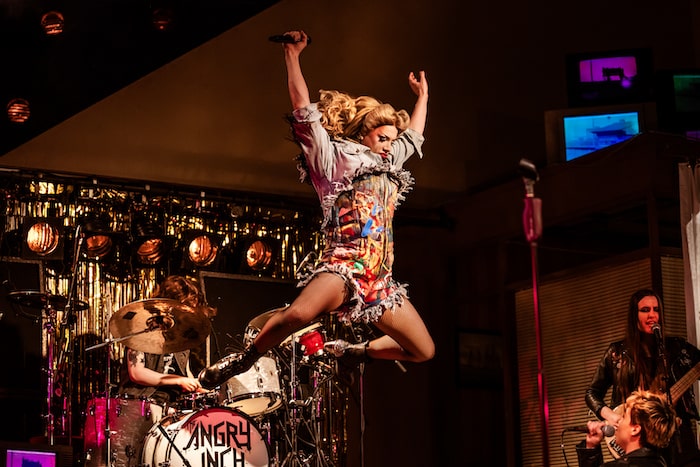 Hedwig and the Angry Inch tells the story of Hedwig Robinson, an ‘internationally ignored’, genderqueer rockstar as she tells her life story up to this point.

Born in communist East Berlin, Hedwig marries an American soldier to escape. The marriage breaks down after a year and Hedwig is left alone in a trailer park before deciding to reinvent herself.

Working as a babysitter while she plays shows in dive bars, Hedwig meets Tommy, who later becomes a famous rockstar when he steals songs Hedwig wrote.

Fuelled by equal parts glitter and spite, Hedwig is attempting to clear her name and tell her story after she and Tommy end up in the tabloids following a car crash.

From the moment it begins, Hedwig is a supernova of a show.

Funny, tender and captivating, it offers a personal look into the more intimate aspects of the trans experience, as Hedwig searches for her ‘other half’ and struggles to bridge the gaps of her identity.

Davina de Campo (Rupaul’s Drag Race UK) is a force of nature, she sang every note and delivered every joke perfectly to a rightfully appreciative crowd.

Her energy never wavered despite many complex dance routines that left me out of breath just watching.

Davina brings a warmth to Hedwig and handles the more emotive moments with a profound gentleness that massively contrasts the punk rock energy and ambition that seems to propel Hedwig across the stage.

She shows true range as a performer, switching from hilarious innuendo to vulnerable dialogue and back again in a heartbeat.

Her performance is truly unforgettable.

Elijah Ferreira (Safe, Hackney Empire) plays Hedwig’s husband Yitzhak, a former drag queen who has sacrificed his own success to be with Hedwig.

Ferreira is amazing and can more than hold his own on stage.

He has several scene stealing moments and a voice to be reckoned with.

This production is enhanced by the insular set that somehow manages to capture the essence of a community in Rusholme, a studio apartment in East Berlin and a trailer in Kansas.

The use of overhead projections enhanced the already stellar songs and the visuals added a poignancy to the show.

Each member of the  supporting band is also very very talented, with Francis Bolley on guitar, Isis Dunthorne on drums and Jess Williams on bass, they are each a vital part of the storytelling and overall performance.

It is wonderful to see the story being told so lovingly by gay and trans voices after a history of cisgender heterosexual men being cast in the leading role.

Hedwig and the Angry Inch offers a lifeline to trans and gender non conforming people, showing the complexities, challenges and beauty of existing outside societal norms.

Hedwig and the Angry Inch is at Home until Wednesday 11th May 2022. Tickets are available here.